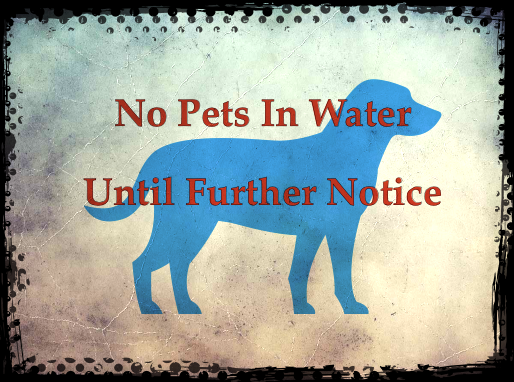 Reports of toxic blue-green algae lurking in local waters have some pet-owners justifiably concerned, as the single-cell stalker can be deadly to dogs.
Formally called cyanobacteria, blue-green algae actually isn’t an algae at all, according to the Bandera County River Authority and Groundwater District. The photosynthetic organism grows in large quantities that look like an “algae” bloom.
"It is also important to note that the blooms can form in numerous colors, including red and yellow,” the groundwater district said.
Blue-green algae can grow in a wide variety of conditions and can become dominant in nutrient-rich, non-flowing bodies of water with high temperatures. A characteristic of the cyanobacteria is the appearance of a blue-green paint covering the surface of the water.
BCRAGD said not all types of cyanobacteria found across the globe in both fresh and saltwater produce toxins. However, two forms found in Texas are known to be troublesome.
“In some cases, blue-green algae, particularly Anabaena and Microcystis, can produce toxins that are poisonous to fish and wildlife that drink water contaminated with the toxins,” according to Texas Parks and Wildlife. "Fish kills have occurred in private stock ponds as a result of blue-green algal blooms and there have been a few reports of livestock dying from drinking water contaminated with blue-green toxins. In addition to toxicity to fish and wildlife, there are documented cases of blue-green algal toxins harming humans in other parts of the world through the consumption of poorly treated waters.”
Dr. Heather Bullard, of the Hill Country Veterinary Hospital, said blue-green algae is very toxic to dogs and cats, and is toxic to humans also.
“Dogs are most commonly affected as they are more likely to be around a water source with the algae,” Bullard said. “The toxins produced by the algae cause death anywhere from minutes to hours after exposure.” Bullard said one type of toxin produced affects the liver and causes symptoms like diarrhea, vomiting and weakness.
“Another type of toxin produced causes neurologic symptoms like muscle rigidity and tremors, leading to seizures and death,” Bullard said. “There is no antidote for the toxin, and supportive care is usually not successful, unfortunately, so owners need to be vigilant in keeping their pets away from water with this algae.”
Complicating matters, not all bacteria/algae produce toxins, however toxins may be present in the water even if no algae blooms are noticed.
“If the bacteria are producing toxins at the time of the death of the bacteria, the toxins could still be present in the water. Therefore, just because there is no visible bloom, it does not mean that the toxins are not present. Conversely, just because a bloom is noticed, it does not mean that it is a toxic strain,” BCRAGD said.
To date, water quality tests have not indicated any toxic blooms of cyanobacteria in either the Medina River or Medina Lake.
“However, this does not mean that the bacteria is not present,” BCRAGD said. “With elevated temperatures and reduced flows, water quality has the potential to fluctuate.”
The Bandera Prophet is grounded on the premise that relevant news delivery is ever-evolving. Founded by newspaper veterans, the Prophet delivers up-to-date information by writers and photographers who combined have 50-plus years of experience in the field and newsroom. Completely free to readers, the Prophet is published on multiple platforms, and shared within the online community. No paywalls and no paid subscriptions
make news, sports, feature stories and more immediately available with one click of a button or one swipe on a keypad.
All content copyright property of The Bandera Prophet