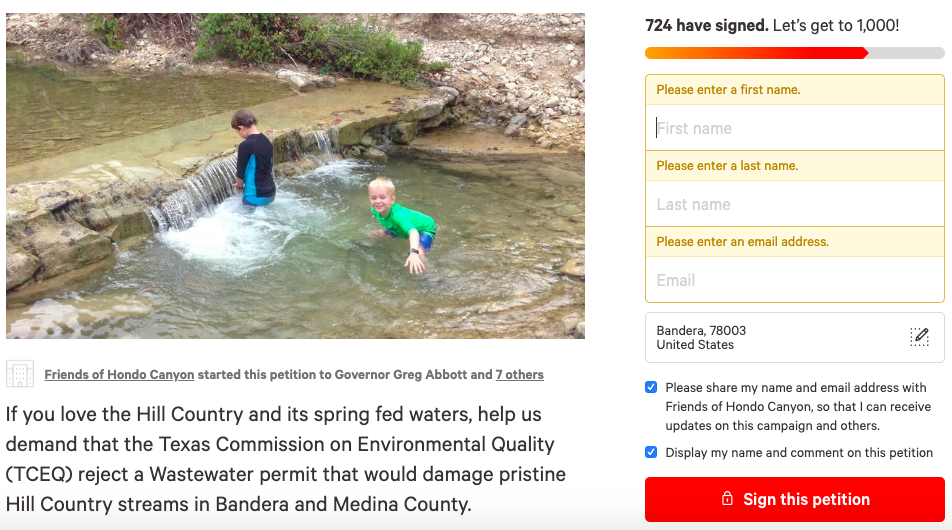 Contributed to the Prophet

The Friends of Hondo Canyon (FOHC) has launched a multi-week newspaper advertising campaign, on-line petition and social media outreach to mobilize opposition to a youth camp’s plan to release wastewater into the Upper Nueces River Basin. The landowner group has also set a community meeting for this Sunday afternoon, Aug. 18, to inform area residents about the petition and to organize efforts in advance of an official Texas Commission on Environmental Quality (TCEQ) Public Meeting later this month.  “We’ve had generous support from many landowners in the area that have helped energize our efforts. Everything we’re doing has been geared toward making people aware of the proposed permit and it’s potential impact on area streams and rivers,” Margo Denke, one of the founding members of FOHC, said.
The owner of a for-profit youth camp under construction by the owners of Camp Ozark in Arkansas has applied for the permit which would allow them to release treated sewage into the Commissioners and Hondo creeks, which flow into the Frio River and feed the Edwards Aquifer, FOHC said.
“The proposed permit would allow the camp to release of 25,000 gallons of treated wastewater each day into Commissioners Creek, which would increase to 49,000 gallons as the camp expands. This amount of treated wastewater would be like releasing a large swimming pool of treated sewage into a small trickling creek each day,” FOHC said. “The organizing efforts are underway in advance of an official public meeting that’s been scheduled for Monday, Aug. 26, in Bandera by TCEQ.”
The meeting was initiated after landowner protests and a request from Texas State Representative Andrew Murr of Junction.
“I requested the public meeting held by Texas Commission on Environmental Quality on this topic after several constituents contacted my office with questions and concerns. I believe strongly that the public meeting process can be beneficial to all parties to exchange information, learn how the permitting process works and evaluate the rights and interests they may have. I encourage folks to attend the TCEQ public meeting on Aug. 26 and learn about the potential opportunities to weigh in on the permitting process and find out more about the scope and type of permit(s) presently being sought,” Murr said.
If allowed to move forward, the permit would be precedent setting for the region and allow treated sewage containing high levels of nitrogen and phosphorus into streams where these nutrients are not currently present, FOHC said. These nutrients are the focus of concern because they produce algae blooms, which have gained negative publicity in recent days.
The FOHC is asking TCEQ to reject the permit in its present form and to convince the camp owners to change to a Land Application Permit that would not allow any discharges into the native waterways. Under this type of permit all wastewater would be used for irrigation and none would be released into the waterways.
The FOHC organizing meeting in Sunday, Aug. 18, at the old Tarpley School House, and the TCEQ Official Public Meeting where residents can register their opposition to the current permit is on Monday, Aug. 26, at the Mansfield Park Recreation Hall in Bandera.
The online petition is viewable at https://www.change.org/p/tceq-keep-spring-fed-creeks-in-texas-clean.
The Bandera Prophet is grounded on the premise that relevant news delivery is ever-evolving. Founded by newspaper veterans, the Prophet delivers up-to-date information by writers and photographers who combined have 50-plus years of experience in the field and newsroom.
Completely free to readers, the Prophet is published on multiple platforms, and shared within the online community. No paywalls and no paid subscriptions required, the Prophet is built on the belief that information is so necessary to our community, that it should not depend on your income.
At the Prophet, news, sports, feature stories and more are immediately available with one click of a button or one swipe on a keypad.
All content copyright property of The Bandera Prophet