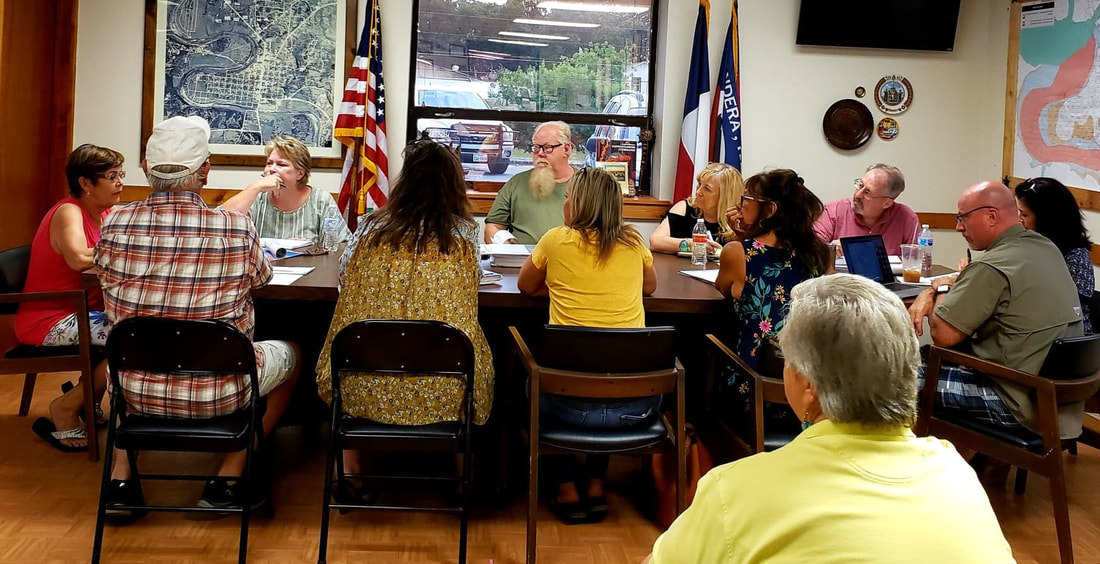 Bandera EDC board members and City Council members hold a joint workshop to discuss budget and other matters.

On the eve of Bandera City Council’s first reading of a resolution to authorize a $37,500 incentive expenditure to Tractor Supply Company, the Economic Development Corporation approved its budget, with the acknowledgment that it may need amendments by their next meeting.
Under its incentive program, EDC board members recommended giving Tractor Supply funding for job training and retention. The endowment, divided incrementally in $12,500 payments over three years, is contingent on the company creating at least six primary positions filled by Bandera County residents, a handicapped-accessible parking lot and the generation of at least $36,000 in sales tax annually.
During the public hearing in June, business owners and residents overwhelmingly disapproved of the funding, stating the billion dollar corporation did not need the money and giving it would create an unfair competitive environment in Bandera.
EDC board members last night discussed whether to leave the budgeted line item in place, or move it to an unrestricted fund in case City Council members vote against the incentive.
“A lot of people showed up with negative input,” EDC Board President Toni Kunz said, adding the funding cannot be released until after the second reading and the city’s approval. “I would like to see us leave it and earmark it for exactly what it was voted for.”
If City Council does vote against the measure, the money can then be moved in a budget amendment to another line item. The first reading is scheduled for tonight’s council meeting, at 5:30 p.m., at City Hall.
Other incentives approved and moving forward in the next fiscal year include the first payment of $12,000 to a hotel job training program. The total amount promised is $120,000 over 10 years. JW Land will receive their first of five infrastructure payments of $41,000, for the development of the land Tractor Supply rents from them. The Ranch House and Meat Market will receive their second of three $10,000 payments for jobs created, job training and renovating their building to be ADA compliant.
The Bandera Natural History Museum was approved for $30,000 to develop an art wing, payable in three increments, the first of which would be due this year.
Board members also approved last night a $4,000 grant to the Arthur Nagel Clinic for a new phone system. The new setup will replace what was originally installed in 2008, clinic Executive Director Chuck Lutke said, and will have a Spanish speaking option.
“I think this is a great service to the community,” EDC Board Member Tom McEachin said, adding that he would like to move forward with grants of this nature. “Not just for non-profits, but non-profits that provide valuable services to the community.”

Repossessed
In August of 2017, Abbe Boyd, of Mulberry Street Pub & Grub, requested and was granted a $6,000 EDC loan for a beer tap machine and bar stools. About two years later, she closed the restaurant, placed the equipment in storage, fell behind on her loan payments, and failed to communicate her intent to the board.
“What do we do now?” Kunz said.
McEachin said Boyd has had three months to come up with a business plan and has been asked to come to meetings. Board Member Andrea Cavanaugh said she saw the equipment for sale online, which Board Member Art Crawford said she later removed.
“That’s pretty clear to me that she does not want it,” Cavanaugh said.
After a few tweaks, Crawford’s motion that the EDC immediately take possession of the equipment passed unanimously.
“We have talked to her and talked to her,” Crawford said. “It’s just my personal feeling that she isn’t going to use it. Instead of rehashing this month after month, I think it’s better to take possession of it and find someone who wants to use it.” ​
The Bandera Prophet is grounded on the premise that relevant news delivery is ever-evolving. Founded by newspaper veterans, the Prophet delivers up-to-date information by writers and photographers who combined have 50-plus years of experience in the field and newsroom. Completely free to readers, the Prophet is published on multiple platforms, and shared within the online community. No paywalls and no paid subscriptions
make news, sports, feature stories and more immediately available with one click of a button or one swipe on a keypad.
All content copyright property of The Bandera Prophet