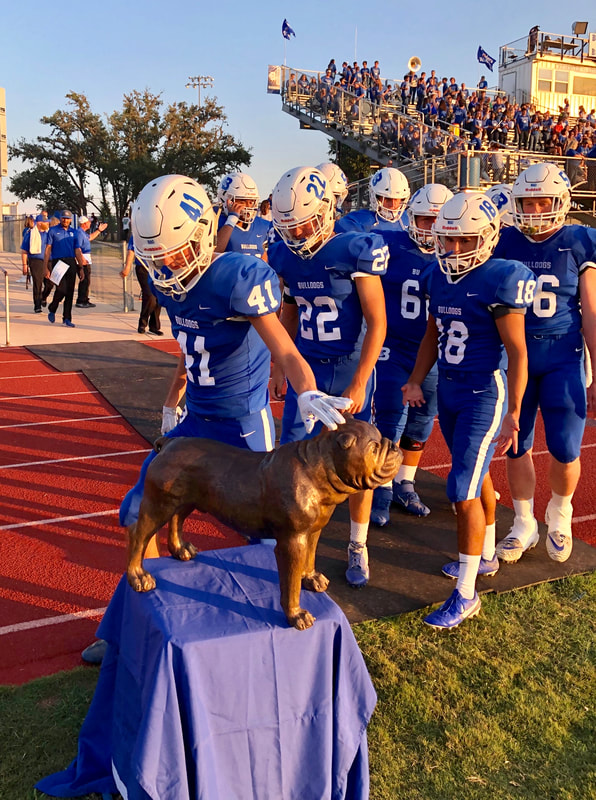 Following a recent tradition, Bulldogs recognize the bronze as they take the field at home. 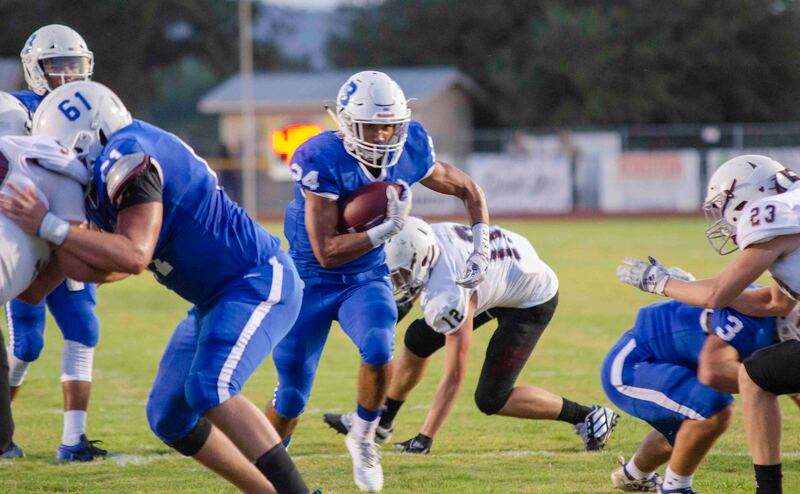 Tommy Cardenas runs through a gaping hole with Logan Williams (61) and Brock Johnson (3) leading the way. 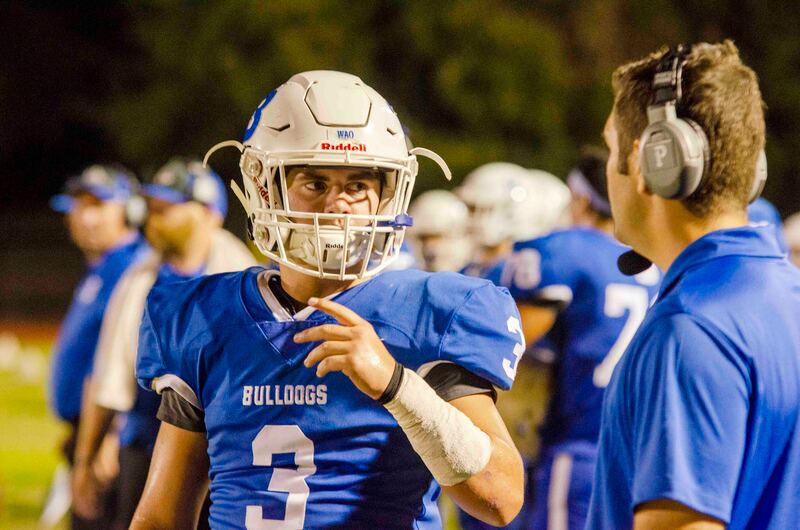 Brock Johnson and Head Coach Joel Fontenot-Amadee talk it up. 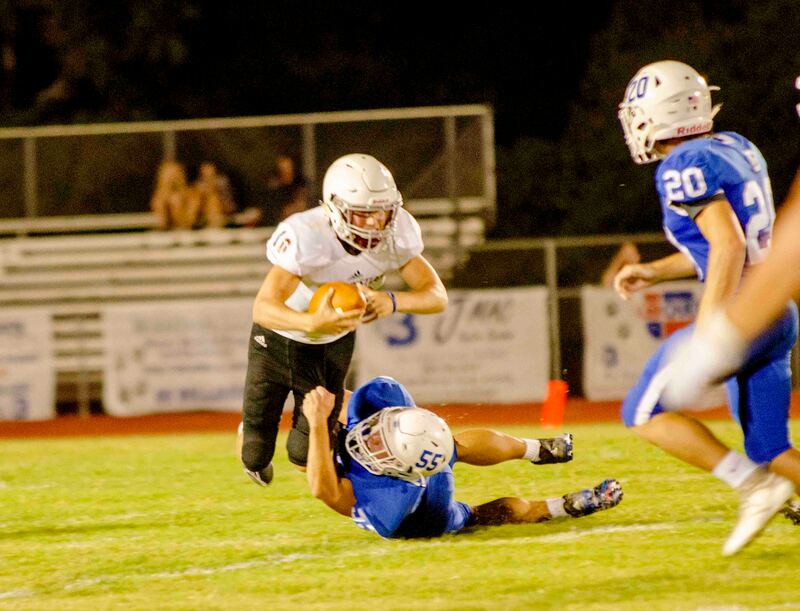 Bulldog Emmett Evans (55) is down but not out as he makes the proverbial "shoestring tackle" on the Lion QB. 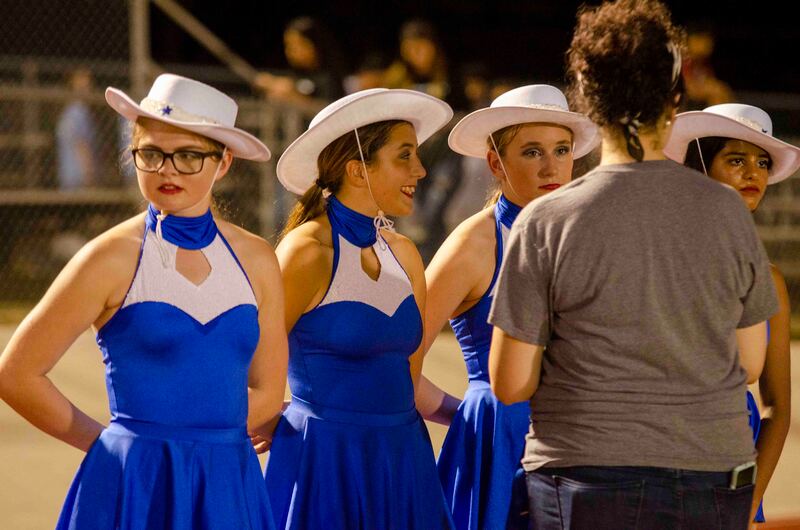 The Star Steppers dance team gets ready on the track before halftime. 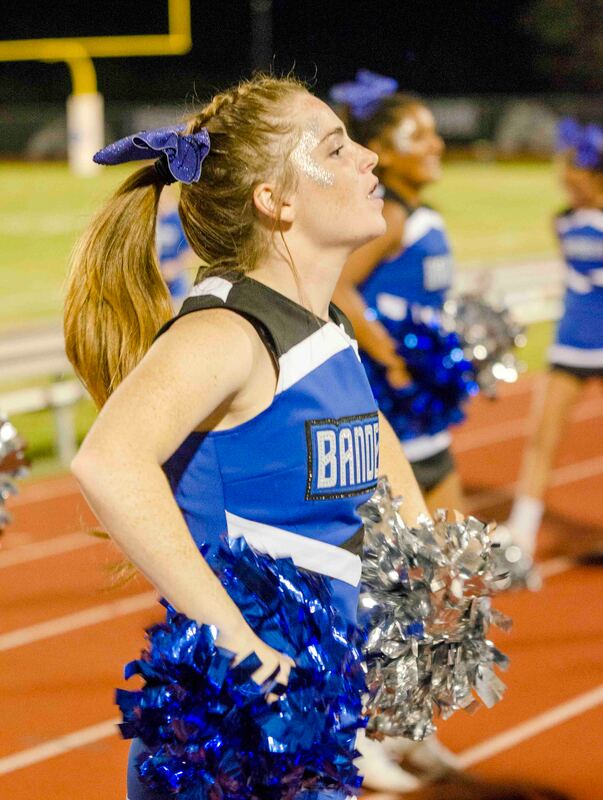 The Bandera cheerleaders help keep the crowd into the game during the 42-28 win over San Antonio Christian. 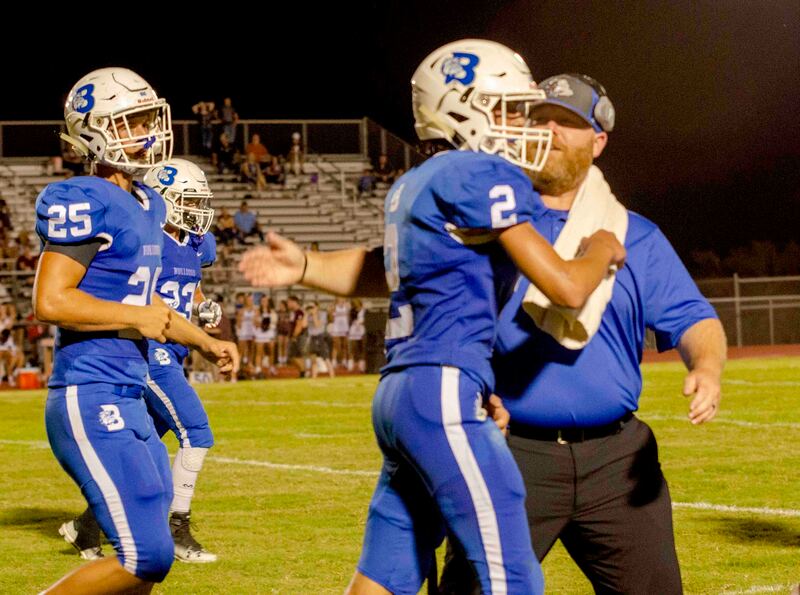 Gage Brown is congratulated by coach Bobby Lalanne after Brown's pick six late in the first half. 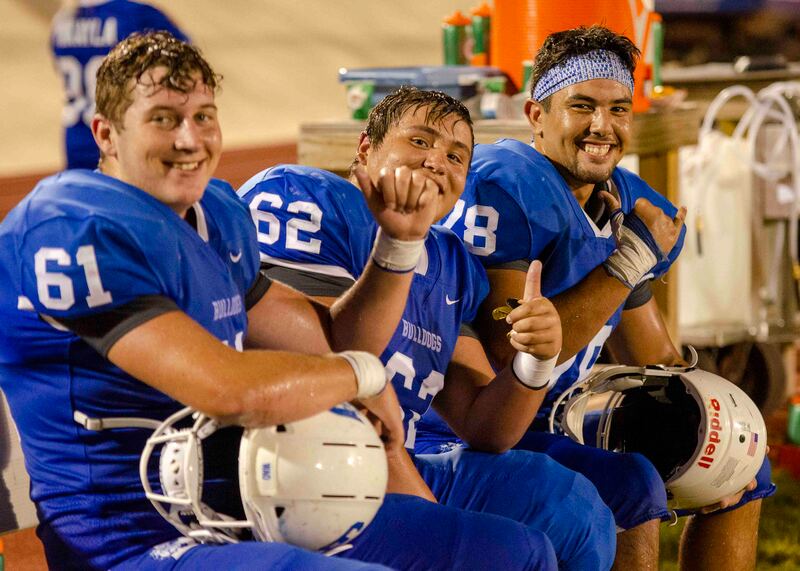 Three Bulldog linemen, aka Big Dawgs, Logan Williams, Austin Gauna and Colton Perkins, take a break in the last minutes of the game. 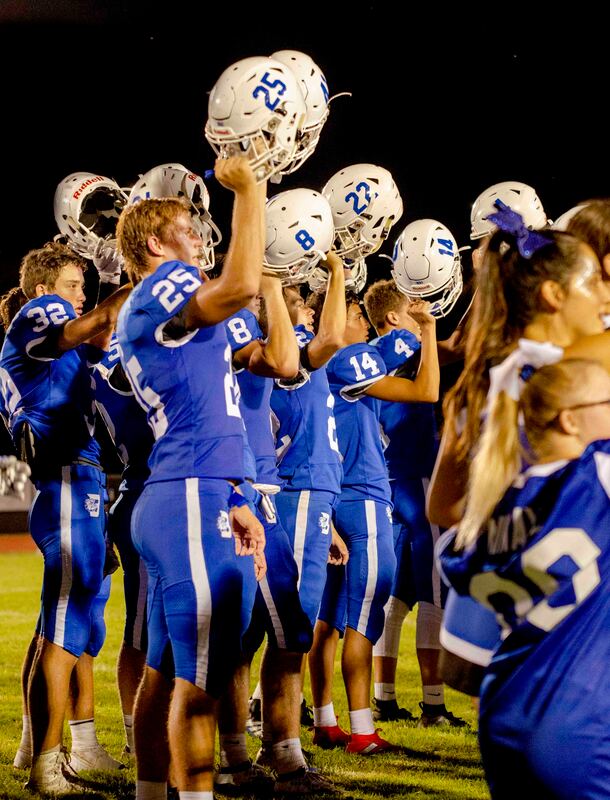 Ending in tradition, win or lose, the Bulldogs salute the Bandera fans at the end of the game.

The Bandera Bulldogs added three new pages to their playbook this past Friday: score early, score often and score through the air as they beat San Antonio Christian at Bulldog Stadium last Friday night, 42-28.
Bandera opened the game with two first downs on the first two plays from scrimmage, but stalled after getting stopped on a fourth and two, resulting in a turnover on downs.
SACS scored first on a 39 yard completion but the extra point misses to make it 6-0, Lions.
Bandera's fortunes changed later when Tommy Cardenas found paydirt in the first quarter with 1:41 left in the quarter on a six yard rush and Blaise Salazar, who had a perfect night kicking, put his first of six PATs on the night through the uprights, to make the score 7-0.
Early in the second, Bulldog QB, Solomon MacNeil hit Cardenas coming out of the backfield and the speedy running back outran the Lion defense for a 71 yard score after a field goal by SAC that made it 14 to 9, Bandera. A 40 yard field goal by SAC makes the score 14-12, and that was as close as it would get for the rest of the night.
Cardenas scored again on a 17 yard rush and a pick six by Bulldog DB Gage Brown would see the teams hit the locker rooms at the half with Bandera leading, 28-12. Mason Phair had scored for Bandera with 0:00 showing at the end of the second, but an offensive pass interference call negated it.
The teams traded scores in the third with Gunnar Brown fighting for the endzone from 34 yards out and SACS scoring their second touchdown of the night and converting a two pointer to make it 35-20.
MacNeil found Phair againon a play action pass for Bandera's final score of the night.
SACS added another 8 points via a touchdown and a two point conversion to make it 42-28.
Both teams did have a problem with penalties extending their opponents drives on numerous occassions, something both will need to work on as the season progresses.
Bandera saw early season highs of 292 yards on the ground, 149 passing and 441 total yards in an impressive offensive performance.
MacNeil led the Bulldogs, accounting for 285 yards, 136 yards on the ground and 149 yards passing. Surprisingly, those scoring strikes were MacNeil's first two touchdown passes as a varsity quarterback.
Coaches were quick to point out that the Bulldog offensive line had a good night that helped make the above totals and the 20 first downs Bandera recorded, possible.
Defensively, Bandera stayed upbeat while being on the field for 79 plays while yielding just 223 yards to the Lions, 189 through the air and a meager 34 yards on the ground, while recording four sacks and that interception by Gage Brown. Colton Perkins and Emmitt Evans were named Defensive Players of the Week and Ian Short was Special Teams Player of the Week. Short, a gunner on kickoffs and punts, had two solo tackles and was around the ball all night.
Looking forward to tomorrows game, St. Anthony has a 1-1 record, a 24-13 loss to the Center Point Pirates two weeks ago and a 48-6 whitewashing of Houston KIPP last week.
The game will take place at the University of the Incarnate Word, Friday night at 7:30 p.m.
Box score
1   2   3   4   Final
SACS          6   6   8   8      28
Bandera    7  21  7   7      42
Bandera stats:
Passing: S. MacNeil, 5-11-149-0-2
Rushing: MacNeil, 16-136, T. Cardenas, 8-57, B. Johnson, 6-68, Gunnar Brown, 3-42
Receiving: M. Phair, 2-33, Cardenas, 1-71, T. Moore, 1-34, Johnson, 1-11
Tackles: Gage Brown, 7, Emmitt Evans, 4, Gunnar Brown, 3, Tyler Moore, 3, Will Paul, 3
Assists: Garrett Meier, 4, Gunnar Brown, 2, Liam DeMarchi, 2
The Bandera Prophet is grounded on the premise that relevant news delivery is ever-evolving. Founded by newspaper veterans, the Prophet delivers up-to-date information by writers and photographers who combined have 50-plus years of experience in the field and newsroom. Completely free to readers, the Prophet is published on multiple platforms, and shared within the online community. No paywalls and no paid subscriptions
make news, sports, feature stories and more immediately available with one click of a button or one swipe on a keypad.
All content copyright property of The Bandera Prophet