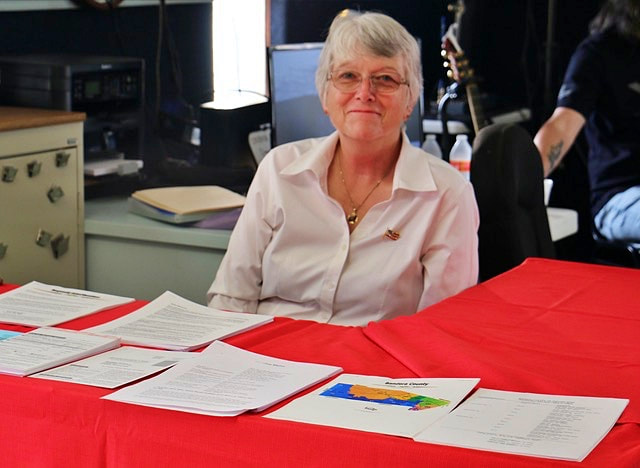 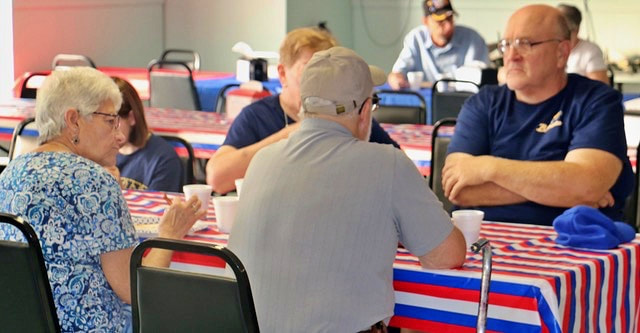 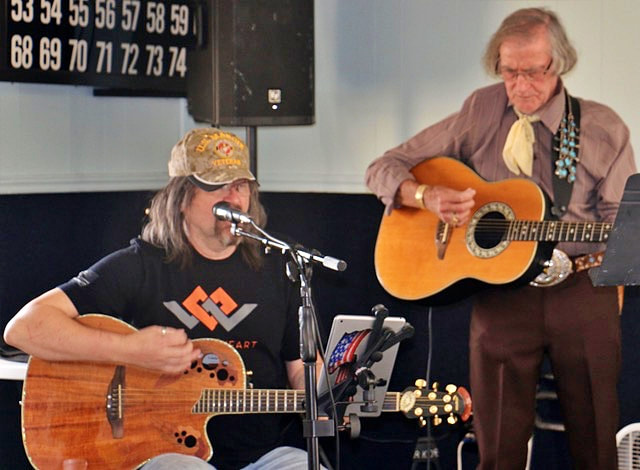 Local musicians brought special musical tributes and original songwriting to the Bandera American Legion Post 157 Community Breakfast on Saturday, Sept. 14. Visual effects were shown throughout the morning in photographs from the Twin Towers in New York, the Pentagon and Pennsylvania. Tributes, artwork and poetry were also included in the slides.
All ages attended, especially families and extended families. One grandfather enjoyed breakfast, and then went home to bring his grandson Noah back to not only have breakfast, but to meet the Army recruiter and learn about voter registration – and see the new historic uniform display. Two ladies from San Antonio on a mission to find out what to do in Bandera when their guests arrive next month stopped by clearly by accident. They stayed nearly two hours to eat and enjoy conversations, get local recommendations and “absolutely loved the music.”
Two veterans were introduced since they both live in Bridlegate: one an established Banderian and the other new to the community looking for work. Within five minutes, the new veteran was asked how soon he could start!
“You just never know what happens when you sit down, relax and talk to a new neighbor,” Gary Hetrick, retired Lieutenant Colonel, U.S. Army, said. “I’m doing the formal interview with Daryl on Monday and hope he choses my company.”
There was also a humorous marriage proposal between a customer and the lady who made the sausage gravy, because she could make such great gravy: at least we think it was in jest.
The Bandera American Legion Post 157 will soon celebrate its Centennial anniversary – a year after Congress chartered the American Legion to lobby and support our nation’s veterans. On July 30, 2019, President Trump signed new legislation called the LEGION ACT into law. Now anyone who has served honorably in federal military service since Dec. 7, 1941, is eligible to join.
Bandera Honors Veterans will be held on Nov. 9, 2019, featuring non-profit veterans organizations, special program with Andrew Murr, 53rd Congressional District Representative as keynote speaker, patriotic parade and veterans BBQ.
Everyone is invited to attend and participate.
For more information, contact the Post at 830-796-7528 or Susan at 210-788-9160. Thank you to all who Honored and Remembered 9-11.
The Bandera Prophet is grounded on the premise that relevant news delivery is ever-evolving. Founded by newspaper veterans, the Prophet delivers up-to-date information by writers and photographers who combined have 50-plus years of experience in the field and newsroom. Always free to readers, the Prophet is published on multiple platforms, and shared within the online community to more than 150,000 people. No paywalls and no paid subscriptions make news and feature stories immediately available with one click of a button or one swipe on a keypad.
​
All content copyright property of The Bandera Prophet