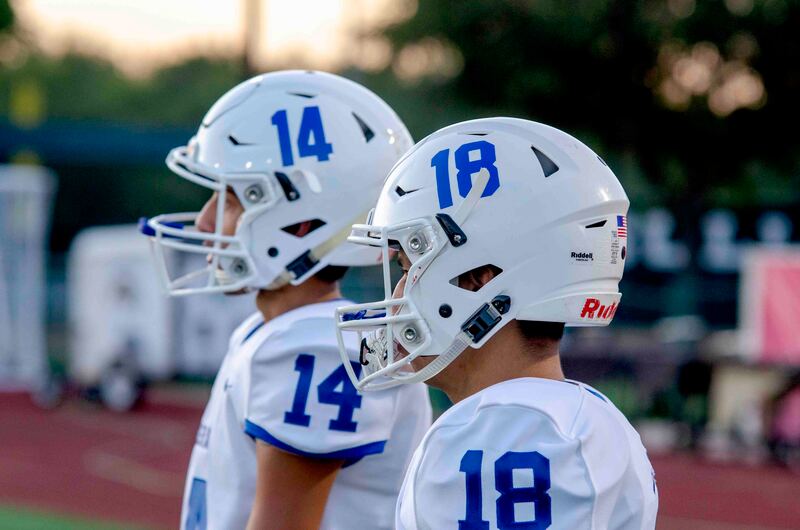 Bulldog kickers, Blaise Salazar (14) and Christian Gonzalez (18), have been an important part of Bandera's success this year. 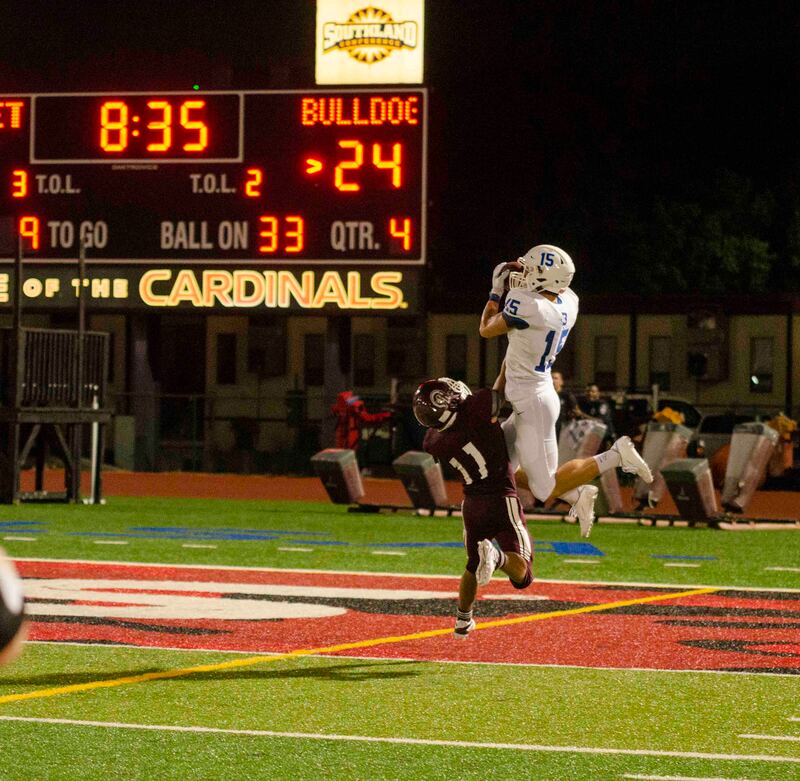 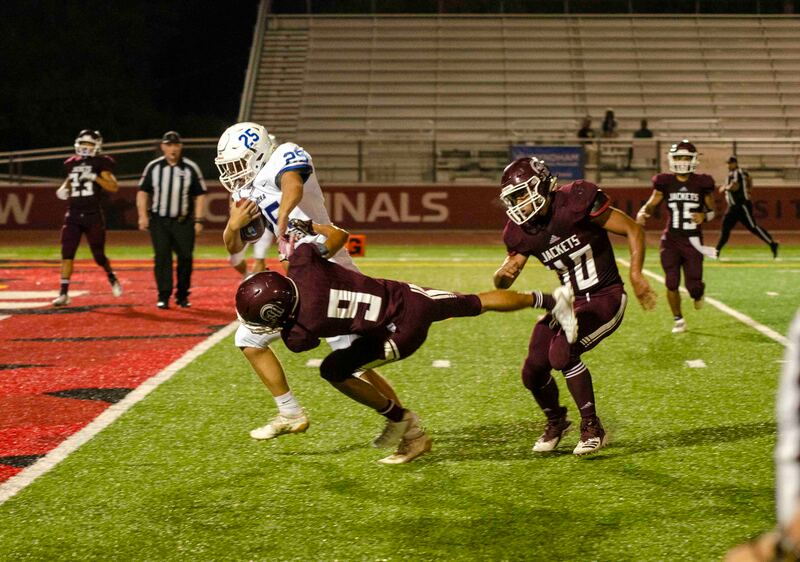 Mason Phair rumbles over a St. Anthony defender to score after hauling in a short pass in the third quarter. 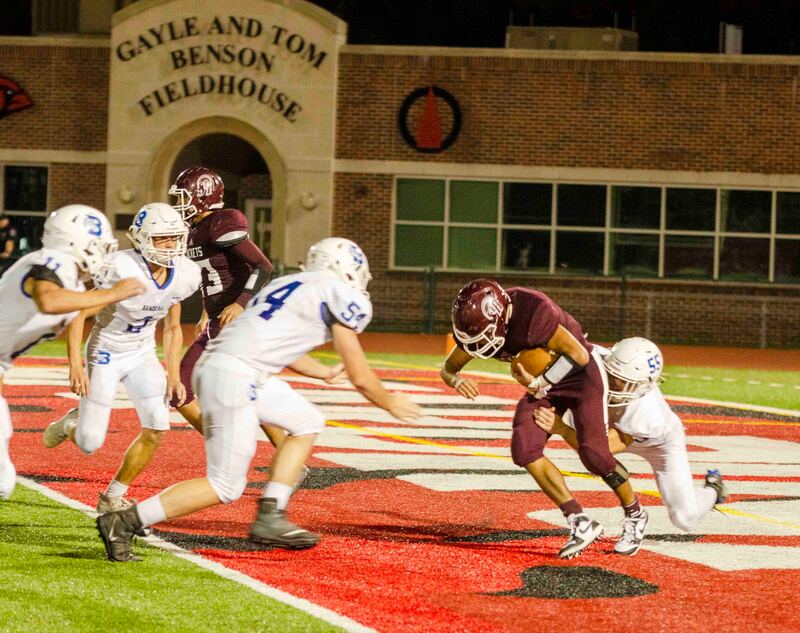 Bulldogs Mason Musik (54) and Emmitt Evans (55) combine for a safety late in the game. 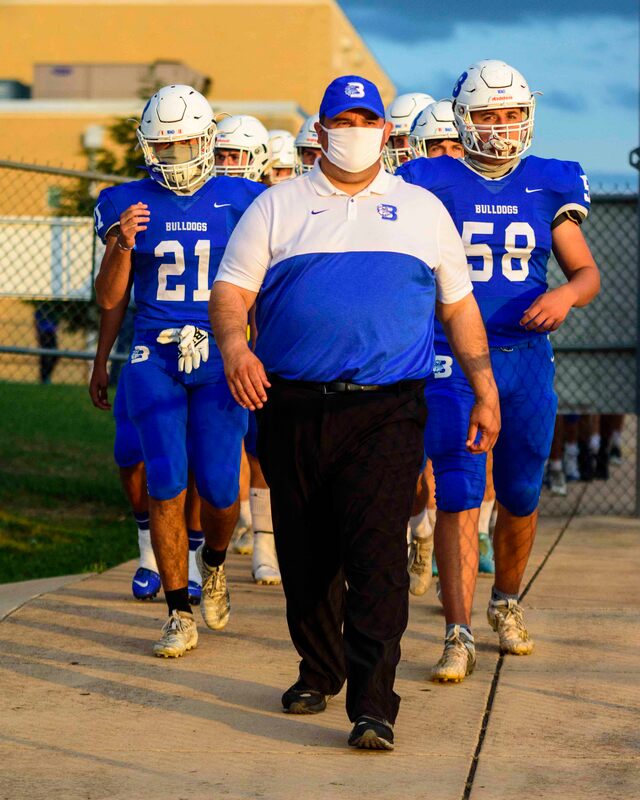 Coach Manny Martinez addresses the team after the game.

For the first time in 15 years, the Bandera Bulldogs are 3-0 after a 40-12 victory over the St. Anthony Yellowjackets at Tom Benson Stadium on the  University of the Incarnate Word campus Friday night.
After a scoreless, hard fought first quarter, Bandera got on the board just seven seconds into the second quarter with a 28-yard Blaise Salazar field goal.
St. Anthony answered with a touchdown late in the half, on a third and goal to go, but Tommy Cardenas blocked the PAT to keep it at 6-3.
Cardenas, Bandera's Special Teams Player of the Week, took the following kickoff 95 yards, crossing the goal line 12 seconds later and Salazar makes his first of five PAT's on the night, to give Bandera a 10-6 lead with 55 seconds left in the half.
Bandera opened the game up in the second half when Bulldog QB, Solomon MacNeil, scored on a 55 yard keeper with 6:43 left in the third and Salazar's kick makes it 17-6.
Inside the St. Anthony 20, MacNeil finds Mason Phair for a short completion, and Phair runs over a Yellowjacket defender at the three yard line to score with 2:54 left in the third. Salazar stays perfect on the night to drive the score to 24-6.
St. Anthony scores on a 35 yard reception with 13 seconds left in the period and the point after attempt fails, to make it 24-12.
The fourth quarter saw Bandera add three more scores, the first via a MacNeil to Austin Abitz 33-yard reception with 8:33 left in the game and Salazar's kick makes it 31-12.
With the Yellowjackets pinned deep in their end of the field just 14 seconds later, Bulldog defenders Mason Musik and Emmitt Evans, combine for a safety when they tackle the St. Anthony ballcarrier in the endzone to make it 33-12.
Cardenas finds the endzone on a short rush with 3:29 left and Salazar's fifth PAT of the night is good, for Bandera's final point of the evening, making it 40-12.
Offensively, the Bulldogs were down just a bit from the prior week with 334 yards of total offense on 62 plays from the line of scrimmage.
MacNeil led the team with 115 yards rushing on 12 carries and added 101 yards through the air.
"People tend to key on Tommy (Cardenas) and that opens it up for us. We have five guys we aren't afraid to let carry the ball and in any formation, we will give the ball to any of them," coach Joel Fontenot-Amadee said.
Defensive Co-Ordinator, Manny Martinez, brought his "Wrecking Crew" defensive scheme to Bandera this season and the players have bought into it 100 percent. He has had success with undersized defensive lines at other schools and the swarming, get as many people to the ball carrier as possible mentality is a good fit for the Bulldogs.
Senior linemen, Evans and Colton Perkins, were named Co-Defensive Players of the Week for the second week in a row. The two anchor the Bulldog defensive corps that allowed just 151 yards rushing and 0 passing yards while recording three sacks in Friday night's win.
"Coach Martinez really has the guys going on defense. We started a little slow, but give St. Anthony's credit, they executed really well in the first half. They had a good backfield and were faster in person than they looked on film. They made us come out and earn it," Fontenot-Amadee said.
Winning has been good for attendance as it is noticeable the stands have less seats available than in the last few seasons.
There will be even fewer seats available this Friday as Bandera hosts Comfort for Homecoming. The 2-1 Bobcats lost to Lago Vista last week, 20-10, and will be looking to knock the Bulldogs from the ranks of the unbeaten.
"Comfort is a good football team, they are kind of like us, they do what they do and do it well. We are excited, ready and up to the challenge," Fontenot-Amadee said.
Game time is 7:30 p.m., but you might want to get there early for the Homecoming festivities and  hopefully, find a seat!

Bandera stats_
Passing: S. MacNeil, 5-14-101-1-2
Rushing: MacNeil, 12-115, Cardenas, 13-54, Brock Johnson, 3-43, Gunnar Brown, 2-14
Receiving: Abitz, 2-54, Phair, 2-39, Trace Decker, 1-8
Tackles: Liam DeMarchi, 4, E. Evans, 4, Tyler Moore, 4, Gage Brown, 3, Garrett Meier, 3, Mason Musik, 2,
C. Perkins, 2
Assists: DeMarchi, 3, Meier, 3, Gage Brown, 2, Gunnar Brown, 2, Decker, 2, Johnson, 2, Musik, 2, Perkins, 2
The Bandera Prophet is grounded on the premise that relevant news delivery is ever-evolving. Founded by newspaper veterans, the Prophet delivers up-to-date information by writers and photographers who combined have 50-plus years of experience in the field and newsroom. Always free to readers, the Prophet is published on multiple platforms, and shared within the online community to more than 150,000 people. No paywalls and no paid subscriptions make news and feature stories immediately available with one click of a button or one swipe on a keypad.
​
All content copyright property of The Bandera Prophet