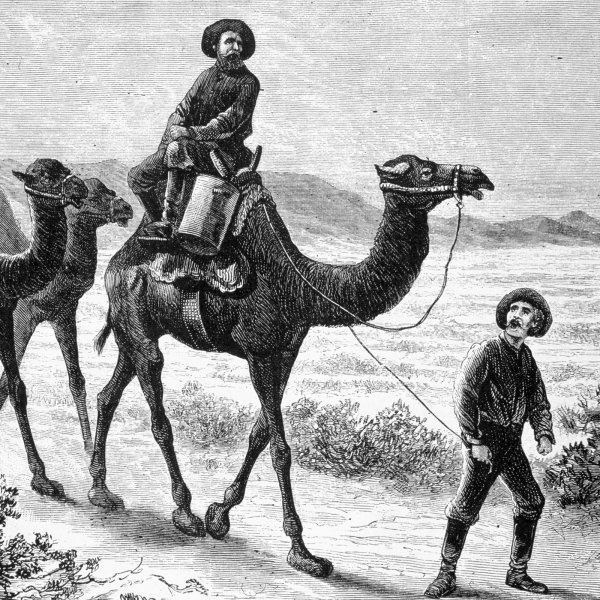 A drawing of the U.S. Military Camel Corps at Camp Verde, Texas, circa 1856. 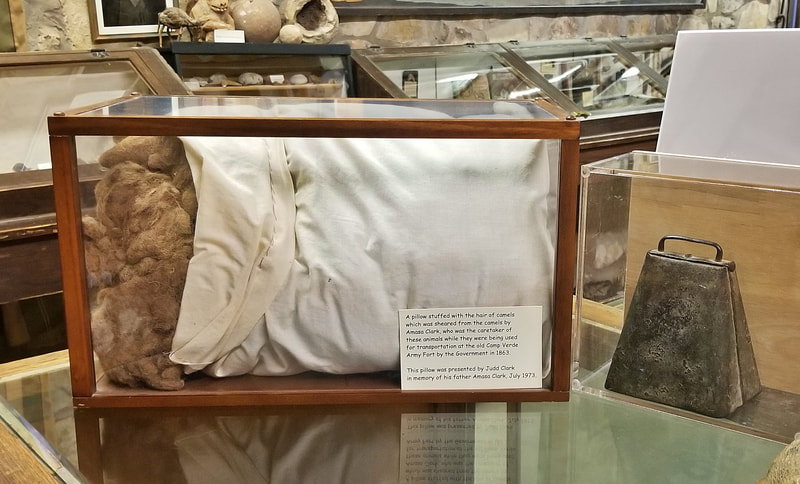 What does one do with a pile of camel hair, freshly sheered from an ornery creature that just arrived in the hills of Texas from some far away exotic country? If you’re Amasa Clark, an early settler of Bandera County, you make two pillows from the wooly fur. In 1855, Clark was hired by the Army to help care for the camels that were brought to nearby Camp Verde. But why were camels even at Camp Verde? The camels were part of an extraordinary military experiment.
Faced with moving troops across the deserts of the Southwest, Major Henry C. Wayne, submitted a report to the War Department recommending the use of camels to take the place of traditional pack animals. Then Secretary of War, Jefferson Davis, supported the idea and in 1855, appointed Major Wayne to head the expedition to acquire the camels and lead the newly formed U.S. Camel Military Corps. Wayne traveled to the Middle East to purchase the animals and, in 1856, landed at Indianola on the Texas coast with his cargo of 34 camels and five Arab and Turkish camel herders to train the soldiers. Wayne transported the animals on the first Texas Camel Drive, stopping at the Alamo and moving on to Camp Verde. Here, Wayne constructed a camel corral exactly like those found in Egypt and Turkey.
To ensure Secretary Davis of the usefulness of the camels, Wayne conducted a field test in which he sent a six-mule team and six camels back to San Antonio for a supply of oats. The mule teams took five days to make the return trip. The six camels made the trip in only two days, carrying twice the amount of oats. More camels were delivered to Camp Verde and civilian handlers, such as Amasa Clark, were hired to care for them. After completing a number of surveying expeditions for the Army, the camel experiment appeared to be a success, but the outbreak of the Civil War changed the course of military history.
In February of 1861, the Union Army had retreated and Confederate troops now occupied Camp Verde. While the Army had moved some camels to other posts, legend has it the rebel troops, who disliked the animals, set them free. For many years afterwards, it was said travelers could encounter a camel or two in the hills surrounding Camp Verde. While this may be a fantastical tale, one of the camel pillows made by Amasa Clark does exist, a last remaining remnant of camels on the Texas frontier. The pillow, made 160 years ago, sits today in a glass box in the Frontier Times Museum, a donation to the museum by Clark’s descendants. ​