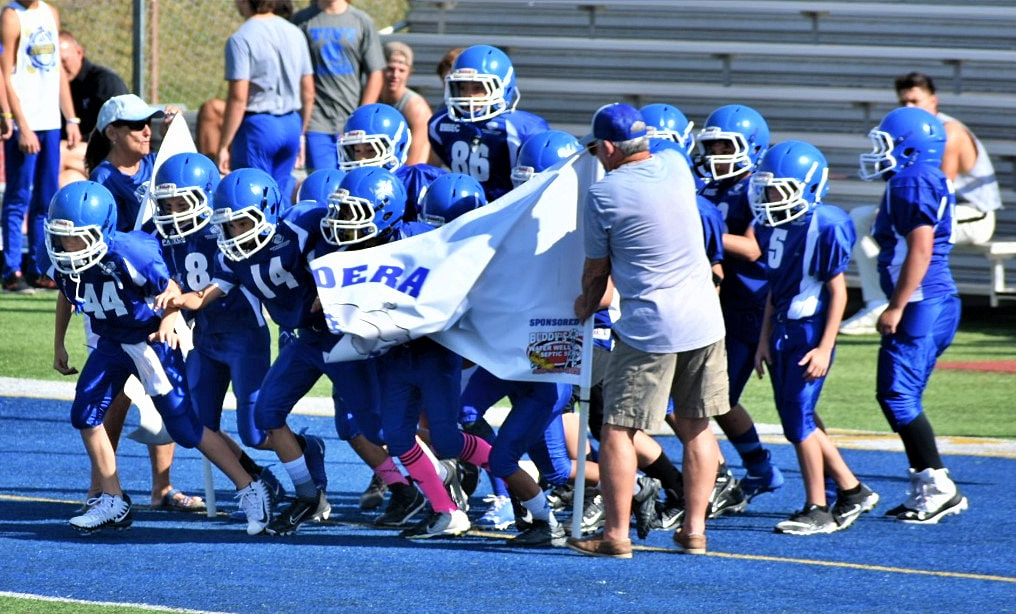 The Bandera Jr. Bulldogs take the field before their 22-0 victory over Ingram on Saturday. The win moves the Bulldogs to 2-1 on the season.

BHS
Tennis
The Bandera High School tennis team played in Ingram last week against the undefeated in district and defending state 4A champs, Fredericksburg, losing by a 10-0 count.
Bulldog coach, Ginger Frye, said she was happy with the effort and heart she saw from the team.
Bandera will face Wimberley on Thursday for their last  district match of the fall season.

Jr. Bulldog Football
The fifth and sixth grade Bandera Junior Bulldogs moved to 2-1 on the season with a dominating 22-0 win over Ingram Saturday morning in Kerrville.
Bandera's James Bower hit Damien Cadenas for a 30-yard completion to set up Mack Keller for the Bulldog's first points from 12 yards out. Breydan Gherman kicked the PAT (two points at this level) to make it 8-0.
Gherman would score later on a 40-yard keeper to make it 14-0 at the half.
Capping off the scoring for the game was a 50-yard scamper by Gherman on a reverse from Remington Galloway in the second half and Gherman's PAT would "seal the deal" at 22-0.
Defensively, coaches were quick to point out that the shutout was highlighted by the hardnosed play of Jackson Aragones and Riley Brodsky along with Benton and West Cloudt.
The Bandera Prophet is grounded on the premise that relevant news delivery is ever-evolving. Founded by newspaper veterans, the Prophet delivers up-to-date information by writers and photographers who combined have 50-plus years of experience in the field and newsroom. Completely free to readers, the Prophet is published on multiple platforms, and shared within the online community. No paywalls and no paid subscriptions
make news, sports, feature stories and more immediately available with one click of a button or one swipe on a keypad.
All content copyright property of The Bandera Prophet