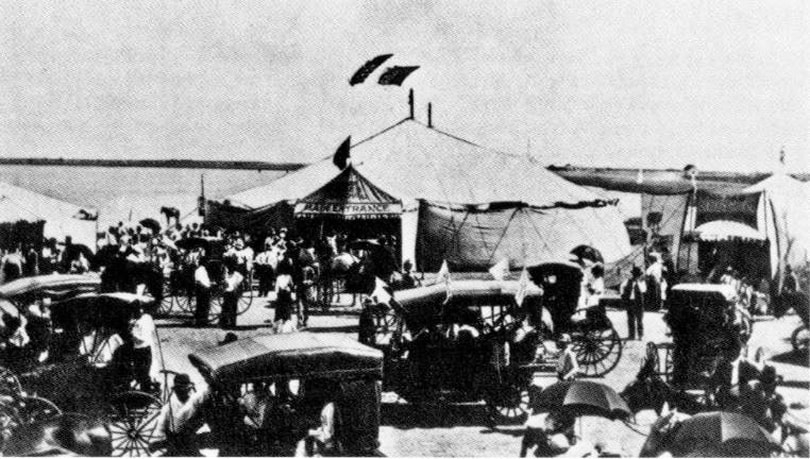 A Texas gal is the Circus Queen

Before there were Dancing with the Stars and America’s Got Talent, the circus was often the only show in town. Circuses offered city and country folk a window onto the world before television brought entertainment into our homes every night. Dominated by men such as P. T. Barnum and the Ringling Brothers, circuses moved from town to town in military precision. In Texas, one woman towered over all the men – Mollie Bailey.
The South’s foremost woman circus owner Mollie Bailey brought the circus to many small towns in West Texas where the residents never experienced the likes of elephants, tigers, lions and clowns. The Mollie Bailey Show came to town in horse-drawn wagons, bringing trapeze performers, acrobats, trained ponies and the aforementioned attractions. A week before their arrival, townsfolk would wake up to see their towns plastered with colorful posters heralding the imminent arrival of the Mollie Bailey Show. A colorful parade of painted wagons and marching animals were led into town by a brass band composed of the Bailey brothers.
Born in Alabama, Mollie Kirkland married Gus Bailey, the son of a circus owner, in 1852. They formed the Bailey Family Troupe and traveled throughout the southeast until the outbreak of the Civil War. Gus joined the Confederate Army and became a member of Hood’s Texas Brigade where he led the regimental band. Mollie joined the Brigade as a nurse but this didn’t keep her from her love of performing. She became a member of the Hood’s Minstrels, singing and dancing for the ragged, half-starved soldiers in camp. She even served as a Confederate spy on occasion.
After the war, they purchased a small circus and moved to Texas. Billed as a “Texas Show for Texas People,” the flags of the Union, the Confederacy and Texas flew above the three-pole tent. After Gus’ death in 1896, Mollie operated the show with great business acumen. In 1905, she purchased a Pullman car and the circus became a railroad circus. She was one of Texas’ great personalities, giving hundreds of performances on behalf of many charities, always admitting Union and Confederate veterans in for free, and personally greeting the guests as they streamed into her big top.
The circus wintered in Houston each year until Mollie passed away in 1917, bringing to a close a colorful chapter of circus history. Texas is steeped in the annals of circus lore and legend. One of the largest circus collection of posters and memorabilia was amassed by San Antonio businessman, Harry Hertzberg, who befriended many circus performers who wintered in Texas. His collection became the impetus for the Hertzberg Circus Museum in downtown San Antonio. After it closed in 2001, the collection was transferred to the Witte Museum in San Antonio where it is often displayed. Bandera County had its own circus. The H.B. Richards Circus wintered many years in Pipe Creek where circus ponies and the family rested and recuperated before going back on the road for a new year and new tour.
The Bandera Prophet is grounded on the premise that relevant news delivery is ever-evolving. Founded by newspaper veterans, the Prophet delivers up-to-date information by writers and photographers who combined have 50-plus years of experience in the field and newsroom. Always free to readers, the Prophet is published on multiple platforms, and shared within the online community to more than 150,000 people. No paywalls and no paid subscriptions make news and feature stories immediately available with one click of a button or one swipe on a keypad.
​
All content copyright property of The Bandera Prophet