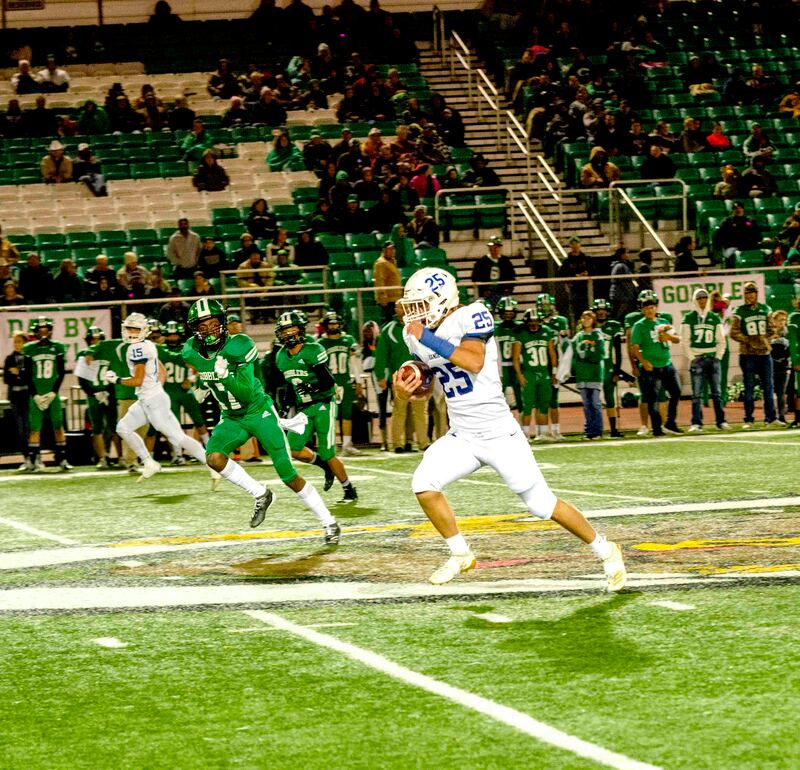 Bulldog TE, Mason Phair, was all alone on this 60 yard TD pass from Solomon MacNeil. 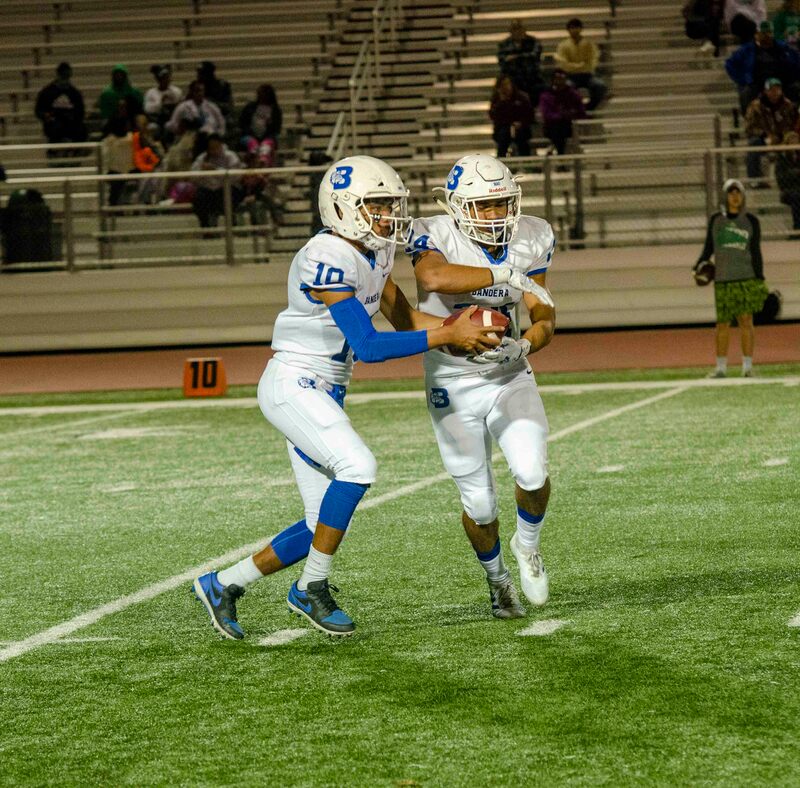 Solomon MacNeil (10) reads the defense and did not hand off to Tommy Cardenas (24) on this play. 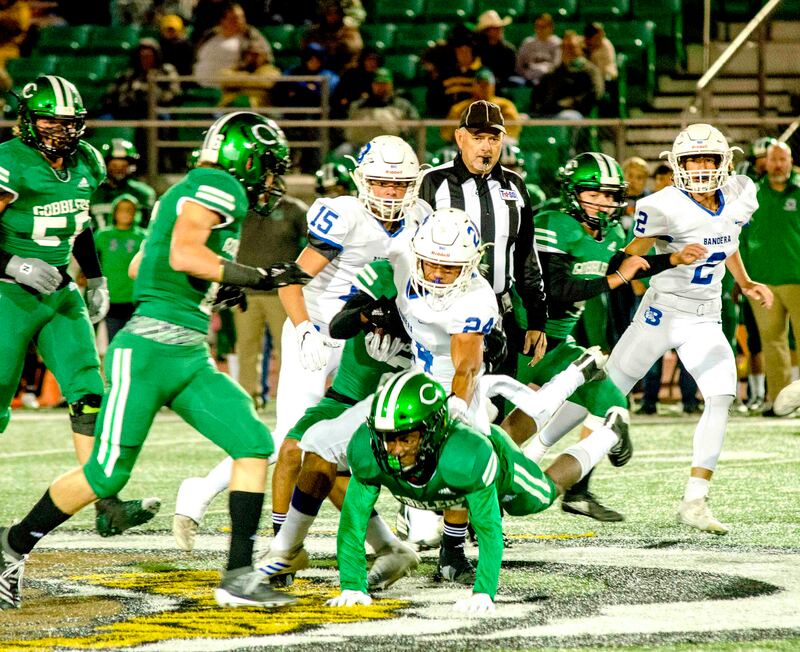 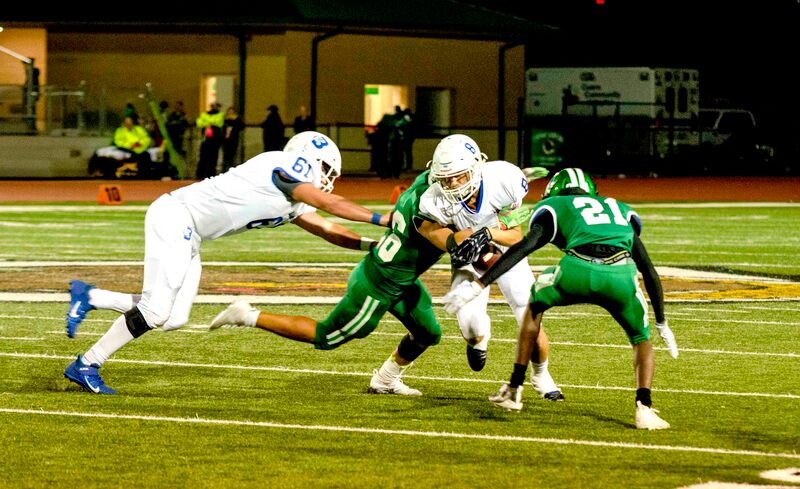 Bulldog P/WR Trace Decker gets hit by a Gobbler defender. 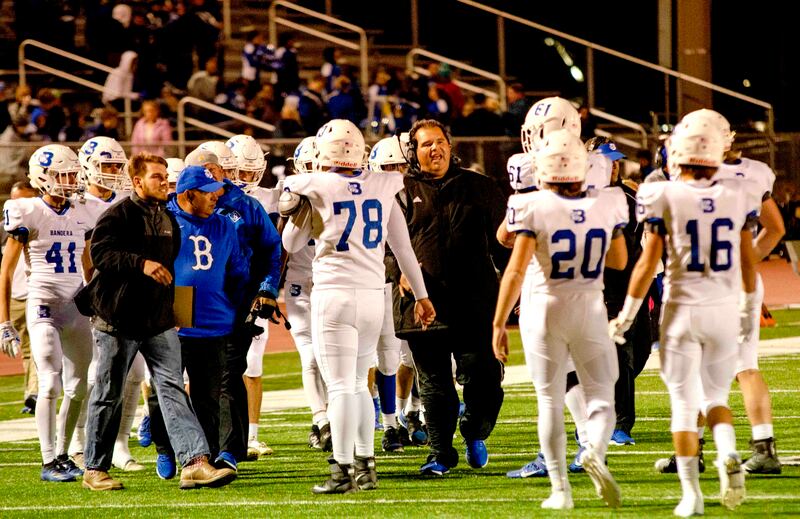 Defensive Co-Ordinator Manny Martinez rallies his troops late in the game during a time out. 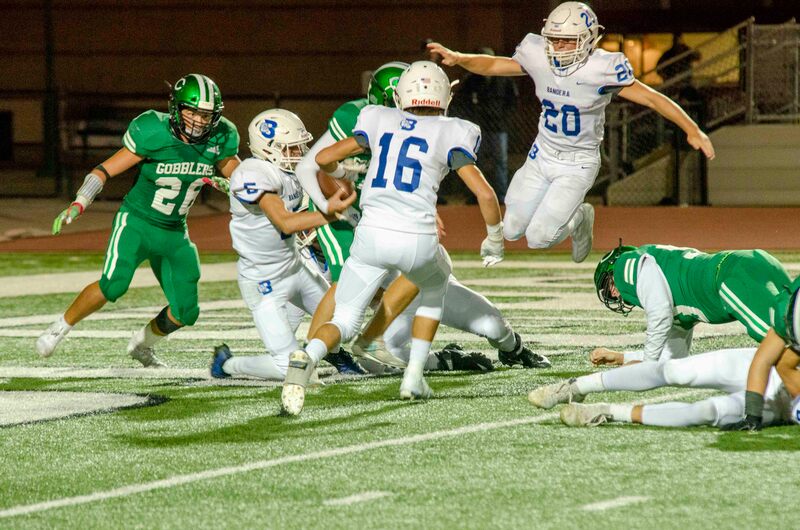 The Bulldog defense trapped Cuero's QB in the endzone for a safety in the fourth quarter, giving Bandera the lead, 16-15. 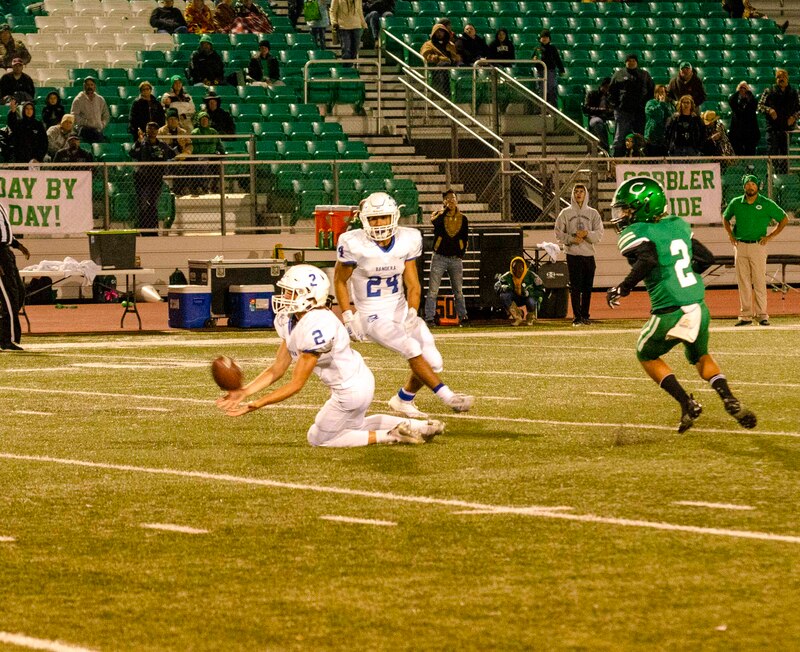 Gage Brown's interception killed Cueros last gasp effort to retake the lead in the last two minutes of the game. 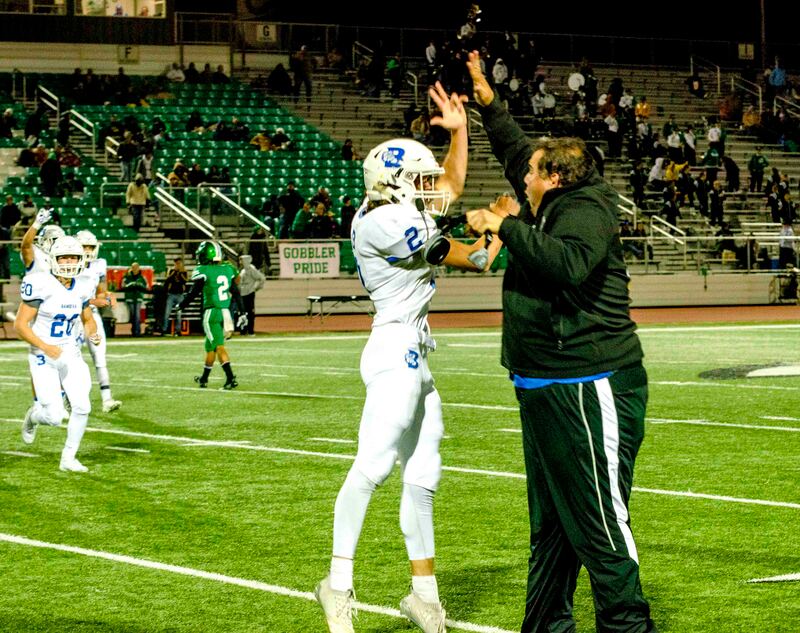 In what was deemed an upset by some and a great defensive battle by most in attendance, the Bandera Bulldogs defeated  defending state 4A-D2 champs, the Cuero Fighting Gobblers, on the road by a 16-15 tally Friday night.
Coming into the game, hardly anyone outside of  Bandera coaches, players, parents and faithful fans gave the Bulldogs a chance to steal a road win from the eight time state champions, if they were lucky.
Well, it wasnt luck, but hard-nosed defensive play throughout the game coupled with two timely plays late in the fourth quarter that sealed the win for Bandera.
Football weather got here just in time to start District 13-4A-D2 play. With tempratures in the high 50s and gusts of 30 mph, South Texas was ready for football.
Cuero opened the scoring on a 75 yard extended drive that ate up almost half of the first quarter.
A good PAT made it 7-0 with 6:18 left in the first.
Those windy conditions came into play as the ensuing kickoff only made it the Bandera 40, giving  the Bulldogs a short field to start.
That short field just made it less of a run after catch for Bulldog TE Mason Phair, as he gathered in a Solomon MacNeil pass and rumbled untouched into the endzone just 11 seconds after the Cuero score, taking the home crowd out of the game.
A Blaise Salazar PAT tied the game at 7-7 with 6:07 left in the first.
Bandera would take the lead before going into the half on a broken play by MacNeil on a 35-yard keeper and Salazar added another good PAT with 4:39 left in the half, making it 14-7.
After halftime adjustments on both sides, the second half would turn into a defensive struggle. Bandera's first possession would net -10 yards and forced the Bulldogs to punt away to the Cuero 47.
The Gobblers would score on a short rush to make it 14-13 with 4:37 left in the third.
Cuero lined up for the two point conversion in a modified swinging gate with three linemen in the middle, a back behind them and the rest of the team spread near both hashes and powered it right up the middle to take the lead, 15-14.
With the Bulldog offense struggling to get some momentum going and the defense handling Cuero,  there was a feeling that something needed to happen for Bandera to pull out a win.
That thing did happen, courtesy of the Bulldog kicking game and the Bandera defense.
With the Bulldogs looking at a fourth and 24 after a delay of game penalty, punter  Trace Decker punts near midfield, deep with the wind, and it takes a roll to be downed on the Cuero one yard line.
The "Wrecking Crew" steps up and swarms the Gobbler backfield, resulting in their second safety of the year, with just 7:58 left in the game, to make it 16-15, putting Bandera in the lead.
After the Bulldogs couldn't get a drive going after  Cuero's free kick, Decker was called on again to deliver and he sends another punt deep, this time to the Cuero two yard line.
The Gobblers weren’t done yet, mounting two more drives in the waning minutes of the fourth, but a Mason Musik fumble recovery on the first drive and a Gage Brown interception on the Cuero 32 on the second, sealed the win for the Bulldogs.
It was a defensive battle as Cuero held Bandera to a season low 207 offensive yards, 117 passing and 90 rushing while the Bulldog "Wrecking Crew" throttled the Gobblers to just 135 yards. Cuero made one completion in four attempts for 4 yards and racked up 131 yards on the ground in 42 attempts while gaining 10 first downs.
"That game was a fistfight, we knew how big a game this was going in. We had two weeks to prepare and all we wanted to do was compete," coach Joel Fontenot-Amadee said.
Looking toward this weeks game, the Wimberley Texans return 14 starters from last season and are currently 5-1 with their only loss to Austin Regents, another 5-1 squad, that is the state ranked number two team in TAPPS II.
The two mainstays of the Texans offense are senior QB, Cooper McCollum, who has completed 66 of 124 passes for 1195 yards and 15 TD's and 391 yards rushing in six games and sophomore RB, Moses Wray, who has 277 yards in five games.
Kickoff is scheduled for 7:30 p.m. Friday night, see you in Wimberley!