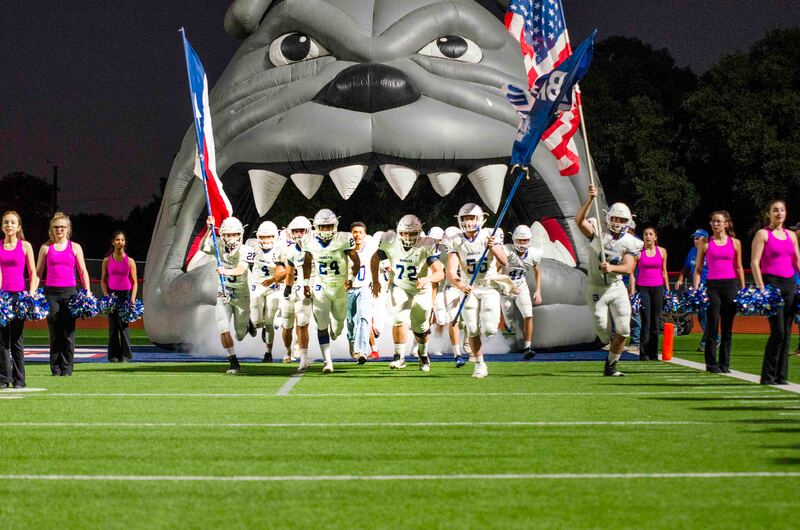 The Bulldogs take the field before the opening kickoff against Wimberley. 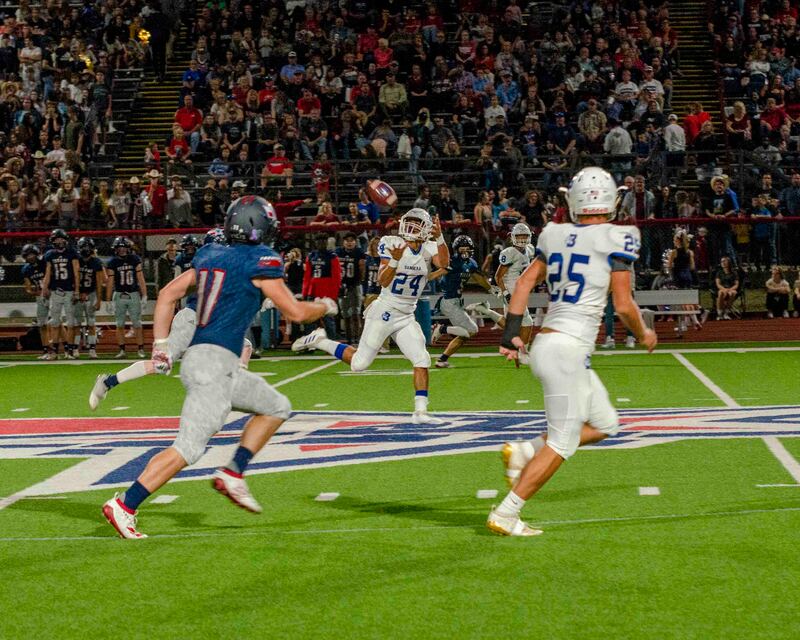 Tommy Cardenas hauls in a long pass from Gunnar Brown that helped set up a score for the Bulldogs a few downs later. 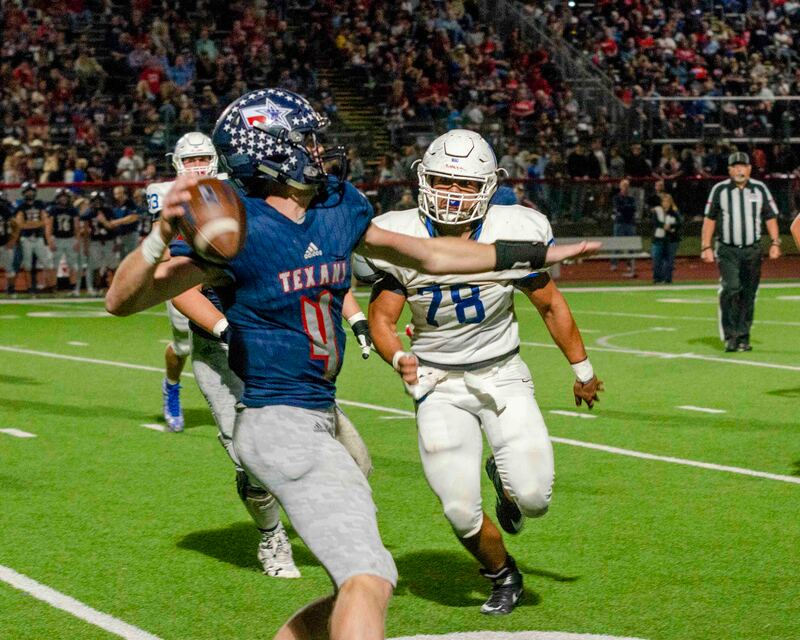 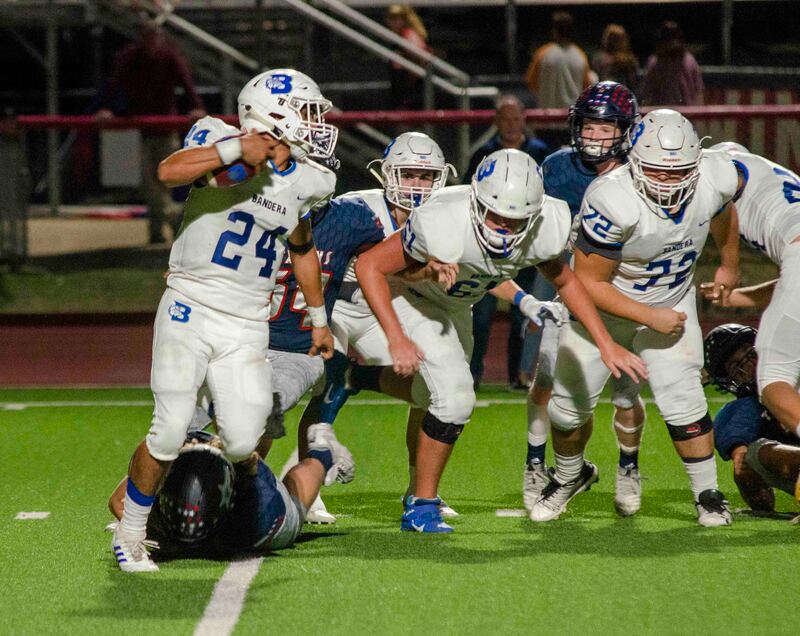 Tommy Cardenas had 221 yards rushing against the tough Texans defense, thanks to good blocking by teammates and individual effort. 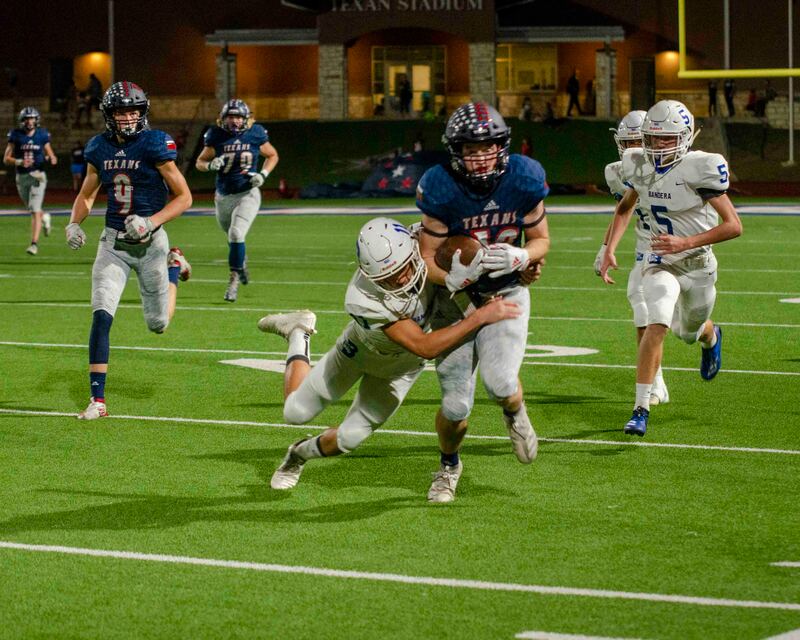 Gunnar Brown brings down a Texan back. 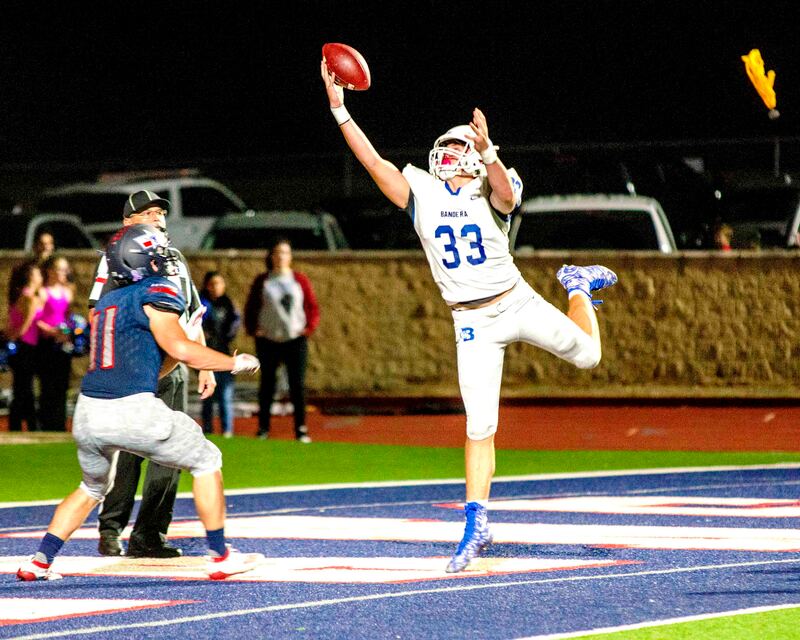 Liam DeMarchi almost had a touchdown reception on this play. 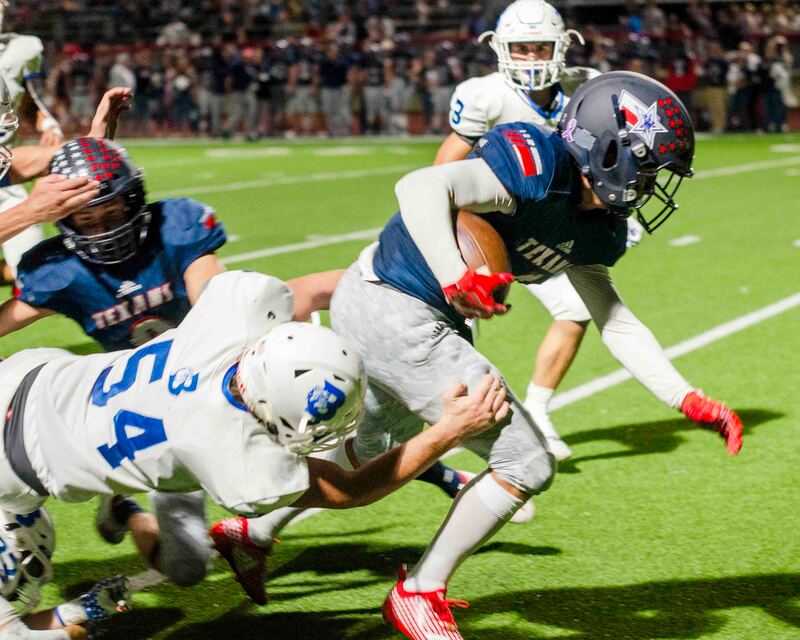 Mason Musick (54) makes a tackle on a Texan late in the game.

Bulldogs doubled up by Texans in first loss of season

Bandera's Bulldogs felt the sting of defeat for the first time this season with a 56-28 road game loss to the eighth ranked Wimberley Texans Friday night.
Finding themselves down 14 points in the first three minutes, the Bulldogs were forced to play catchup for the rest of the night.
Bandera got on the scoreboard on a four yard rush by Tommy Cardenas, his first of four on the night, and a Blaise Salazar PAT was good, but it was 28-7 in favor of the home team at the end of the first quarter.
The second quarter would be almost a mirror image of the first with Wimberley adding two more scores before Bandera could answer.
This time, it was a seven yard rush by Cardenas and a Salazar kick to make it 42-14 at the half.
In the third quarter, Cardenas and Salazar again added to Bandera's totals, twice.
Cardenas showed his speed, and with a little help from some good blocks, hustled downfield for a 59 yard score and Salazar added another PAT for Bandera's first score.
Cardenas would cross the goal line for the fourth time on a long rush and Salazar's good PAT would be the Bulldogs last points of the night, at that point making it, 49-28.
Wimberley would score once again in the fourth quarter to make it, 56-28.
"Looking back at Friday, Wimberley is a top ten team, one of the elite programs in the state.
We made a few mistakes early and got in a hole," coach Joel Fontenot-Amedee said.
Defensively, Bandera's halftime adjustments held Wimberley to 14 points in the second half, but the Texans had put the game out of reach early.
"I think the biggest thing I took from the game is we played them 14-14 in the second half. We executed like we needed to and played a great second half, thats a big deal.
I was so proud of the crowd that showed up to support the team and hearing all of the encouragement from them, the positives and their reactions," Amedee said.
Another plus was the way the Bulldogs had to shift their game plan after finding out starting QB, Solomon MacNeil was out for the game, and played with Gunner Brown or Cardenas behind center.
Both did well on short notice, Brown had 100 yards passing and 40 on the ground and Cardenas shredded the Wimberley defense for 221 yards on 19 carries and added two receptions for 55 yards.
"This thing we are doing here is a big process and this week was a learning step in that process. It was a big time deal and I think it will makes us better moving forward these next few weeks.
I am really proud of the kids, they played hard, never quit and we finished up strong," Amedee said.
Wimberley's success against Bandera was mostly in part to the play of Cooper McCollum, the Texans QB. McCollum, the best QB the Bulldogs have seen this season, went 16-20 for 364 yards and four touchdowns.
The Texans run game added 189 yards on 28 carries while punching the ball in for the Texans other four scores.
Looking towards this Friday's game, Llano is in the hunt for a playoff spot in District 13 4A-D2 with a 1-1 district record, coming off a 35-14 win over Cuero last week.
Bandera wont get a break this week on defense as Llano has 15 returners from last season and have the leading passer in the district in Braxton Vickers, who has 20 scoring strikes so far this season with just five interceptions, coming into Friday nights contest.
The 'Jackets have a good ground game as well with Donovan Arellano averaging 100 yards per game.
"They pass to run and are good up front.
Defensively, their linebackers are the strength of their defense," Amedee said.
The 'Dogs will be wearing pink socks, so feel free to join the team in their support of breast cancer awareness.
Kickoff against the Yellowjackets is set for 7:30 and will take place at Bulldog Stadium.
Box score
1   2   3   4   Final
Bandera         7   7   14 0     28
Wimberley   28 14   7  7     56
Bandera stats:
Passing_ Gunnar Brown, 6-15-100-0-0
Rushing_ T. Cardenas, 19-221, Gunnar Brown, 18-40, Brock Johnson, 3-15
Receiving_ Cardenas, 2-55, Tyler Moore, 1-2 0, Mason Phair, 1-17, Trace Decker, 1-8
Tackles_ No stats available
Assists_ No stats available


​
The Bandera Prophet is grounded on the premise that relevant news delivery is ever-evolving. Founded by newspaper veterans, the Prophet delivers up-to-date information by writers and photographers who combined have 50-plus years of experience in the field and newsroom. Always free to readers, the Prophet is published on multiple platforms, and shared within the online community to more than 150,000 people. No paywalls and no paid subscriptions make news and feature stories immediately available with one click of a button or one swipe on a keypad.
​
All content copyright property of The Bandera Prophet