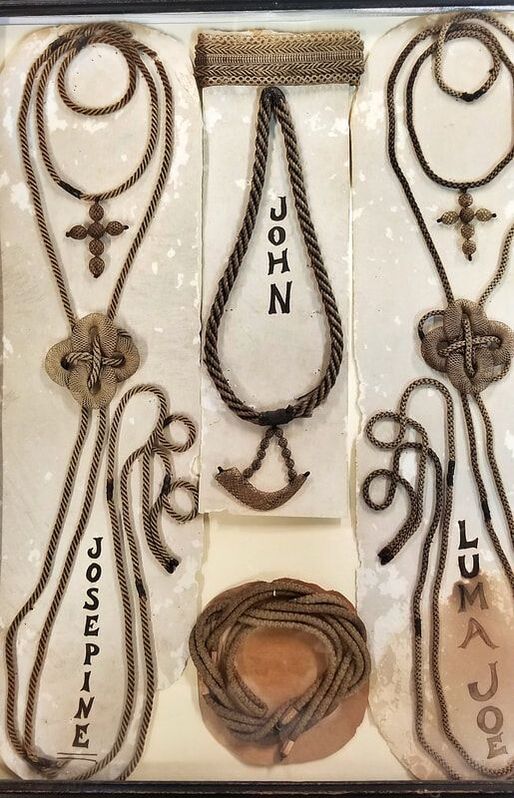 Did you know the Frontier Times Museum has jewelry made from human hair? During the Victorian era of 1800s, a popular pastime was weaving jewelry or objects out of human hair.
The objects could be simple, like a chain, or as elaborate as large wreaths made into a floral design and placed in a shadow box. Patterns for hair jewelry and crafts were sold in stores and featured in women’s magazines. Jewelry and objects made from the hair of friends and family still alive were sentimental keepsakes. Women would give each other locks of hair as a token of friendship much like children give each other friendship bracelets today. The objects made from the hair of a loved one who had died were a way to keep the memory of the person close to one’s heart.
This may seem a bit ghoulish today, but not so in Victorian times. The time period between the years 1837 and 1901 is referred to as the Victorian era after Queen Victoria of Britain who was quite the trend setter of her day. Many of our customs on how we mourn our loved ones who have passed began during this time. Victoria went into deep mourning when her beloved husband, Prince Albert, died at the young age of 42. She took to wearing black and slept next to his image until her own death in 1901. Her fashion choice to mark her grief gave rise to our tradition of wearing black to funerals.
Death was also a constant companion during this time. The average person’s lifespan was around 50 years of age and the mortality rate for children was especially high. Funerals were often held at home with the body displayed in the parlor for several days rather than at a funeral home. A particularly heartbreaking tradition was to take a photograph of a child after the child had died, especially if a photograph was not available of the child while they were alive. Photographs were also taken of family members in their mourning clothes, sometimes with a photograph of the deceased displayed next to them. Printed funeral cards with black borders with the name of the deceased and their birth and death dates were sent to relatives and friends to notify them of the death. These memorial cards became keepsakes and were often placed in scrapbooks. It was also during this time the tradition of sending flowers to be displayed with the coffin was started. The flowers became a way to show respect to the deceased.
The hairwork on display at the Frontier Times Museum is dated 1888. Each piece is displayed with the name of the person whose hair was used to create the intricately woven chains, crosses, flowers and even a miniature powder horn. It is unknown whether the loved ones were dead or alive, but what is known is the Victorian lady who created these extraordinary works of art was totally blind.
The Bandera Prophet is grounded on the premise that relevant news delivery is ever-evolving. Founded by newspaper veterans, the Prophet delivers up-to-date information by writers and photographers who combined have 50-plus years of experience in the field and newsroom. Completely free to readers, the Prophet is published on multiple platforms, and shared within the online community. No paywalls and no paid subscriptions
make news, sports, feature stories and more immediately available with one click of a button or one swipe on a keypad.
All content copyright property of The Bandera Prophet