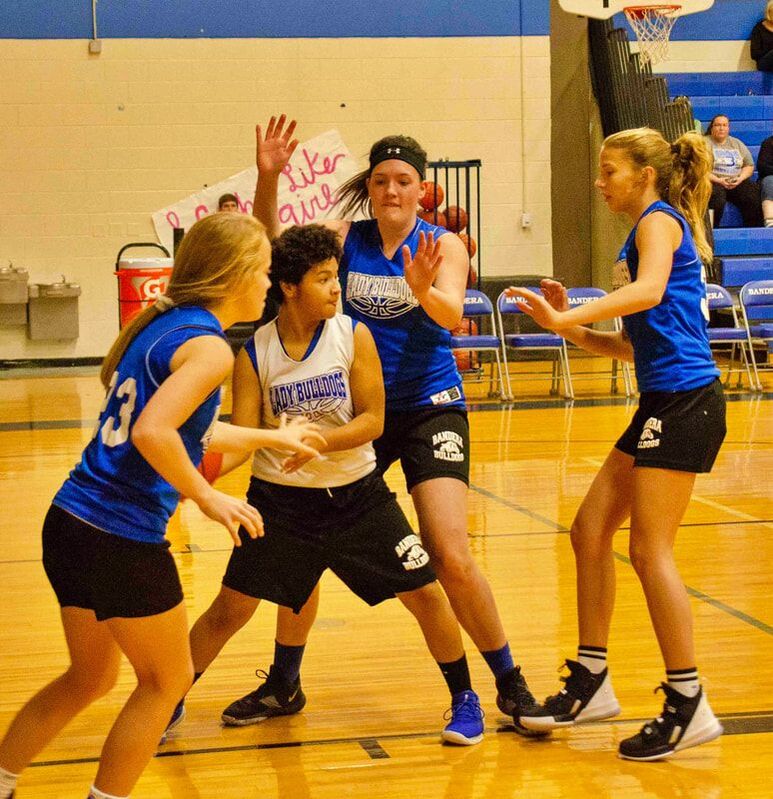 After two scrimmages and seemingly endless practices, Bandera's Lady Bulldogs travelled to Hondo to open their non-district basketball season on Friday.
Bandera took charge from the opening tipoff, charging out to a 13-5 lead at the end of the first quarter.
The second quarter saw the Lady Owls outscore the Lady Bulldogs by one, but both teams had single digit scoring to head to the lockerrooms with the score, 21-14, Bandera leading.
The Lady Bulldogs showed what they are capable of to open the second half, scoring a season high 18 points while holding Hondo to a season low points allowed 4, to extend their lead to 39-18.
The fouth quarter was almost a copy of the second quarter with Hondo outscoring Bandera, 8-6, to bring the game to a 45-26 final.
Brianna Stimmell put up 21 points with seven steals and Madison Leal had six boards to lead Bandera.
"We played exceptional defense and competed until the last buzzer," said first year varsity Head Coach, Kierstyn Dumont.

Box score
1   2   3   4   Final
Bandera  13  8  18  6     45
Hondo       5   9   4   8     26
Bandera stats_
Scoring: Stimmell, 21, A. Guajardo, 6, K. Salas, 6, L. MacNeil, 5, Leal, 4, S. Haby, 3
Rebounds: Leal, 6, Salas, 5, Stimmell, 4, Guajardo, 2 , Haby, 2,  MacNeil, 2
Assists: Guajado, 4, MacNeil, 3, Haby, 2, Salas, 2, Stimmell, 1
Steals: Stimmell, 7, Salas, 6, Haby, 2, Leal, 1
The JV Lady Bulldogs started their season with Hondo struggling to find their offensive mojo.
After giving up 13 points to the Lady Owls in the first quarter, Bandera picked it up defensively, giving up just 8 points in the final three stanzas while scoring 13 in the same time frame to just come up short at the buzzer, 21-16.
Savannah Cruz was the leading scorer for Bandera with 6 points, Lauren Benedict added 4 and Estella Calderon, Alyssa Isbell and Abby Danour each contributed 2 points.
Bandera will play again on Tuesday in their home opener against Pleasanton. The JV will tipoff at 4:30 p.m. with the varsity game to follow.
All three Lady Bulldog squads will be busy later in the week with the varsity playing in the Boerne Geneva tourney and the JV and freshman squads heading to the Hays Johnson tourney.
The Bandera Prophet is grounded on the premise that relevant news delivery is ever-evolving. Founded by newspaper veterans, the Prophet delivers up-to-date information by writers and photographers who combined have 50-plus years of experience in the field and newsroom. Always free to readers, the Prophet is published on multiple platforms, and shared within the online community to more than 150,000 people. No paywalls and no paid subscriptions make news and feature stories immediately available with one click of a button or one swipe on a keypad.
​
All content copyright property of The Bandera Prophet