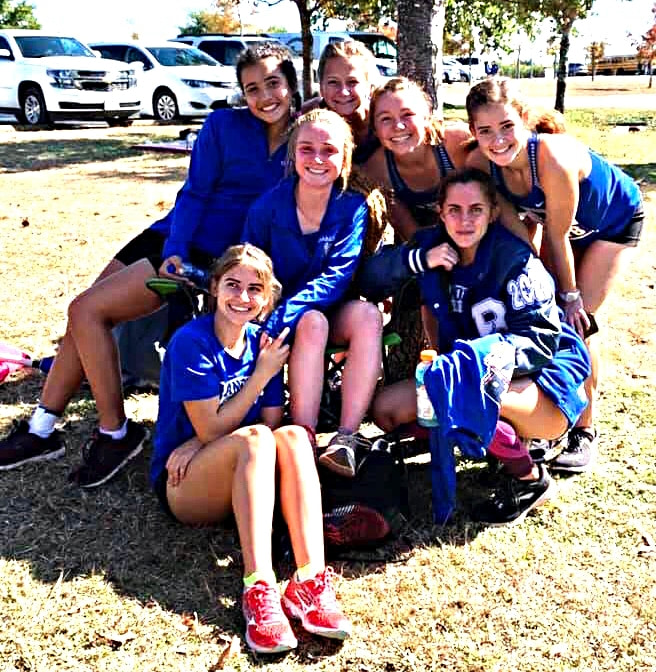 Saturday saw the Bandera Lady Bulldogs varsity cross-country team at the 2019 UIL State Cross Country Championships at Old Settlers Park in Round Rock.
With the top four teams from each of the four regions around the state, the competition was tough and when the dust had settled, Bandera was in sixth place.
Defending state champs, Canyon, won their second championship in a row, but silver medalists, Celina and bronze medalists, Hereford, were in the running as all three were knotted up at the front, with just 5 points separating the podium finishers.
This was Hereford's second year in a row as bronze medalists.
Argyle was some 30 odd points behind in fourth place and then Liberty Hill, Bandera and last year's second place finishers, Decatur, were fighting for fifth through seventh place another 30 points back.
Bandera missed placing fifth by 8 points while finishing just 3 points ahead of Decatur.
Bandera sophomores, Morgan Cole and Raelynn Butler, led the Lady Bulldogs with both finishing in the top 20.
Salado junior Jaci McGregor was the fastest runner of the day with a finishing time of 11:24.05 over the 3200 meter course. She finished fifth overall in last year's state meet.
"With there being 190 4A schools across the state of Texas, the Bandera Lady Bulldogs are the sixth best team in the entire state, that is a big deal!
After a long season, our year is now finally complete. I would like to thank our seniors for their leadership and dedication to the program and our younger runners for their continued commitment to our cross-country family.
I would like to thank all of our parents who sacrifice just as much, who help cheer on the girls, travel all over the state and for helping me with whatever is needed. I am very proud of all of the girls and look forward to see what they will accomplish in the future," Head Coach Brooke Ashcraft said.
Bandera will graduate three of their seven varsity runners, but the other four are all sophomores, and with the JV and incoming freshmen, Bandera cross- country will be in good shape for the next two years.
2019 UIL State  Cross Country Championships
Girls 4A 152 runners
Top 10 team results : 1, Canyon, 109, 2, Celina, 113, 3, Hereford 114, 4, Argyle, 146, 5 Liberty Hill, 169, 6, Bandera, 177, 7, Decatur, 180, 8, Alvarado, 198, 9, Huffman-Hargrave, 212, 10, Salado, 271

Bandera (team) results: 17, Morgan Cole, 12:16.31, 20, Raelynn Butler, 12:18.85, 41, Hannah Edwards, 12:46.61, 46, Elexis Pearson, 12:51.13, 53, Corrine
McMullan, 12:57.97, 68, Jordan Edwards, 13:15.29,
82, Caitlyn Thrasher, 13:39.34
The Bandera Prophet is grounded on the premise that relevant news delivery is ever-evolving. Founded by newspaper veterans, the Prophet delivers up-to-date information by writers and photographers who combined have 50-plus years of experience in the field and newsroom. Completely free to readers, the Prophet is published on multiple platforms, and shared within the online community. No paywalls and no paid subscriptions
make news, sports, feature stories and more immediately available with one click of a button or one swipe on a keypad.
All content copyright property of The Bandera Prophet