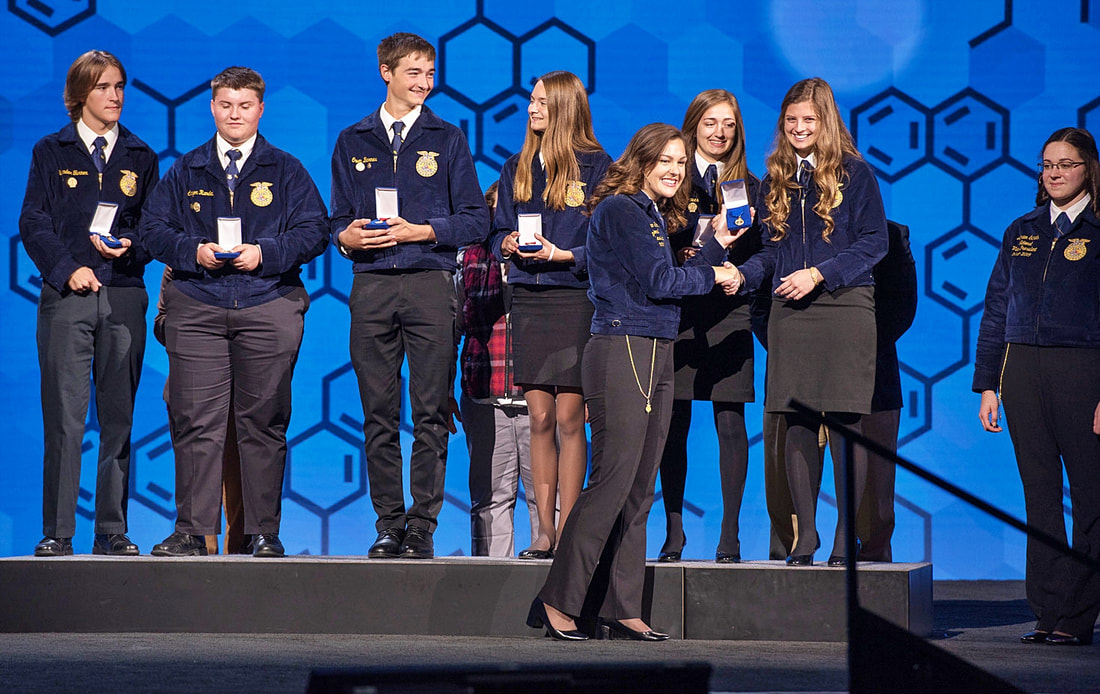 Chelsey Graves and Kate Guajardo, members of the Bandera FFA Chapter, were named national champions in the 2019 National FFA Agriscience Fair at the 92nd National FFA Convention & Expo in Indianapolis on Oct. 30.
Chelsey and Kate competed in the Power, Structural and Technical Systems division with their project entitled “Jumping the String: A Comparison Study of the Speed of Sound versus Arrow Flight Time.”
Stella Brown and Maci Morrison also competed and placed sixth in the in the Food Products and Processing Systems with their project entitled Methods of Tenderization: An Investigative Study of Cooking Time to Lethality.
A full list of results from this event can be found here: www.ffa.org/agrisciencefair.
The National FFA Agriscience Fair is a competition for FFA members who are interested in the science and technology of agriculture. It is held each year during the National FFA Convention & Expo and sponsored nationally by Cargill, John Deere and Syngenta.
FFA members compete in the national agriscience fair in one of six categories: The National FFA Organization provides leadership, personal growth and career success training through agricultural education to more than 700,000 student members who belong to one of the more than 8,600 local FFA chapters throughout the U.S., Puerto Rico and the U.S. Virgin Islands. The organization is also supported by more than eight million alumni and supporters throughout the U.S.

About National FFA Organization
The National FFA Organization is a national youth organization of more than 700,000 student members as part of 8,600 local FFA chapters in all 50 states, Puerto Rico and the U.S. Virgin Islands. The FFA mission is to make a positive difference in the lives of students by developing their potential for premier leadership, personal growth and career success through agricultural education. For more, visit the National FFA Organization online at FFA.org and on Facebook, Twitter and official news page of the National FFA Organization. ​
The Bandera Prophet is grounded on the premise that relevant news delivery is ever-evolving. Founded by newspaper veterans, the Prophet delivers up-to-date information by writers and photographers who combined have 50-plus years of experience in the field and newsroom. Completely free to readers, the Prophet is published on multiple platforms, and shared within the online community. No paywalls and no paid subscriptions
make news, sports, feature stories and more immediately available with one click of a button or one swipe on a keypad.
All content copyright property of The Bandera Prophet