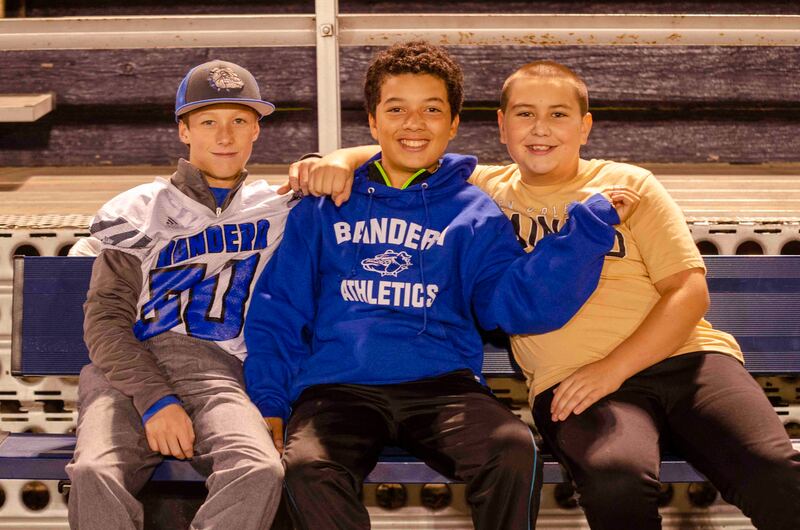 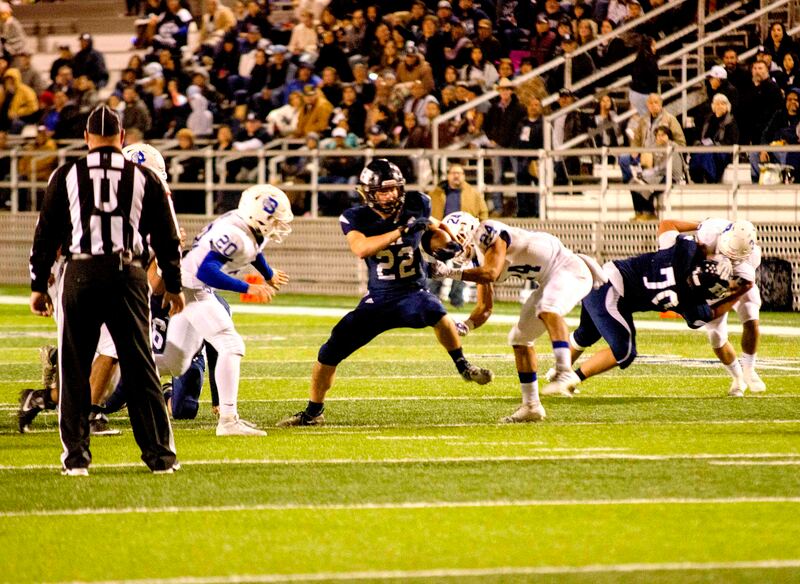 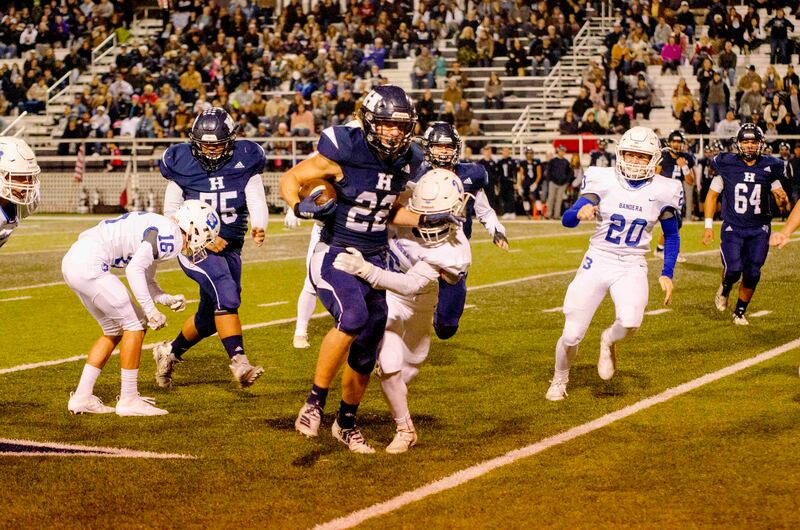 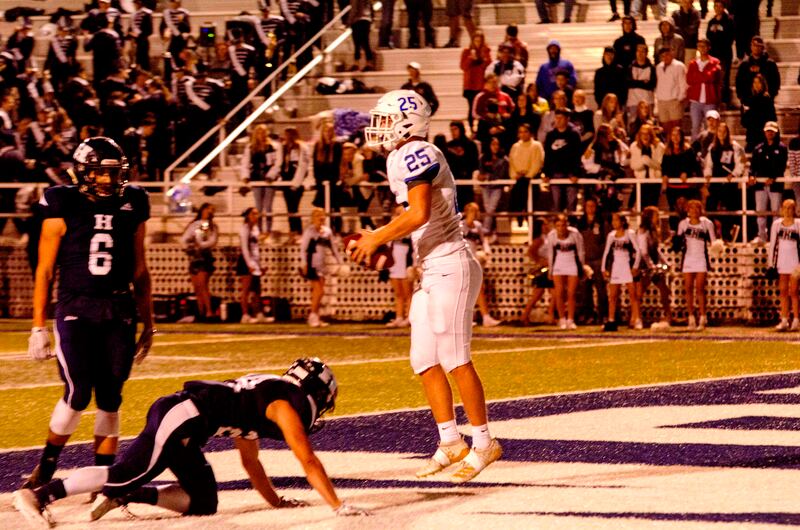 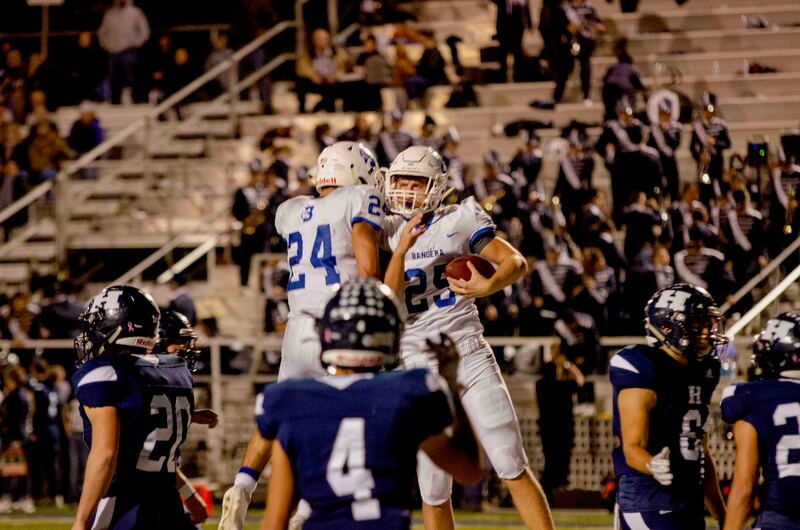 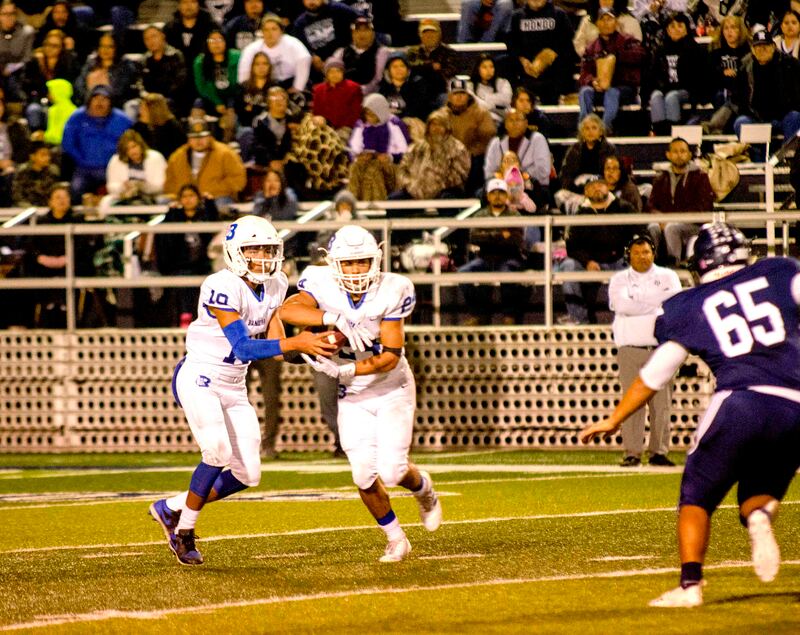 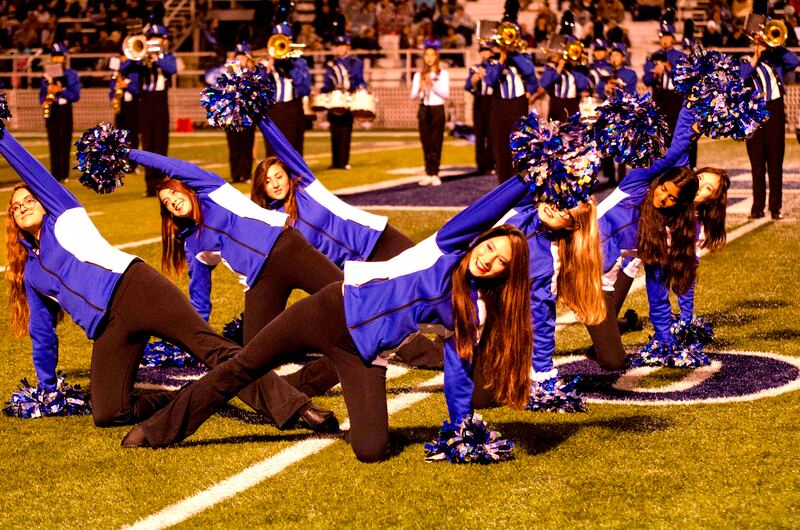 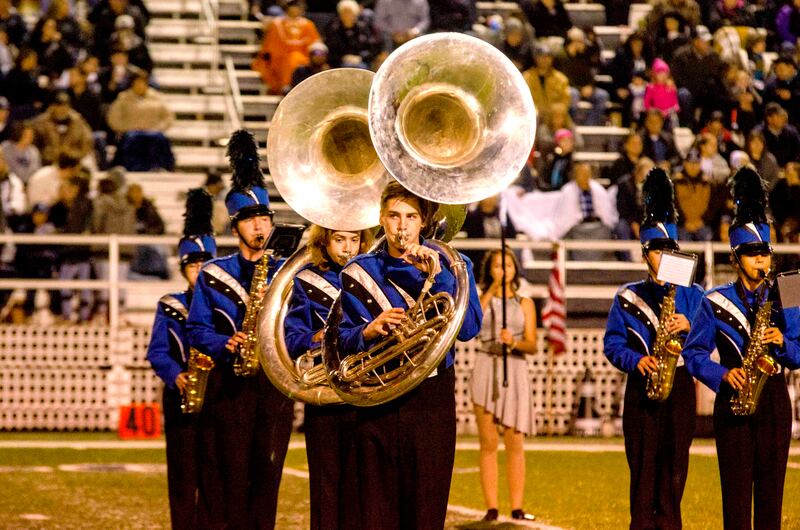 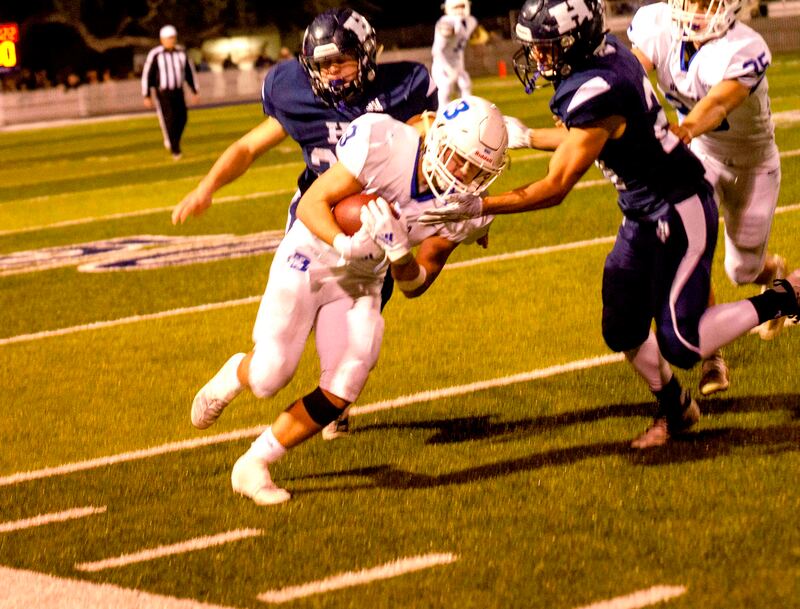 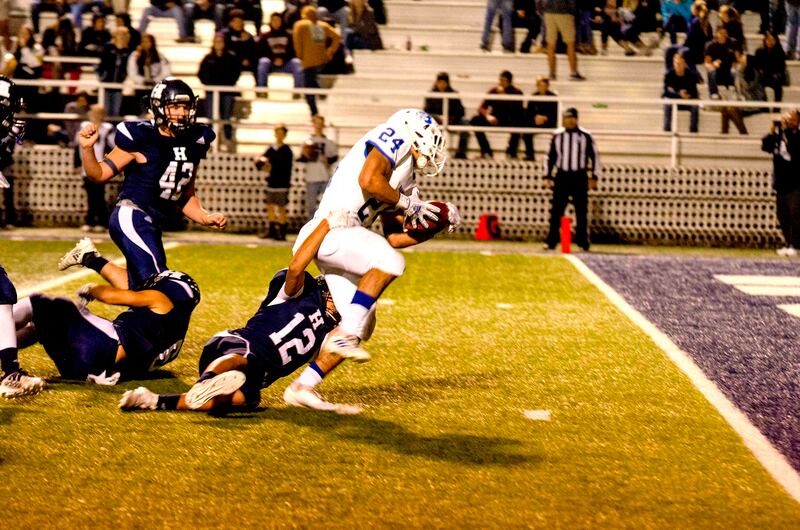 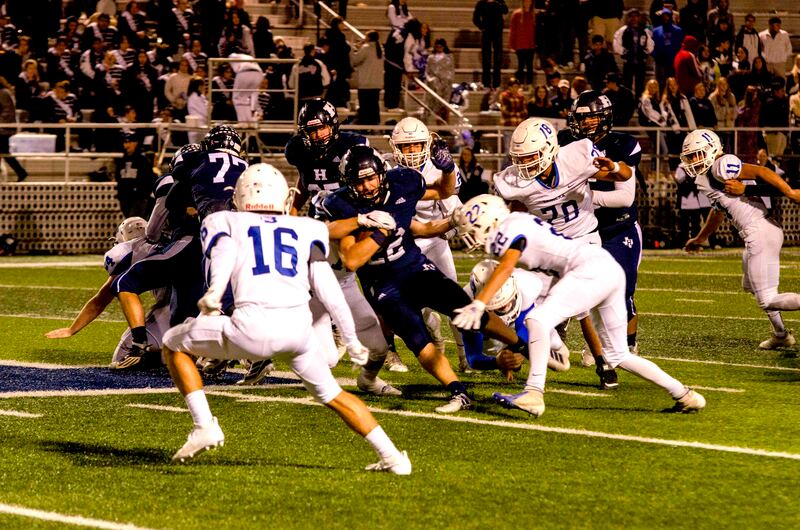 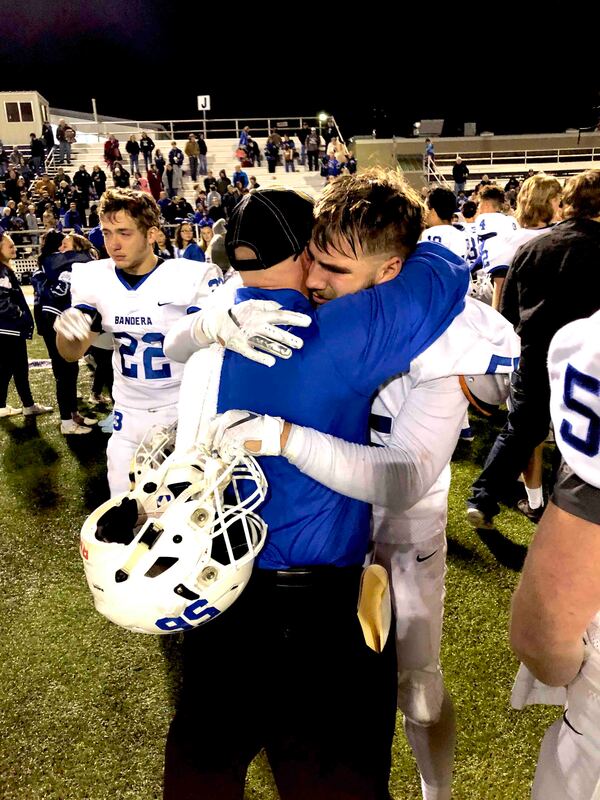 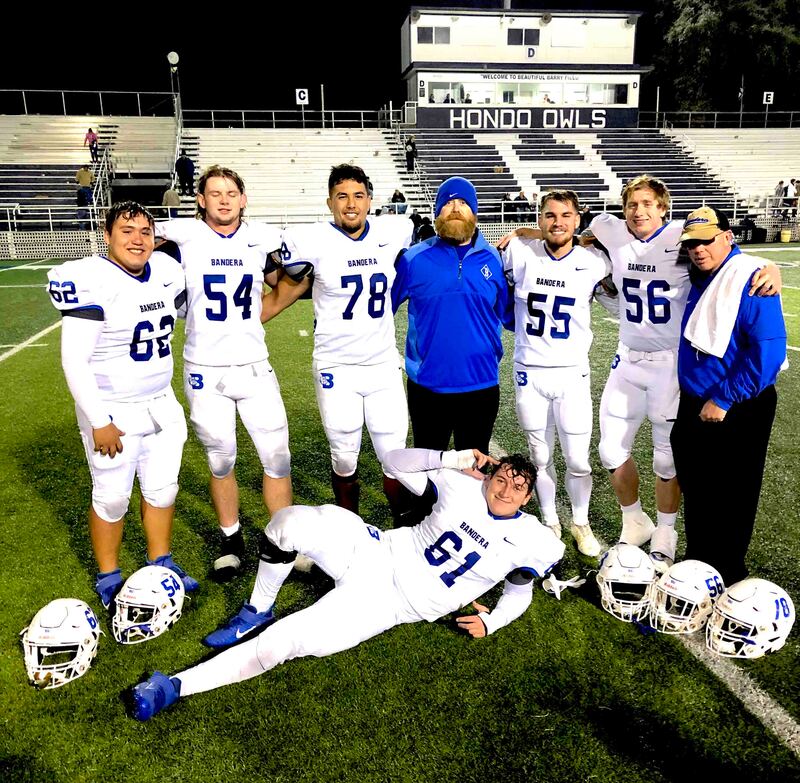 Bandera football's best season in a decade came to an end with a hard fought, 21-14, first round playoff loss to the Hondo Owls.
Coming into the game, Bandera had high hopes after a stunning 41-38 performance in a loss against Navarro the week before, but Hondo's game plan to keep the Bulldog offense off the field worked to the Owls advantage.
"We were still a little banged up from the week before, but Hondo did a great job limiting our possessions, had a good game plan and executed well," coach Joel Fontenot-Amedee said.
The Owls scored first on a 15 yard rush with 6:55 in the first quarter and a good PAT made it 7-0, and it would stay that way for the rest of the quarter.
Bandera would answer in the second, with 4:36 left. Starting on the Bandera 8-yard line, the Bulldogs drove 92 yards to score on a Solomon MacNeil to Mason Phair connection on a fourth and five. Blaise Salazar's kick tied the game at 7-7.
The second half started well for Bandera when  Tommy Cardenas, on a second and 10 from the Hondo 19, scored up the middle to give Bandera their first and only lead of the night. Salazar's kick made it 14-7 with 9:16 left in the third.
Hondo returned the favor and scored on a five yard rush with 1:55 left in the quarter. A good kick tied the game to set up the fourth quarter with the score tied at 14-14.
"I want to say this, our fans really showed up.
The place was crowded and we were fired up holding those four fingers up to start the fourth," Fontenot-Amedee said.
Well, it wasn’t to be the year for the Bulldogs as
the Owls would score in the fourth on a two yard rush and a good PAT made it a 21-14 final.
The Hondo game plan of limiting Bandera's time of possession worked as the Owls had 66 snaps to Bandera's 43. First downs where even at 13 and 12 respectively and total yardage was almost even.
Bandera's 206 yards were by 80 yards passing and 126 yards rushing, and Hondo had 41 yards passing and 182 rushing for a 223 yard total.
The Bulldogs exceeded all preseason expectations. No one else in the state expected Bandera to make the playoffs, they were picked to finish fifth in district, much less contend for a district championship.
That district championship was missed by three points, but the team gave Bandera something to cheer about on Friday nights and talk about the rest of the week.
"I really appreciate the way our fans and community bought into this season.
Our guys were in condition, mentally and physically, but over the course of the whole season, eventually things will start to break down. We had eight guys playing both ways, a few games we had some guys playing every snap, without major injuries.
Our seniors will be missed, but they have built a foundation for the direction we want this program to go. Moving into the off season, they have given the underclassmen a glimpse into what can happen when you buy into a program and put in the extra work. It will help other sports here as well," Fontenot-Amedee said.
The Bulldogs end with an 8-3 overall record and a 3-2 district record.
Thanks to the players, coaches, admin and everyone else involved for a season to remember, lets’ do it again next year!

Bandera vs. Hondo
Box score
1   2   3   4   Final
Bandera    0   7   7   0     14
Hondo       7   0   7   7     21
Bandera stats:
Passing_ S. MacNeil, 8-12-80-1-1
Rushing_ MacNeil,11-67, T. Cardenas,15-59
Receiving_ M. Phair, 2-32, B. Johnson, 3-25, Gunnar Brown, 3-23
Tackles_ Not available
Assists_ Not available
The Bandera Prophet is grounded on the premise that relevant news delivery is ever-evolving. Founded by newspaper veterans, the Prophet delivers up-to-date information by writers and photographers who combined have 50-plus years of experience in the field and newsroom. Always free to readers, the Prophet is published on multiple platforms, and shared within the online community to more than 150,000 people. No paywalls and no paid subscriptions make news and feature stories immediately available with one click of a button or one swipe on a keypad.
​
All content copyright property of The Bandera Prophet