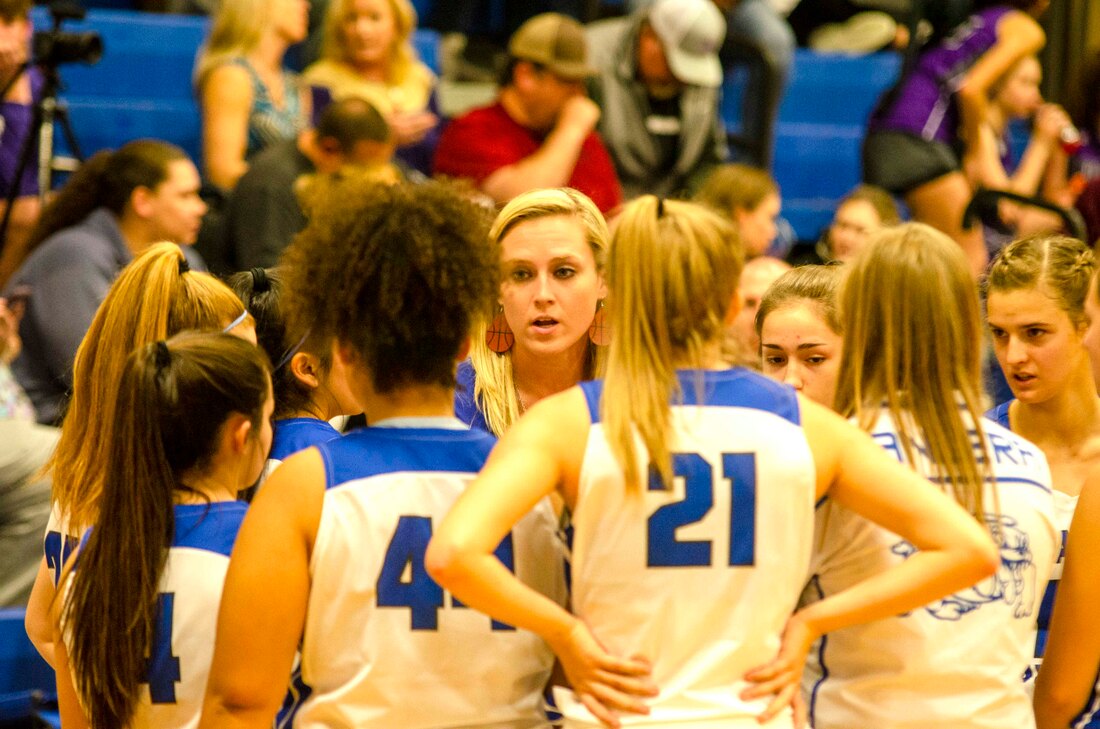 Coach Kierstyn Dumont and the Lady Bulldogs showed improvement in their game as they captured their first win in district play last week, a 45-40 road win over Canyon Lake.

Last week the Bandera Lady Bulldogs went on the road for Tuesday's and Friday's contests as the boys team's finally had a home game on both dates.
Tuesday the Lady Bulldogs headed to Llano for their second game in District 28-4A play.
Both teams played the first three quarters shot for shot with only two points separating them at the end of the first and third quarters, setting up the game breaker in the fourth.
Bandera hung tough but Llano's strength on the offensive boards allowed them additional chances on missed shots and along with good shooting percentage from the stripe, saw the home team take a 51-43 victory.
The Lady 'Dogs looked way better than in their first district game against Boerne, a 27 point loss, but shooting just 33 percent from the stripe, shows there are still points being left on the floor.
Bandera was led by Brianna Stimmell and Kristin Salas with 16 and 12 points respectively and Madison Leal and Elizabeth MacNeil grabbed 9 and 7 boards.
Bandera stats:
Scoring_ Stimmell,16, Salas,12, Anna Guajardo, 6, Leal, 5, Chelsey Graves, 2, MacNeil, 2
Assists_ Guajardo, 4, Salas, 4, Stimmell, 4, Graves, 3, Leal, 1
Rebounds_ Leal, 9, MacNeil, 7, Graves, 6, Guajardo, 6, Stimmell, 6, Salas 2
Bandera headed to Canyon Lake for game three of district and showed more signs of improvement and were pleased with the result.
Bandera started off with a good first quarter, led by Stimmell's seven points.
"We played exceptional defense, causing multiple turnovers by Canyon Lake. After ending up with a black eye in the first couple of minutes of the game, Graves got hot and led the team during the second quarter with eight points," coach Kierstyn Dumont said.
Bandera took a nine point lead in to the locker rooms at the half, and came out in the third continuing to play strong "D" and feeding Graves, who added another five points to her totals.
Stimmell took over from Graves in the Lady Bulldog's 16 point fourth quarter, scoring nine with MacNeil adding four to go along with Grave's two and Summer Haby's free throw to give Bandera a well-deserved, 45-40 win.
Bandera moves to 1-2 in district with the win and Wimberley and Fredericksburg coming up to finish the first round of district play.
Bandera stats:
Scoring_ Stimmell, 16, Graves, 13, Leal, 7. MacNeil, 4,Guajardo, 3, Haby, 2
Assists_ Guajardo, 3, Stimmell, 3, Graves, 2, Haby, 2, Leal, 1
Rebounds_ Graves, 7, Leal, 7, Stimmell, 4, Guajardo, 2, MacNeil,