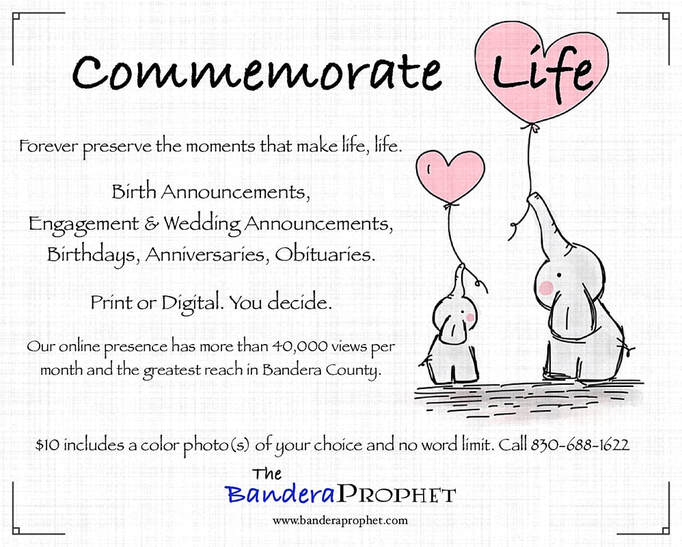 Bandera's Lady Bulldogs played host to the Wimberley Lady Texans last Tuesday and the game was not what anyone was expecting.
Bandera surged to a 20-9 first quarter advantage, thanks to the steady improving offense and some Wimberley miscues.
The Lady Texans weren't going down without a fight though and outscored Bandera by four points in the second to get within seven points at the half, 36-29.
Not helping matters any, Bandera's point guard and floor general, Brianna Stimmell, suffered a knee injury which forced some Lady Bulldog's into unfamiliar roles in the second half.
Wimberley got into foul trouble early in the third, sending the Lady Bulldogs to the line numerous times, but the Lady Texans continued to fight their way back into contention.
Bandera was up by a 47-43 tally to start the fourth and Kristin Salas stepped up to fulfill the role that was left open by Stimmell's departure.  Salas took the rock to the basket and kept getting fouled, bring rewarded with 12 shots from the stripe.
Just when it looked like Bandera was going to outlast Wimberley, the Lady Texans hit their only three pointer of the night with six seconds left to tie the game at 59-59, sending the game into overtime.
"We fought tooth and nail in the first overtime, executing time after time on both ends of the floor even though we had multiple people foul out. Every member of the team team stepped and fought the whole time," coach Kierstn Dumont said.
Liz MacNeil, Avery Ouellette and Salas combined to score six points in the first OT to match Wimberley scoring and send it to another OT period at 65-65.
The second OT saw the Lady Bulldogs fight a good fight, but Wimberley scored five and held Bandera scoreless to escape with a 70-65 win.
Box score
1    2   3   4   OT1  OT2  Final
Bandera       20 16 11 12   6       0        65
Wimberley    9  20 14 16   6       5        70
Bandera stats_
Scoring: Salas, 25, Stimmell, 11, Madison Leal, 9, Chesley Graves, 5, Anna Guajardo, 5, Ouelette, 4, Hannah Edwards, 3, MacNeil, 3,
Rebounds: Salas, 11, Leal, 8, Guajardo, 5, Graves, 4, MacNeil, 4, Summer Haby, 2, Oulette, 2, Edwards, 1, Stimmell, 1
Assists: Salas, 5, Leal, 3, Edwards, 2, Haby, 2, MacNeil, 2, Stimmell, 2, Graves, 1, Guajardo, 1
Looking to rebound from the disappointing double-overtime loss on Tuesday, the Lady Bulldogs headed to Fredericksburg to take on the 17th ranked Lady Billies in the final game of the first round of district.
Bandera, looking to get comfortable with their new look with the loss of Stimmell on Tuesday, saw Salas take over the role of point guard and  playing the entire game, scoring nine points to lead Bandera. Haby stepped up as well, grabbing 12 boards on the night for the Lady Bulldogs.
Fredericksburg, who seemingly has a height advantage over all the opposing teams in district every year, had a good night on the boards, limiting any second and third chances for Bandera while their offense kept up a steady barrage.
Fredericksburg extended their lead in all four  quarters to take an 80-33 victory and stay undefeated in District 28-4A play.
At the conclusion of the first round of district, Fred is at 5-0, Boerne trails at 4-1, Wimberley is third at 3-2, with Canyon Lake, Llano and Bandera fighting for the four spot to advance to the playoffs with five games left in district.
Bandera hosted Llano last night, which was Middle School Night. The stats and more will be reported in the Prophet as soon as they are made available.