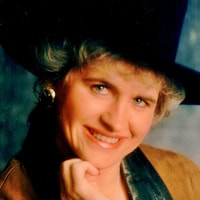 Cindy Lynn Thienpont Stein, of Lakehills, passed away in San Antonio, Saturday evening, Feb. 1, 2020 at the age of 58 years, just days before her 59th birthday. She was born Feb. 10, 1961 in San Antonio, one of five children born to Alidor C. Thienpont and Evelyn Sadie Stolte Thienpont.
Cindy graduated from John Marshall High School in 1979 and attended Alamo Community College. She worked as a real estate agent with Hummingbird Realty. She also helped her husband, James, with his automotive shop.
On Sept. 2, 1978, she married James L. Stein. They just celebrated 41 years of marriage this past September. Their marriage was blessed with one son, Jason.
Survivors include her husband, James Stein of Lakehills; son, Jason Stein of San Antonio; mother, Evelyn Stolte Thienpont of San Antonio; siblings, Donna Smith (Steve) of Yantis, Alidor D. Thienpont of Hondo, Cheryl Thienpont of San Antonio and Carol Thienpont of San Antonio; sister-in-law, Carol Haby (Thomas); brother-in-law, Gary Stein (Donna) as well as numerous nieces, nephews and other relatives. She leaves behind her chocolate Lab, Cocoa Lynn Stein.
She was preceded in death by her father, Alidor C. Thienpont; grandmother, Margaret Thienpont; parents-in-law, Alton and Theresa Stein and sister-in-law, TracAn Thienpont.
Visitation will be Thursday, Feb. 6, starting at 5 p.m. at Tondre-Guinn Funeral Home, with the Holy Rosary recited at 7 p.m. Mass of the Resurrection will be Friday, Feb. 7, at 10 a.m. at St. Louis Catholic Church. Interment will follow at St. Louis Catholic Cemetery in Castroville.
Memorials may be made in Cindy’s memory to the American Cancer Society or the charity of your choice.
Arrangements by Tondre-Guinn Funeral Home. Visit www.tondre-guinn.com.