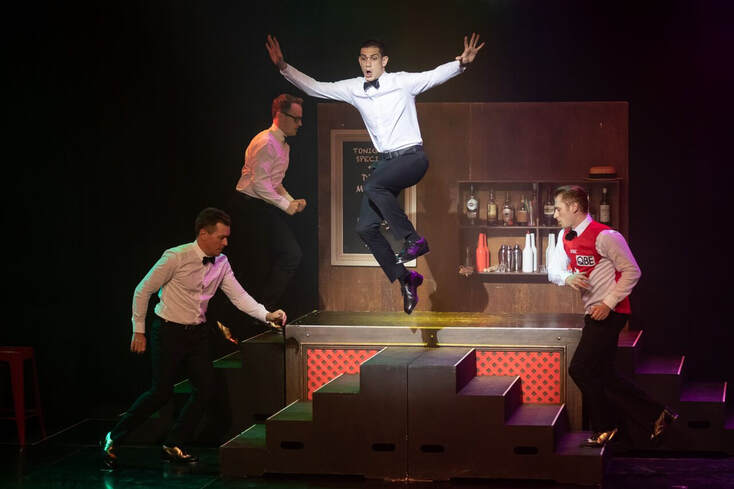 The Rat Pack of old…the Tap Pack of new

In 2013, three Aussies who had been friends for years were sitting in a bar where the idea to infuse the Rat Pack and Tap Dance ended up being written down on a napkin. The idea “leapt” off the napkin, driven by passion and hard work, and started to morph itself into a show that was full of heart, energy and pizzazz. This trio: Jesse Rasmussen, Jordan Pollard and Thomas J. Egan, will be in Boerne, joined by Tom Struik and Sean Sinclair, for some of the fastest footwork on both sides of the equator.
“Come Fly with Me” (Frank Sinatra) to this Boerne Performing Arts event to enjoy such hits from this era including “Lady is a Tramp,” “Night and Day,” and “Me and My Shadow.” The Tap Pack dazzles on stage, dressed in slick suits and equipped with sharp wit, as they present a modern twist on these classics. With credits on stage, film and television and with over 20 musical theatre productions between them, The Tap Pack is pure entertainment.
And while they are in town, these five entertainers and their 4-piece band will perform a special student matinee show as part of the Boerne Performing Arts FOR KIDS programs. One thousand Boerne ISD third-grade students will experience this live stage production thanks to the generosity of H-E-B Tournament of Champions Charitable Foundation, Cordillera Ranch, Frost Bank, and the City of Boerne. This FOR KIDS program will bring the total number of students to experience a Boerne Performing Arts’ artist to 27,000 students since their inception in 2012.
So, “Straighten Up and Fly Right” to Boerne Champion Auditorium on Tuesday, March 17, at 7:30 p.m., for a two-hour show that might require you to soak your feet following the performance. For a sneak preview of The Tap Pack, visit www.boerneperformingarts.com, where you can also use their online service for purchasing tickets for this and all Boerne Performing Arts events. Tickets ($20-$60; includes all ticketing fees) are also available at the Greater Boerne Chamber of Commerce; online at www.BoernePerformingArts.com; and phone requests may be made at 830-331-9079.
The Bandera Prophet is grounded on the premise that relevant news delivery is ever-evolving. Founded by newspaper veterans, the Prophet delivers up-to-date information by writers and photographers who combined have 50-plus years of experience in the field and newsroom. Always free to readers, the Prophet is published on multiple platforms, and shared within the online community to more than 150,000 people. No paywalls and no paid subscriptions make news and feature stories immediately available with one click of a button or one swipe on a keypad.
​
All content copyright property of The Bandera Prophet