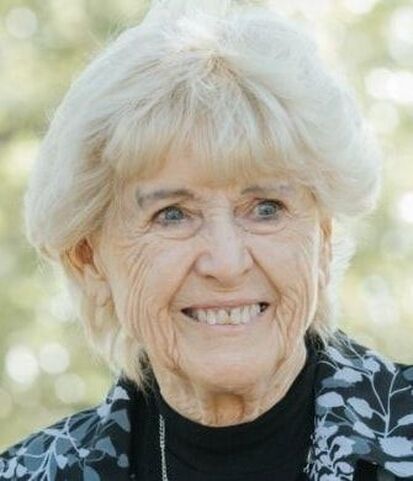 La Nelle Kirk, 89, of Medina, passed away on March 6, 2020, after a short stay in a local nursing facility. She was born in Medina on Feb. 1, 1931, to Lee and Inez (Miller) Neal.
She graduated Medina High School a year early, and for a brief time, worked as a photography model for Collins of Texas. She graduated business college in San Antonio, which led to a long and successful career as a bookkeeper for several firms, including a large San Antonio import/export company, and radio station KRNH “The Ranch” in Kerrville. Later, she served for many years as bookkeeper for her younger cousin at his Bandera insurance agency. While there, she was fond of telling customers that she had often changed her boss’s diapers. Earlier, she was leading lady in an amateur-produced western movie filmed at the Circle R Ranch in Medina.
While living in San Antonio, she met U.S. Air Force SSGT Lawrence “Larry” Kirk, who was stationed at Randolph AFB. After a three-year courtship, the two were wed on June 1, 1979. The couple moved to Medina in 1982.
La Nelle was preceded in death by her step-father and mother Floyd and Inez Mayfield, of Medina; brother Jerry Mayfield and wife Jean, of Fredericksburg; and brother Butch Neal of Arkansas.
“DohDoh,” as her grand- and great-grandchildren called her, is survived by Larry, her husband of 41 years; son Gary Stokes and wife Kirk of China Spring; daughter Alana Lay and husband John of Florida; son Lawrence Glenn Kirk, III of Arkansas; and by brother Allen Neal, of Harper. Surviving grandchildren include Maya Johnson, Adam Lay, Holly Vinson and husband Brian, Colin Stokes and wife Lyndy, Shawnee Faye Hunter, Jericho Hunter, Annie Stokes and Elijah Schmidt. Great-grandchildren are Jrey Johnson, Josiah Vinson, Avery Vinson, Corlee Stokes and Wix Stokes.
A celebration of La Nelle’s life will be held Saturday, March 14, at 11 a.m. at First Baptist Church of Medina. Serving as honorary pallbearers will be Brian Vinson, Glenn Kirk, Roddy Mayfield, Colin Stokes, Scott MacNaughton and Jrey Johnson.
Memorials may be made in La Nelle’s name to First Baptist Church of Medina. The family invites you to send condolences via www.grimesfuneralchapels.com by selecting the “Send Condolences” link.
The Bandera Prophet is grounded on the premise that relevant news delivery is ever-evolving. Founded by newspaper veterans, the Prophet delivers up-to-date information by writers and photographers who combined have 50-plus years of experience in the field and newsroom. Always free to readers, the Prophet is published on multiple platforms, and shared within the online community to more than 150,000 people. No paywalls and no paid subscriptions make news and feature stories immediately available with one click of a button or one swipe on a keypad.
​
All content copyright property of The Bandera Prophet