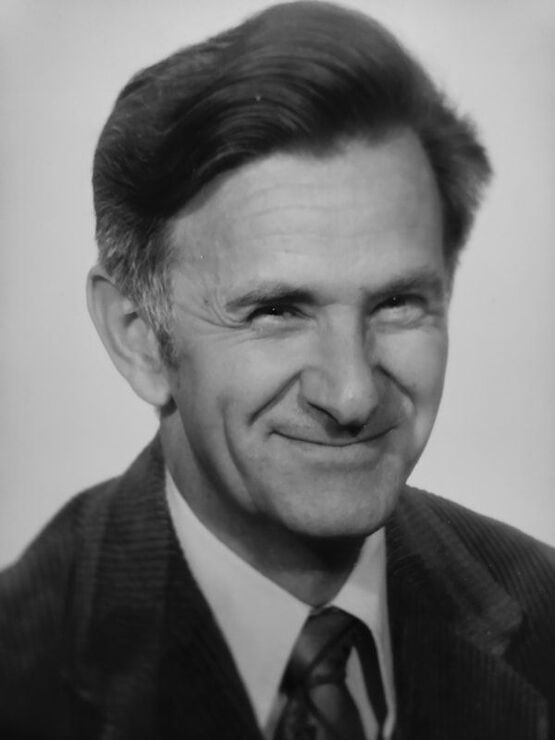 Kenneth W. Goben, “Ken,” was born Oct. 6, 1931, and passed away on Wednesday, March 18, 2020, at the age of 88.
Ken is preceded in death by his parents George and Elsie Goben of Lucas, Iowa; and his sister Lucy Goben Chandler of Chariton, Iowa. He is survived by his wife of 63 years, Patricia Turner Goben of Pipe Creek; his brother Bob Goben, of Lucas, Iowa; his son Michael K. Goben and wife Pamela, of Charles Town, WV; his daughter Jeanette “Ginger” Puckett and husband Jeff of Pipe Creek; six grandchildren: Nicole, Kenneth, Tim, Jill, Holly and Leah; two step-grandchildren: Amanda and Leslie; and great-grandchildren/step-grandchildren Markail, April, Georgia Mae, Evelyn, Isabel, Eliana and Xander.
The world lost an Engineer, an Architect, a Teacher, a Land Surveyor, a Scientist and a loving husband, father and grandfather, and a man of sincere faith. Ken was born in Lucas County, Iowa, and grew up during the Great Depression, where his father supported the family with a Sawmill, trading services for goods. Ken often reflected on his high school, with a graduating class of 10 people, and a basketball team he was more-or-less forced to play on, so they would have enough players for a basic team. Ken was drafted into the US Army and served with the Army Corps of Engineers during the Korean conflict, faithfully writing letters for 18 months of deployment, to his new sweetheart, Patricia. They were married not long after his return to the USA, and he later attended the University of Maryland to obtain his Mechanical Engineering degree.
Ken went on to work as a civilian for the Navy, specializing in areas of underwater explosions, and spent many years at David Taylor Model Basin, near Bethesda, MD, part of the Carderock Division of the Naval Surface Warfare Center. A few years later, he received his first US Federal Patent, for one of his inventions. He went on to receive a second patent for another invention, which has saved many lives over the years, by being installed in the operating room on Navy ships, to prevent the shock wave of an underwater explosion, from reaching the patient during surgery.
During his time at David Taylor Model Basin, and later for Naval Sea Systems Command, in Crystal City, VA, Ken and Pat lived in Vienna, VA, where they were nearly life-long members of Wesley United Methodist Church, also in Vienna. Ken and Pat moved to Taylorsville, NC for a few years, in support of Pat’s mother, where Ken served as a Professor at Mitchell Community College in Statesville, NC and also designed for and re-fitted the homes of disabled people, to allow them more independence. He eventually opened his own Land Surveying business in Taylorsville, NC, until he and Pat decided to return to Vienna, VA in the mid-eighties, as it got close to their retirement years, where they reunited with their Wesley United Methodist family and lived there until May of 2018.
That spring, they decided to move to Pipe Creek, to be next-door to family, after Ken suffered a severe stroke the previous fall. In Pipe Creek, he enjoyed the rural setting, watching the deer from his porch most days, and they attended the Lakehills United Methodist Church. Pastor Celia Halfacre provided the private family service, on March 20, at Grimes Funeral Chapel of Bandera.
Ken was the type of man who could fix anything, or do anything, from building houses, to re-building the engines in the family cars, the household plumbing or just anything that was broken. He was always willing to help anyone in need. Ken was an avid gardener of both vegetables and flowers and his children fondly recall their weeding or mowing chores, and the joy that Ken’s gardening brought him and their Mother. Many people will remember Ken for his gift of conversation, and the many interesting and funny stories he was always willing to tell. Again. A simple greeting by a stranger or the wave of a hand, could become an enthusiastic conversation. He will be so missed, but all who knew him, knew that he was of the highest calibre a person could be, and was a man of faith who believed in his Creator. Rest easy, dear PopPop. ​
The Bandera Prophet is grounded on the premise that relevant news delivery is ever-evolving. Founded by newspaper veterans, the Prophet delivers up-to-date information by writers and photographers who combined have 50-plus years of experience in the field and newsroom. Always free to readers, the Prophet is published on multiple platforms, and shared within the online community to more than 150,000 people. No paywalls and no paid subscriptions make news and feature stories immediately available with one click of a button or one swipe on a keypad.
​
All content copyright property of The Bandera Prophet