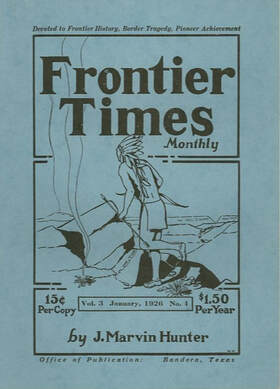 Some of you “old-timers” may remember a magazine called the Frontier Times, published by J. Marvin Hunter. Beginning in 1923, Mr. Hunter gathered stories of pioneer days and was even able to interview a few elderly characters who actually helped settle the frontier. While perusing the pages, I found an article entitled “Historical Reminiscences” by Charles Beseler from the April 1929 issue, a reprint of an article originally published in 1909.
Beseler’s family lived in Sisterdale from 1849 to 1854 in a log house built upon a hill between the Guadalupe River and Sister Creek. During this time, the Comanches were active in the area and on a day in May of 1851, a party of 200 came racing up the hill towards their homestead. In a cloud of dust, yelling and hollering, the Indians dismounted in front of the house and began demanding “pan,” or bread. The family was taken aback by their appearance – what Beseler described as, “awfully ugly and dirty with scar-red faces and their bodies half naked.”
Frightened and trembling, the family watched helplessly as the Comanches entered the house without invitation. They were fascinated by the cooking stove and began helping themselves to whatever they could carry. The only thing saved was the beds in which Beseler’s parents sat on to keep those from leaving, though the Comanches did try to take the bedding from under them.
The Indians’ fascination with bottles distracted them as there were plenty of bottles laying around outside because, “the few settlers of Sisterdale knew very well how to mix their solitary life with happy hours and merriment, and whiskey was cheap in those days.” Their curiosity sated, the Comanches now went back to demanding pan and, through hand motions, indicated they expected the family to bake for them. To keep the Indians happy, Beseler’s mother made a dough of corn meal to cook in the skillet, “The process of baking bread must have been unknown to them for they all squatted around the fire and with visible interest watched….lifting the lid off the skillet and taking a handful of hot dough for a test.”
In addition to dealing with hostile Indians, the settlers struggled to grow crops and raise livestock on land that could be rather rocky. They grew sweet potatoes and corn and ground corn meal by hand on a steel mill that was bolted to a tree. To buy flour or other needed supplies, they traveled by oxen cart to New Braunfels or to Indianola, the latter taking a full two months to make the round-trip to the coast. The settlers were primarily accomplished men from Germany who attempted to maintain as many enjoyments of life as possible under the harsh conditions of living on the Texas frontier. They enjoyed the freedom of owning their own land and would gather at each other’s homes to philosophize, sing and enjoy a communal keg of spirits, a tradition that carries on into modern times.
​
The Bandera Prophet is grounded on the premise that relevant news delivery is ever-evolving. Founded by newspaper veterans, the Prophet delivers up-to-date information by writers and photographers who combined have 50-plus years of experience in the field and newsroom. Always free to readers, the Prophet is published on multiple platforms, and shared within the online community to more than 150,000 people. No paywalls and no paid subscriptions make news and feature stories immediately available with one click of a button or one swipe on a keypad.
​
All content copyright property of The Bandera Prophet