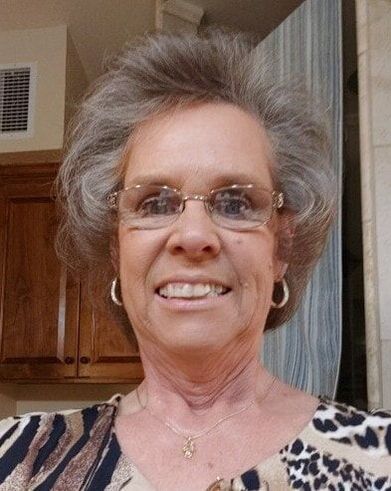 Donna Jean McCaa Sopchak, 62, of Pipe Creek, passed away on Thursday, April 2, 2020 in San Antonio. Donna was born on March 23, 1958, in Houston, Texas to parents William Wayne and Bettie Jean Pritchett McCaa.
Donna grew up in Humble, Texas, a fighting “Humble Wildcat”. Donna went to Humble High School, graduating in 1976. A third generation from Humble, there were few that didn’t know Billy Wayne, Bettie Jean, or one of the McCaa kids. Even though Donna’s kids didn’t attend Humble High School, they lived in the same zip code and she always bled purple.
In 1975, Donna met the first love of her life, Ron Walt Sopchak, of Huffman, Texas. Ron was a rough and tough football player who couldn’t break the tackle from Donna. In 1977, the two were married at First Baptist Church in Humble. The two would start their family and love story here. Donna cared for many children, including their own, at their family home in Humble. Donna and Ron later moved to Pipe Creek in 2007.
Donna is preceded in death by her father William Wayne McCaa; father-in-law Frank Sopchak; grandparents Doris and George E. Pritchett, Ola and Gray McCaa.
She is survived by the love of her life, Ron Walt Sopchak; her children William Kyle Sopchak and wife Kari, Kristina Rene Sopchak Bruns and husband John, Kara Michelle Sopchak Spangler and husband Dustin; her grandchildren Hayden Sopchak, Addison Sopchak, Kylea Sopchak, Landon Bruns, Kohen Bruns, Logan Spangler, Dylan Spangler and Scotty Spangler; mother Betty Jean Pritchett McCaa; mother-in-law Waldine Lois Sopchak; siblings George McCaa and wife Karen, Alisa McCaa Bullock and husband Matthew, and Wendell McCaa; numerous nieces and nephews and other relatives and friends.
Donna always said “God never shut a door, without opening a window.” Thus, God opened a window for her family to spend more time planning her celebration of life.
Visitation will be Friday, May 29, from 5-8 p.m. A memorial service will be Saturday, May 30, at 10 a.m. Both will held at at Deerbrook Baptist Church, 400 E. Main St., Humble, TX 77338.

A Letter From Donna’s Kids and Ron
Our mother loved Dad, us and her grandchildren fiercely. We mentioned earlier that Dad was the “first” love of her life, and that’s because we believe the other loves of her life were her children and grandchildren, or as she called them, her “grandloves”.  For those that ever called our house, they should remember the answering machine with mom saying (with an English accent) “you’ve reached the Nanny of the Sopchak residence”. There wasn’t a birthday, dance, cheer, soccer game, cow show, baseball game, public speaking, birth or anything Mom didn’t do everything in her power to be in attendance to; if she could physically make it happen, she would be there. In the last 20 years, since cell phones became more useful; she and her cell phone would make their appearances, along with her camera (lucky for her, the camera was built in to the phone). Mom did so many things right and perfect – like making sure our Christmas lists were completed (and purchased), or cooking a meal or parenting us. One time, she was checking on Kyle and as he was just about ready for the next dance at Wilson Road Hall (thankfully he had answered honestly when Mom asked where he would be), he felt a tap on the shoulder. It was Mom – she said “Can I have this dance?” Kyle said, “yes ma’am – you sure can.” That was the thing about Mom – she kept us honest and raised us well. Mom was often the person the girls would call for so many different things like “mom, my dryer is going out, what do you think I should get”… she was the “go-to”, and if she didn’t know the answer, she would find it. She was tough, and she was a “go-getter”, if she wanted it, you’d best believe she would work hard to get it; she was always a worker and always busy.  Speaking of being the “go-to” and her cell phone, you could also bet on the fact that no matter where she was or when, her cell phone would be ringing; undoubtedly, it was one of us, or dad, needing some of her words of wisdom. Every one of us used our drives to work, school or home from a baseball game to soak up some time with mom.
As great as our mom was, there were a few things she couldn’t do well. For example, Mom couldn’t wink. Dad said he would wink at her and when she went to wink back, she’d close both of her eyes, though maybe it was just her way of double-winking, maybe? She could sew us a quilt, she could whip us up dinner, but the other thing she couldn’t do well was to teach us how to not miss her when she passed away. We all know that despite what people say, yes, Mom WOULD want us to make a big deal, and cry; she would never turn down attention, especially coming from the loves of her life. We love you and you will be so greatly missed, Mom. ​
The Bandera Prophet is grounded on the premise that relevant news delivery is ever-evolving. Founded by newspaper veterans, the Prophet delivers up-to-date information by writers and photographers who combined have 50-plus years of experience in the field and newsroom. Completely free to readers, the Prophet is published on multiple platforms, and shared within the online community. No paywalls and no paid subscriptions
make news, sports, feature stories and more immediately available with one click of a button or one swipe on a keypad.
All content copyright property of The Bandera Prophet