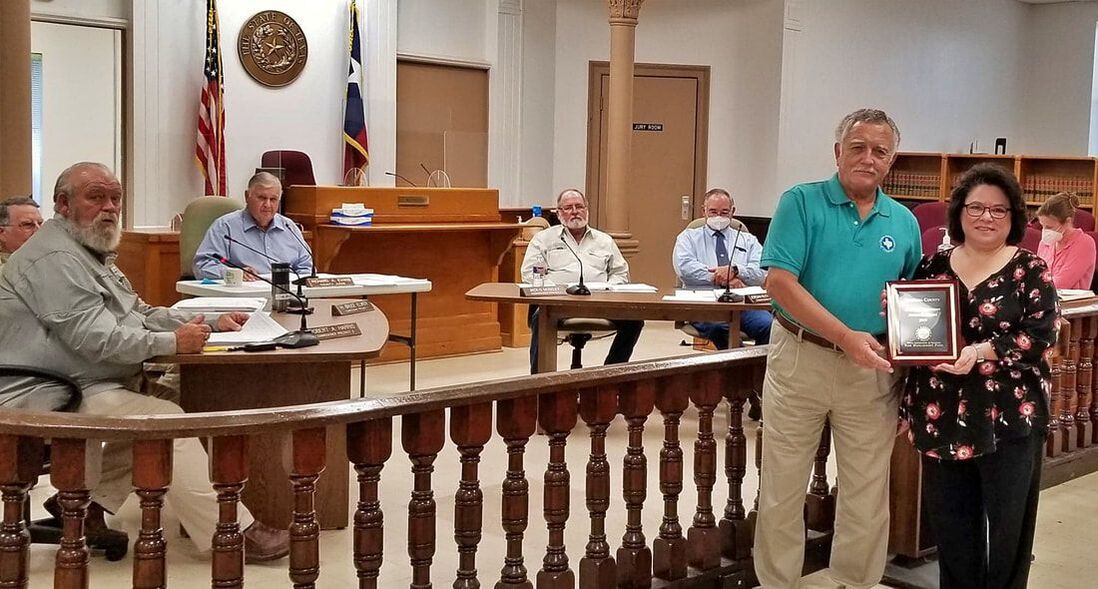 Larry Boccarccio, of the Texas Association of Counties, presents the 2019 Safety Award to Bandera County Human Resources Director Sharon Dowda. Boccarccio said this award is not only an acclamation but important to the county budget. He said because the county has had no worker compensation claims, the premiums have not only remained the same, but are substantially lower than the state average, thus leading to a lower budget.

During the public forum of the Sept. 10 Commissioners’ Court regular session, Jarret Lamb spoke on behalf of private property owners in the Flying L subdivision. His concern was that certain private property owners, specifically of Lots 4 and 5 of section 5a were being denied access to a public thoroughfare. He had already visited the location with one commissioner and the county engineer, and asked the court to look into the matter.
Susan Junker, of American Legion Post 157, spoke on the upcoming 100th birthday of the American Legion on Nov. 7. She elaborated on the core tenets of the Legion and its rich heritage in Bandera, since the first post was commissioned Sept. 9, 1920.
Art Crawford, of Silver Sage, thanked the county and Jack Moseley for the use of Mansfield park, and Sheriff Dan Butts for security and traffic control during Food Fest. The Silver Sage, in conjunction with the San Antonio Area Food Bank, distributed more than 60,000 pounds of food to 1,328 families.
Crawford also mentioned that in February, the Silver Sage distributed about 2,868 meals to elderly and home bound people. In August, the number rose to 8,468.
They also increased from 75 volunteers to 141, and they still need more.

From the Regular Agenda
Commissioners approved closing 25th St., between PR 37 and 26th St., to the public. The land is owned by seven individuals who are in agreement.
No comments were made during the public hearing on the proposed 2020 tax rate of $0.6769 per $100 valuation. The vote to approve the tax rate was unanimous.
Commissioners renewed their meeting days as the second and fourth Thursday of each month, however their Oct. 8 session will be rescheduled for Oct. 13, to allow commissioners to attend the annual County Judge and Commissioners Conference.
Commissioners approved an application for a $219,275 grant from the Perry and Ruby Stevens Foundation to purchase a new ambulance.
The Lake Medina RV Resort donated 29 chairs, valued at about $290, for use at the Lakehills Annex.
The county closed on the EMS building and property last week, with an approximate move-in date of Sept. 24, depending on the weather.
Pct. 2 Commissioner Bobby Harris announced that the County Park at Medina Lake brought in more than $50,000 in the last 30 days. He advised the court that he has made improvements to the park, and to arrive early for the best chance to get in.
The Bandera Prophet is grounded on the premise that relevant news delivery is ever-evolving. Founded by newspaper veterans, the Prophet delivers up-to-date information by writers and photographers who combined have 50-plus years of experience in the field and newsroom. Always free to readers, the Prophet is published on multiple platforms, and shared within the online community to more than 150,000 people. No paywalls and no paid subscriptions make news and feature stories immediately available with one click of a button or one swipe on a keypad.
​
All content copyright property of The Bandera Prophet