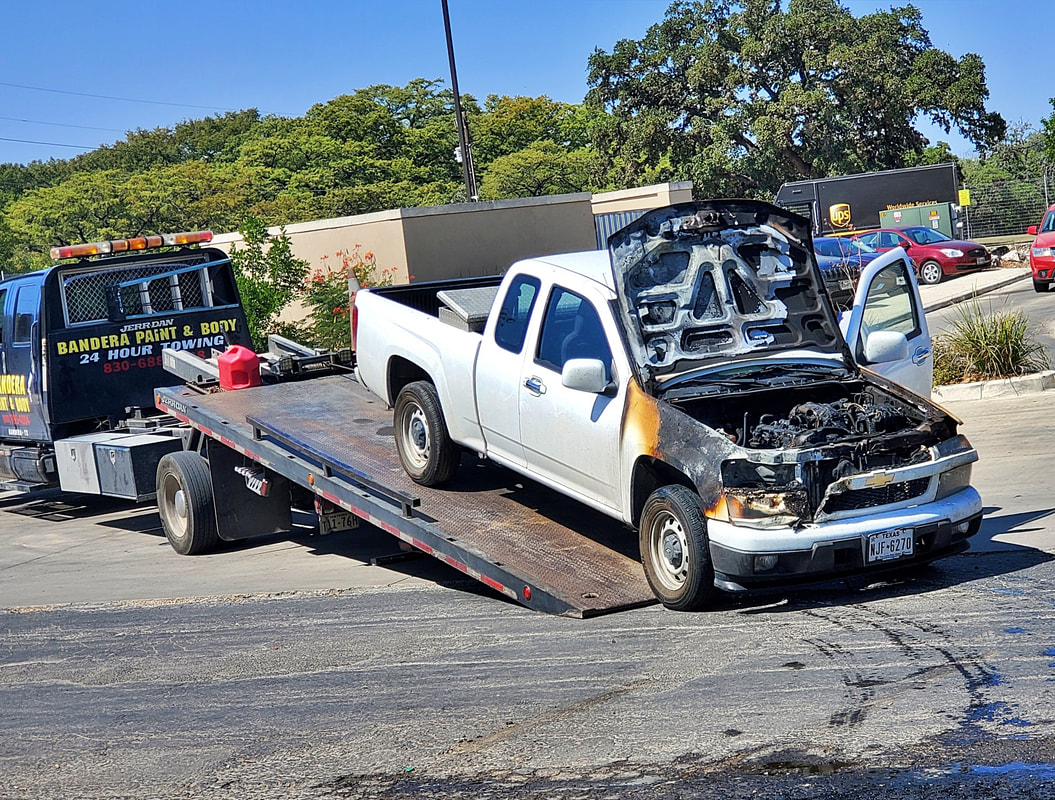 Bandera Paint & Body hauls a truck out of Bandera after it caught on fire next to Lowe's Monday afternoon.

A Bandera County man is uninjured after his vehicle burst into flames this afternoon. According to Fire Marshal John Stith, the man was napping in his truck while it was parked and on in between Lowe’s and Burger King. A bystander noticed flames under the hood of the truck, and woke the man up.
Bandera Fire & Rescue extinguished the blaze, and pulled the vehicle away from the buildings.
“The cause of the fire is undetermined,” Stith said.
​
In other news, three motorcyclists were hospitalized after two separate accidents over the weekend. On Saturday, a motorcyclist attempted to outrun state troopers during a traffic stop. After a pursuit through Pipe Creek, he crashed into another motorcycle and was airlifted with serious injuries to a San Antonio hospital.
Department of Public Safety Sgt. Eric Morgan said a trooper tried to stop the motorcyclist for speeding and having blue ground effect lighting. State law requires the lights to be white or amber.
The driver led troopers from Hwy. 16 south of Pipe Creek to FM 1283, and down PR 37 back to Hwy. 16. Morgan said the subject struck another motorcyclist near the location of the original stop attempt.
“The other person was not injured, and he rode his motorcycle away from the scene,” Morgan said, adding the case is still ongoing.
A second accident occurred on FM 337 when two motorcyclists crashed into each other. Morgan said one driver was airlifted to a San Antonio hospital, the other was transported by ambulance.
Despite the accidents, Morgan said the weekend was uneventful for law enforcement - a good thing considering how many people were in Bandera County for the bike rally, he said. Roughly 10 troopers were on duty for each of the two shifts per day throughout the weekend.
“That was our goal with having so many troopers there,” Morgan said.