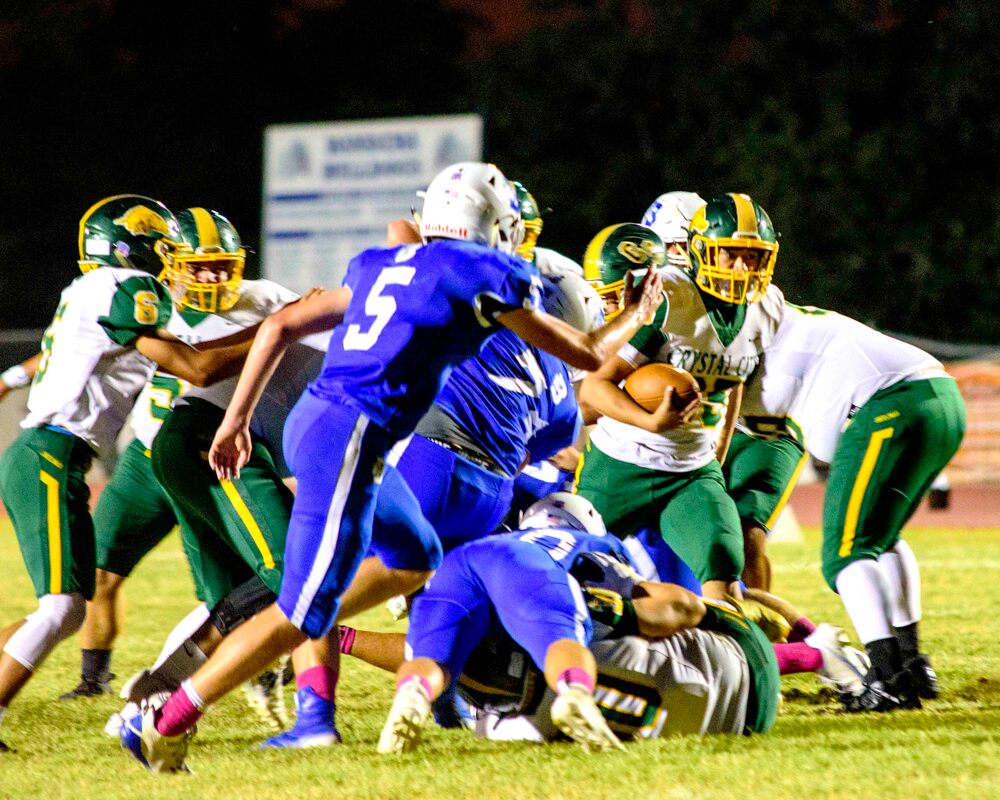 A very much improved Bandera Bulldog varsity football team hosted the Crystal City Javelinas in front on a sold out Homecoming crowd at Bulldog Stadium.
After going 0-4 in non-district and with a two week break, the Bandera coaches and players went to work on improving the Bulldogs on both sides of the ball. It was evident they had put in some work as the Bulldogs traded blows with the Javelinas throughout the game.
The game started in Bandera's favor as the Bulldogs opened the game and scoring first with their best drive of the season.
A 28-yard completion by Will Paul from Tyler Moore put the Bulldogs up and after a good PAT, it was 7-0  with 5:59 left in the first quarter.
The Javelina's were threatening inside the 10 late in the first and would eventually score on a short pass 53 seconds into the second quarter.
A missed PAT would see the Javelina's trail 7-6.
Both teams had numerous penalties in the second  quarter that negated any momentum for either team.
Crystal City did try a field goal at the buzzer, but it went wide left to keep the score 7-6 as the teams went to the locker rooms.
The second half opened up with Crystal City starting from their own 30 and breaking a 60 yard rush to get to the Bandera 10, but the Bulldog defense came up big and stopped the Javelina's on a fourth and five to force a turnover on downs.
A few plays later, the Bulldogs saw their one point lead vanish when a Crystal City defender shoots the gap to tackle a Bulldog ballcarrier in the endzone for  a safety to make it, 8-7.
Bandera had the benefit of playing on a short field for most of the third quarter and it paid off when  Luke Barnett, in his first varsity start, waltzed into the endzone untouched on a 4 yard rush to score. A bad snap led to a missed PAT to make it 13-8 headed into the fourth quarter.
The game continued to be a defensive struggle until the final two minutes and it turned into a surreal scene with highs and lows on both sides.
Crystal City scored with 1:47 left in the game to go up 14-13 and another missed conversion added nothing, but things were looking bad for Bandera.
That changes just seconds later when the Bulldogs  score on a 70 yard catch and run from Moore to Brandon Miller with 1:09 left to make it 19-14. A failed two point conversion kept the score the same,  but things were looking good for the home team.
Elation turned to dismay just over a minute later when a Javelina receiver got behind the Bulldog secondary and scored on a 26 yard completion to make it 20-19 with just six seconds left on the clock.
A good two point conversion, another pass into the right corner of the end zone, makes it a final, 22-19.
The Bulldogs had 217 yards of offense this week, 117 passing and 100 rushing, and the defense looked better, but a few mistakes and some penalties once again cost the team.
"We got a couple of guys back that helped on both sides of the ball and we lost a few guys so it sort of evens out. The little things that count, sticking with your man, finishing a block, staying inbounds, and remembering your blocking assignments, all add up though. I am really proud of the effort the team put out this week. We just had a few mistakes that we shouldn't be making this far into the season," Coach Joel Fontenot-Amedee said.
With the loss, Bandera goes to 0-5 (0-1 district) with Carrizo Springs 1-5 (0-1) on the schedule for this Friday.
The Wildcats ran into the Devine Warhorse buzzsaw last week in a 63-21 loss.
They are lead by a trio of QBs but freshman Evan Castellanos had the start against Devine where he went 14-26-200-1-1 in the loss.
Carrizo's run game is their bread and butter, led by Austin Reyes who has over half of Carrizo's 1128 yards rushing with 634 yards on 69 carries. Also, keep an eye on Joshua Carrizales in the backfield, he has 282 yards on the season.
David Castro (9), Sergio Sonora (15) and David McDaniel (21) anchor the Wildcat's defense with 90 tackles between the three.
For the rest of the season, it is going to be hard for the Bulldog faithful to follow the Bulldogs on the road.
Due to social distancing and CoVid concerns, the District Executive Committee (DEC) has determined that for all road teams in district play, only two people per player will be allowed to attend and they must be on "the list" to gain entry.
Carrizo also will not allow anyone under high school age into the game, so that is something else to be aware of. The band and the cheerleaders will not be allowed to travel either.
If you have any questions, call the Bandera A.D. office, the number is on the BISD website.
You can follow the Bandera Prophet Facebook page for updates at the quarters for this and all varsity games.