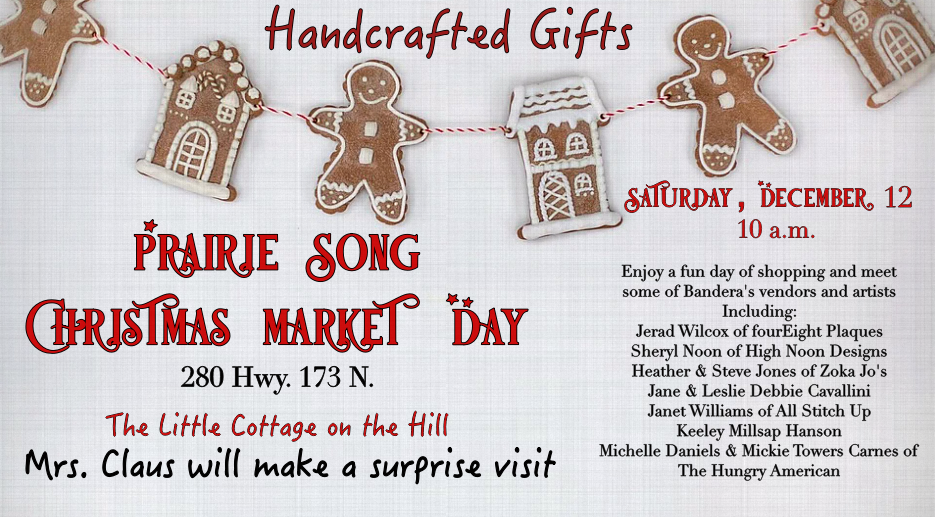 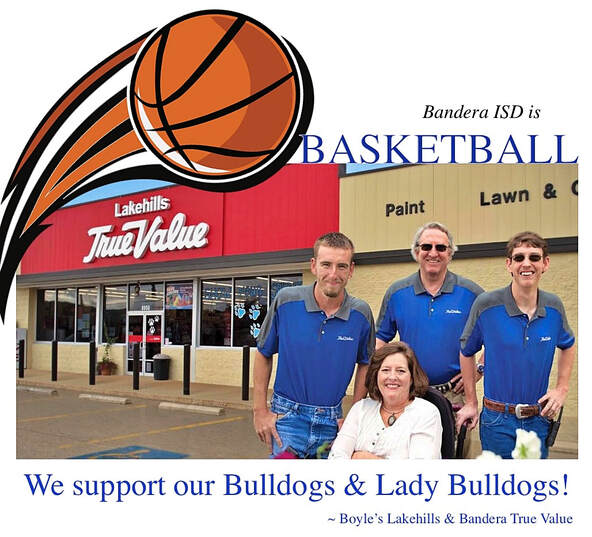 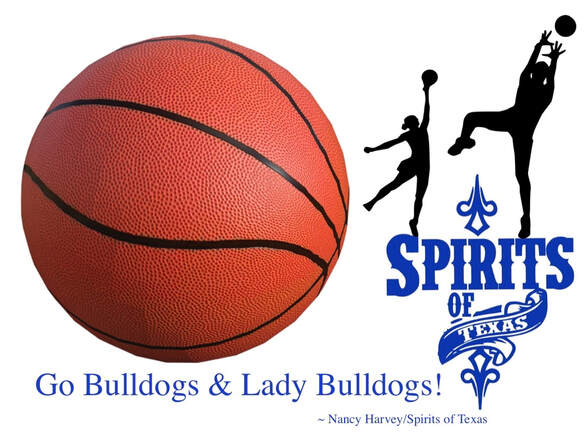 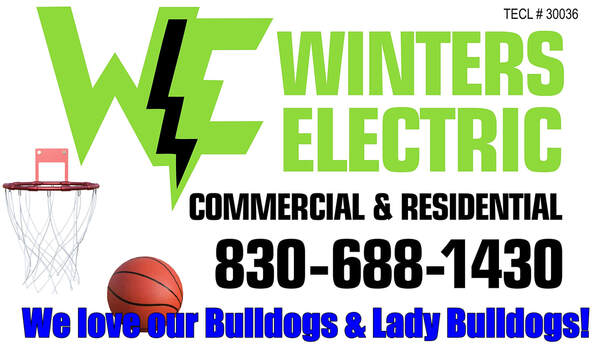 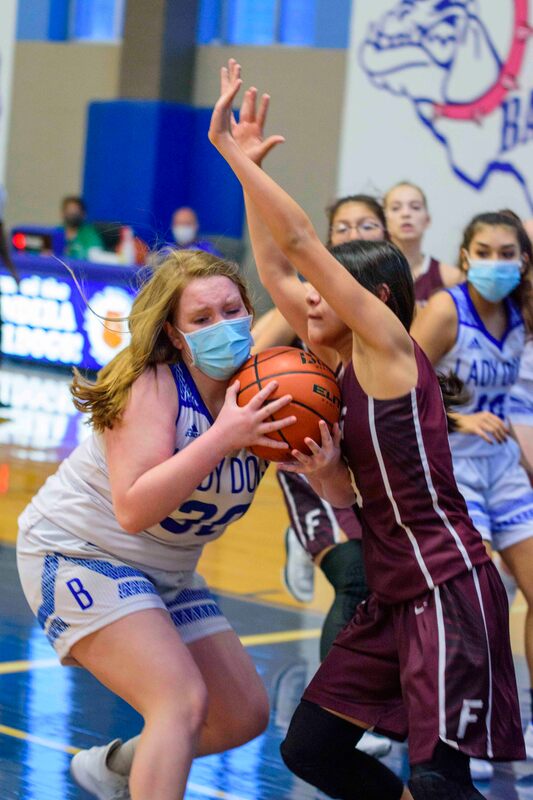 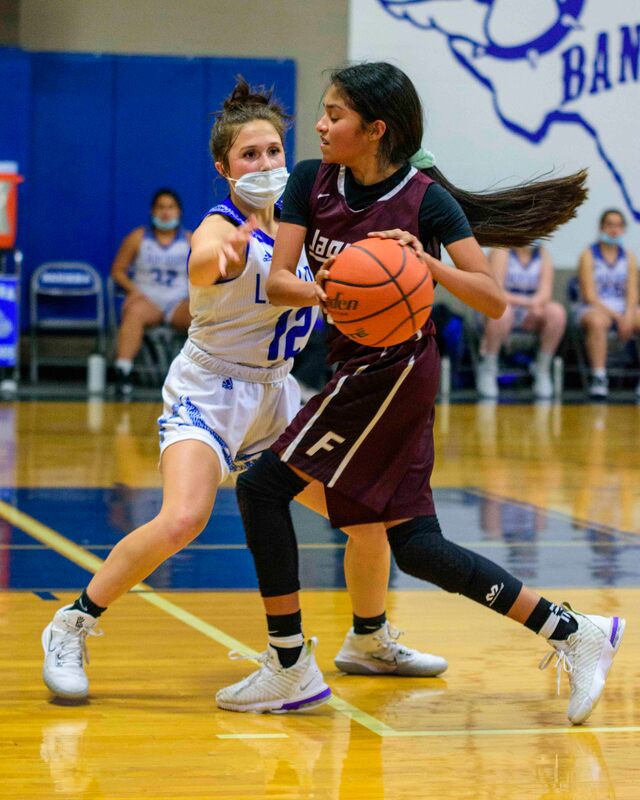 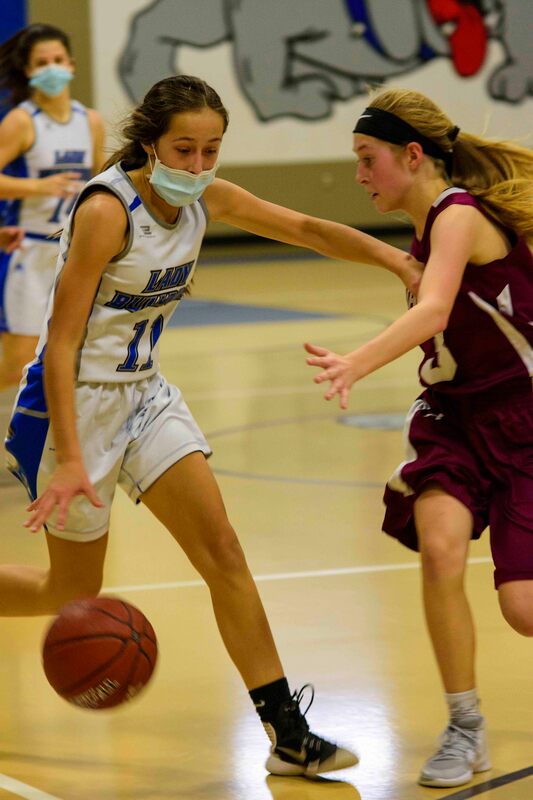 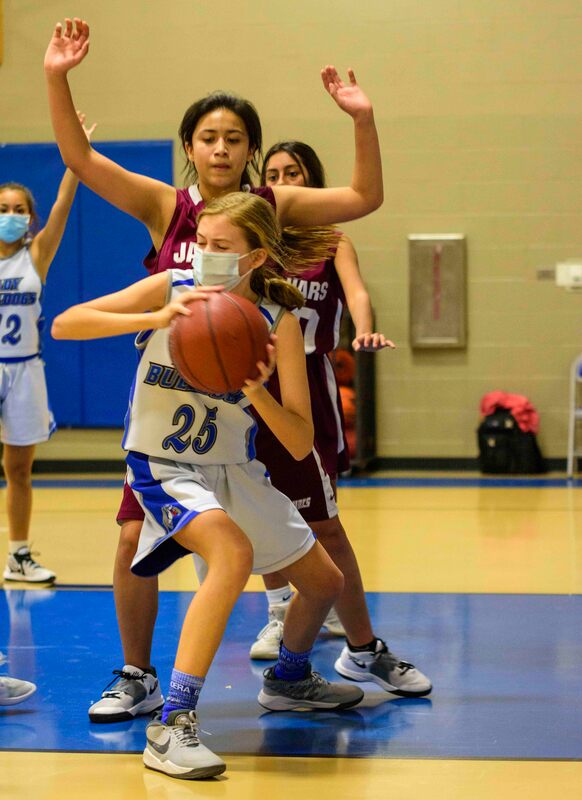 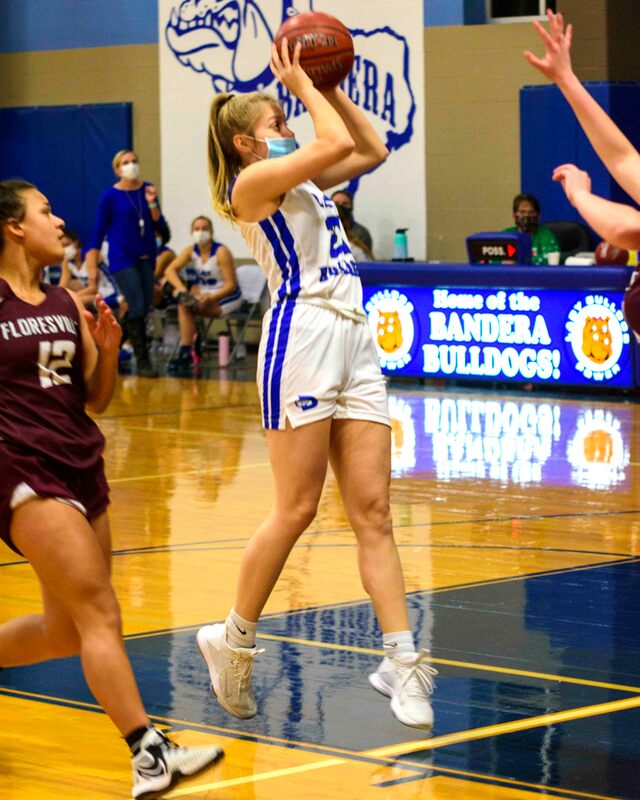 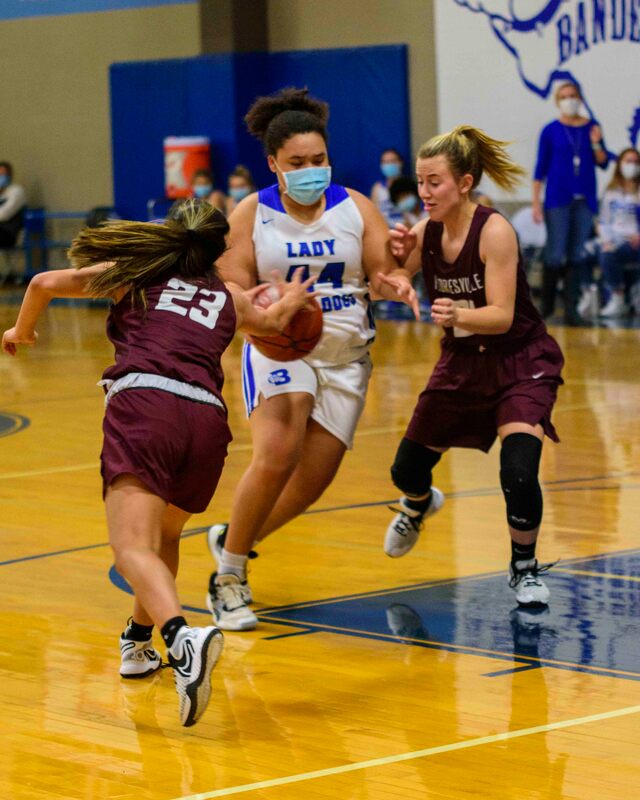 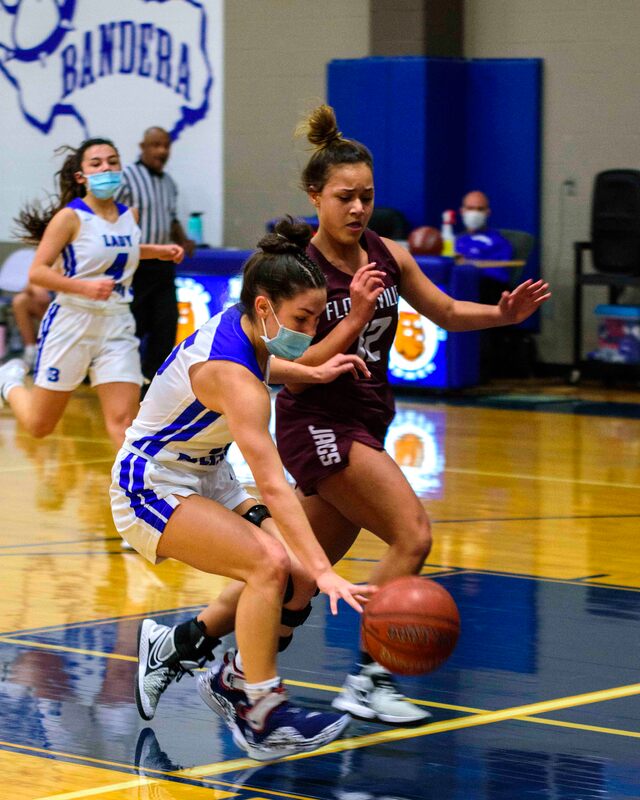 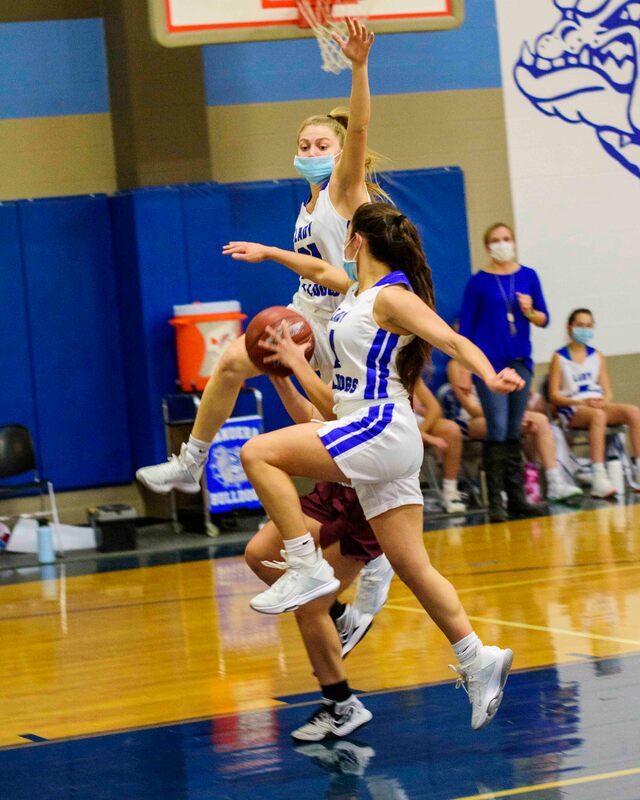 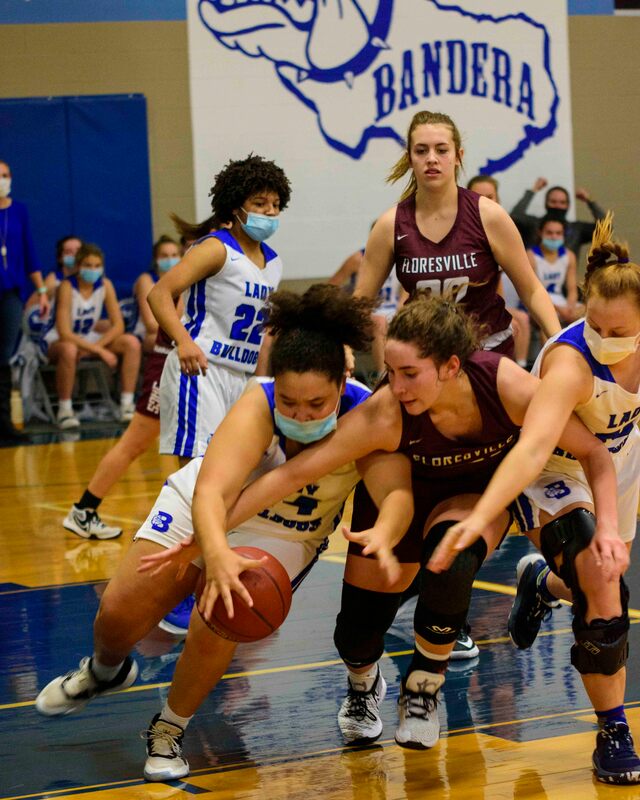 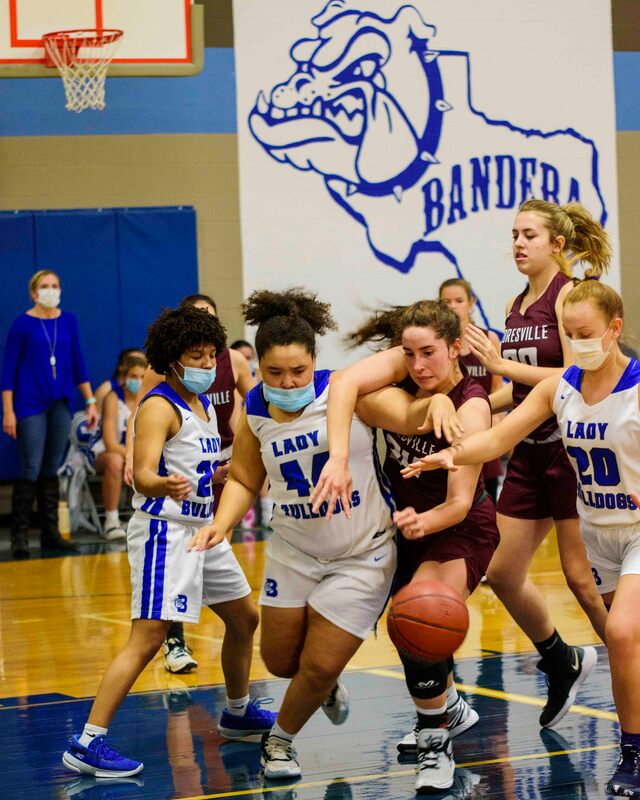 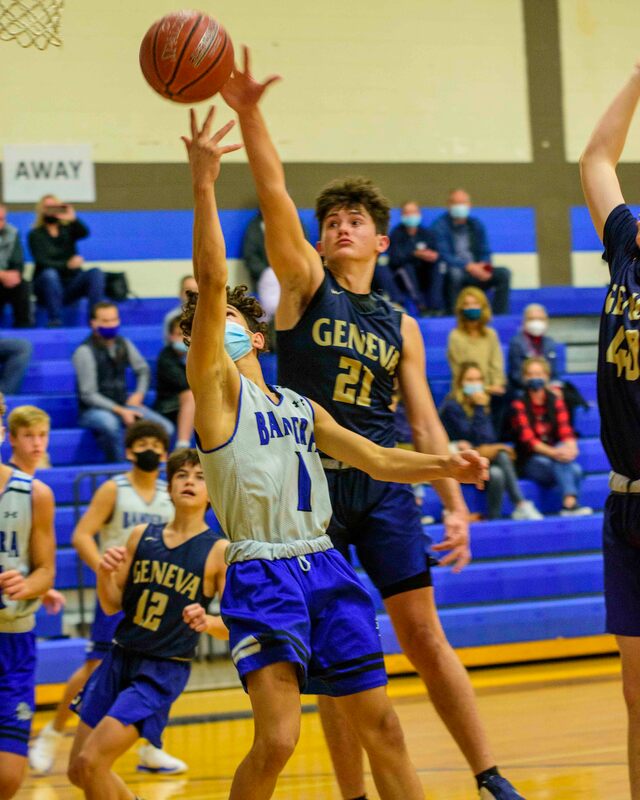 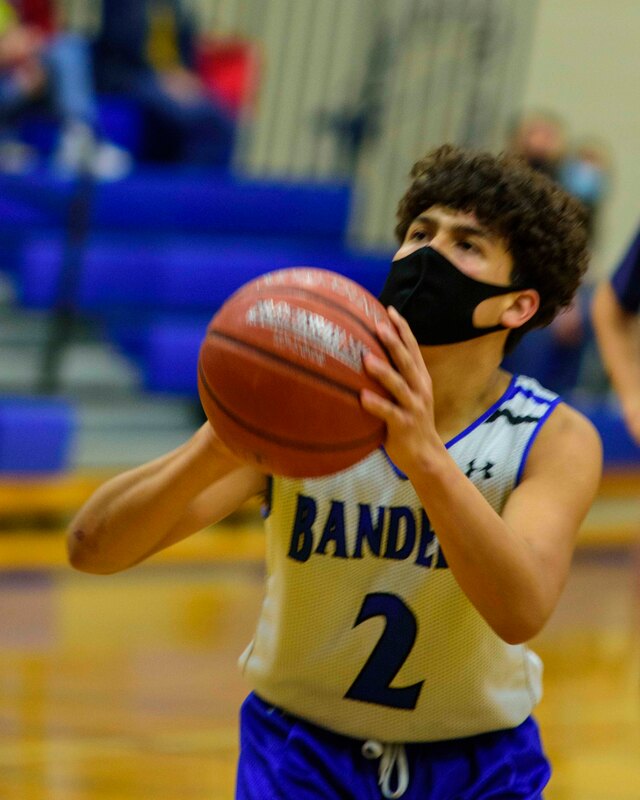 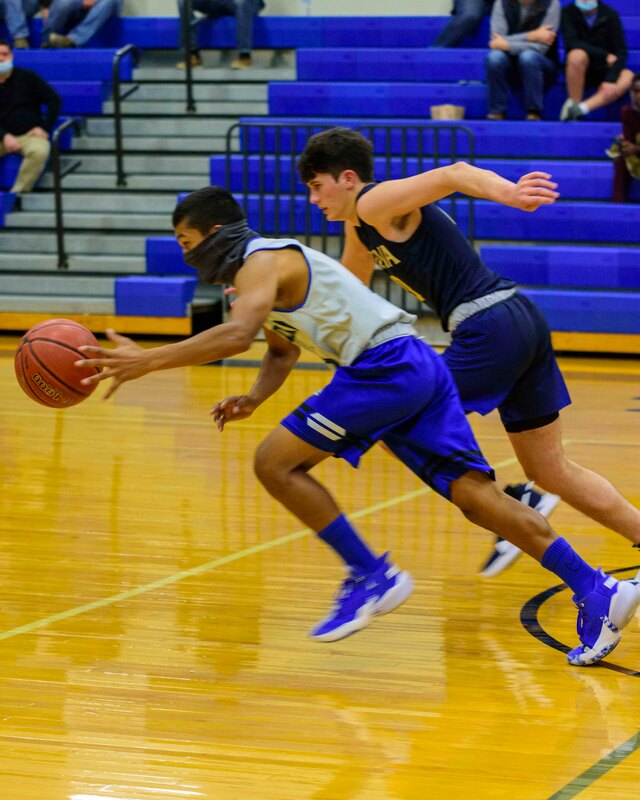 With Chris Darus on IR for two weeks, Bulldog Varsity Head Coach, Brady Keene, will take the helm in his absence.
The Bandera Bulldog basketball teams played a total of nine games this past week, with Pleasanton there last night, Harper and Boerne Geneva at home Friday and taking on Gonzales, Saturday.

Varsity
Pleasanton
After playing one of their best first quarters of the season to jump out to an early lead on the Eagles, the Bulldogs struggled against Pleasanton’s full-court pressure in the second.
Self-inflicted errors by Bandera allowed the Eagles to take control of the game and pull away before the Bulldogs settled down and got back into a rhythm to cut into the deficit in the third and fourth quarters.
Luke Barnett had a team-high 12 points in the loss while Gunnar Winkler added 8. All 12 varsity players contributed to the scoring effort. Lukas Jackson had a team-high eight rebounds and Kayden Brown had seven rebounds in the 84-49 loss.

Harper
After the tough loss against Pleasanton, the Bulldogs bounced back nicely Friday night with a 62-55 win over Harper.
Bandera held off a furious fourth quarter comeback effort by the Longhorns and sealed the victory with clutch defensive stops down the stretch.
Barnett again led the way with 14 points, while Trace Decker added 12 points, seven rebounds and four assists. Winkler had 9 points, Lukas Jackson had 8 points and 14 rebounds and Tyler Moore had 8 points and seven boards to pace the Bulldogs in the win.

Gonzales
In the final game of the week, Bandera got off to a slow start in the first half as Gonzales caught fire from behind the arc early in the game.
The Bulldogs competed much more efficiently and cut the deficit in half after the halftime break before running out of gas down the stretch and falling to the Apaches, 79-57.
Barnett continued to lead the way offensively, scoring 13 points, while Lukas Jackson (8), Liam DeMarchi (8), Moore (5), Winkler (5), Decker (4), Kayden Brown (3) and Ryan Perez (2) also contributed on the scoreboard.
The Bulldogs dropped to 3-4 on the season and will be back in action on Tuesday on the road against Ingram. It will be another three-game week for Bandera, as the team travels to Blanco on Friday night before hosting Comfort on Saturday.
Varsity tipoff is at 1:30 p.m.


JV Basketball
After falling to a talented Pleasanton team on Tuesday, the Bulldogs’ JV put together two impressive wins to close out the week by defeating both Harper and Gonzales on Friday and Saturday.

Harper
Bandera dominated Harper from start to finish thanks to a complete team effort that saw all 10 players in uniform contribute on the scoreboard.
The Bulldogs held the Longhorns to just points in the first, third, and fourth quarters while posting an impressive 24 points of their own in the second to fuel a 63-12 win.  Salvador Enriquez and Brice Clemens led the way with 10 points each, Kyle Morgan and Conner Vick had 7 points each, Jack Pate and Braden Cox each scored 6, Jase Chelin and Noah Barnett each scored 5, Coleton Trenkelbach scored 4, and Brandon Miller had 3 in the win.

Gonzales
The Bulldog JV responded with another strong effort against Gonzales, picking up a 35-28 win.
Clemens and Morgan led the way with 10 points each, Brandon Miller and Noah Barnett had 5 each, Coleton Trenkelbach scored 3 points and Jase Chelin finished with 2.
The wins evened the JV's record at 3-3 on the season, and they look to get above the .500 mark with three games on the docket next week.


Freshmen
After picking up a big win over Pleasanton on Tuesday, the freshmen Bulldogs dropped a pair of hard-fought, close battles to the Boerne Geneva JV Eagles on Friday and the Gonzales freshmen on Saturday.

Pleasanton
Tuesday’s game against Pleasanton saw the Bulldogs post a rare defensive shutout in the third quarter while scoring 16 points of their own to pull away. Bandera finished the game on a 22-8 run, securing a 44-25 victory after leading by just five at the halftime break.
Alex Dirck had a team-high 9 points, Corben Gonzales had 8 points, Jesse Cardenas 7, Tim Danour had 6, Jorge Cabasos had 6, Hank Pate had 4, Adan Ramos had 3 and Isaac Segura had 1.

Geneva
Bandera's freshmen hosted the Boerne Geneva JV Eagles Friday and gave the Eagles everything they could handle until the final whistle. Dirck scored 19 points to lead the way as Bandera fought back to within a field goal in the final minute before Geneva edged out a 7-point win down the stretch. In addition to Dirck’s big day, Gonzales had 10 points, , Cardenas had 9, Adan Ramos had 4 and Cale Barnett added 2.

Gonzales
The freshmen got off to an extremely slow start with just two points in the first quarter before battling all the way back to have a shot at tying the game at the final buzzer. The potential game-tying shot came up just short, and Gonzales held on for a 40-38 win. Cardenas had a team-high 14 points and Cale Barnett added 8. Corben Gonzales and Dirck scored 6 each, and Jorge Cabasos added 4.
All of Dirck's points came in the fourth.
The freshmen Bulldogs are now 4-3 on the season. The Bulldogs will be back in action on Friday against Blanco and will then host Comfort on Saturday.
The Bandera Prophet is grounded on the premise that relevant news delivery is ever-evolving. Founded by newspaper veterans, the Prophet delivers up-to-date information by writers and photographers who combined have 50-plus years of experience in the field and newsroom. Completely free to readers, the Prophet is published on multiple platforms, and shared within the online community. No paywalls and no paid subscriptions
make news, sports, feature stories and more immediately available with one click of a button or one swipe on a keypad.
All content copyright property of The Bandera Prophet