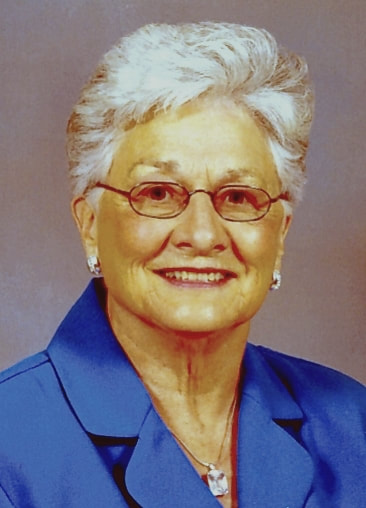 Betty Jo (Thompson) Yeager or affectionately called “Mama,” was born Feb. 24, 1932 in Utopia, Texas. She passed away on Dec. 11, 2020, at the age of 88 in her childhood home.
Betty moved with her family to Ozona in 1943, where she completed high school in 1949. Then she attended Sul Ross University, where she met and married Gene Albert Yeager on June 30, 1950.
After Gene completed his time in the service he went on to earn his degree from Texas A&M University. Betty worked as a secretary for three of Gene’s professors and always got a kick out of earning her P.H.T. degree (Putting Hubby Through).
Betty was a member of the Baptist Church in Utopia where anytime good Christian music was playing you could find her on the front row. She was a friend to everyone who knew her. She was a high school volleyball player, bowler in the women’s league in Forney, and an avid Texas A&M and Spurs sports fan. Betty loved her family and was especially active in the lives of her grandsons.
She was preceded in death by her parents Curly and Pearl (Norman) Thompson; brother Bud Thompson; and husband Gene Yeager.
Betty is survived by her son Dennis and wife Jan; grandsons Jason and Todd, Todd’s wife Ryan and great grandsons Griffin and Oliver.
A Celebration of Life Graveside Service will be held Wednesday, Dec. 16, 1 p.m., at Vanderpool Cemetery, Vanderpool, with Brother Lee Bevly officiating.
The Bandera Prophet is grounded on the premise that relevant news delivery is ever-evolving. Founded by newspaper veterans, the Prophet delivers up-to-date information by writers and photographers who combined have 50-plus years of experience in the field and newsroom. Always free to readers, the Prophet is published on multiple platforms, and shared within the online community to more than 150,000 people. No paywalls and no paid subscriptions make news and feature stories immediately available with one click of a button or one swipe on a keypad.
​
All content copyright property of The Bandera Prophet