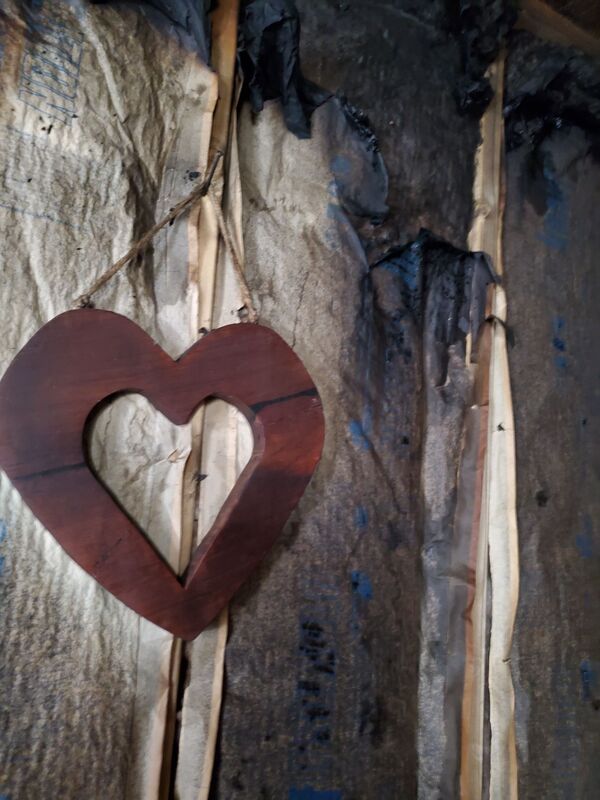 A gift from her husband, Heather Jones hangs on to this heart left undestroyed in a housefire as a symbol of hope and love.

Pipe Creek residents Heather and Steve Jones are unharmed after a house fire destroyed part of their home yesterday evening.
Their master bedroom, a separate cabin from the rest of their house, caught fire after a space heater plug failed and ignited in the outlet. Heather Jones said her son noticed smoke coming from the cabin at around 7 p.m. last night.
“We were able to get it mostly contained and the Medina Lake Volunteer Fire Department finished putting it out,” she said. “Their response time was amazing! Can't thank them enough!”
Spearheading a fundraiser for the family, Jerad Wilcox, owner of fourEight Plaques & Customs and Marine veteran, said clothes, shoes, bedding, a tablet used for work and several other things were destroyed.
“They give so much even when they themselves have so little, but they have always had an abundance of love,” Wilcox said, adding the family helps organize the monthly food drive at Mansfield Park, volunteers with Meals on Wheels and are volunteer firefighters. “The Jones family has done so much to help everyone else in need in our community without ever asking for anything in return.”
Wilcox said anyone who is able may drop off donations at his store. Also an account has been set up at Texas Hill Country Bank called the Jones Family Fire Relief Fund.
The Bandera Prophet is grounded on the premise that relevant news delivery is ever-evolving. Founded by newspaper veterans, the Prophet delivers up-to-date information by writers and photographers who combined have 50-plus years of experience in the field and newsroom.
Completely free to readers, the Prophet is published on multiple platforms, and shared within the online community. No paywalls and no paid subscriptions required, the Prophet is built on the belief that information is so necessary to our community, that it should not depend on your income.
At the Prophet, news, sports, feature stories and more are immediately available with one click of a button or one swipe on a keypad.
All content copyright property of The Bandera Prophet