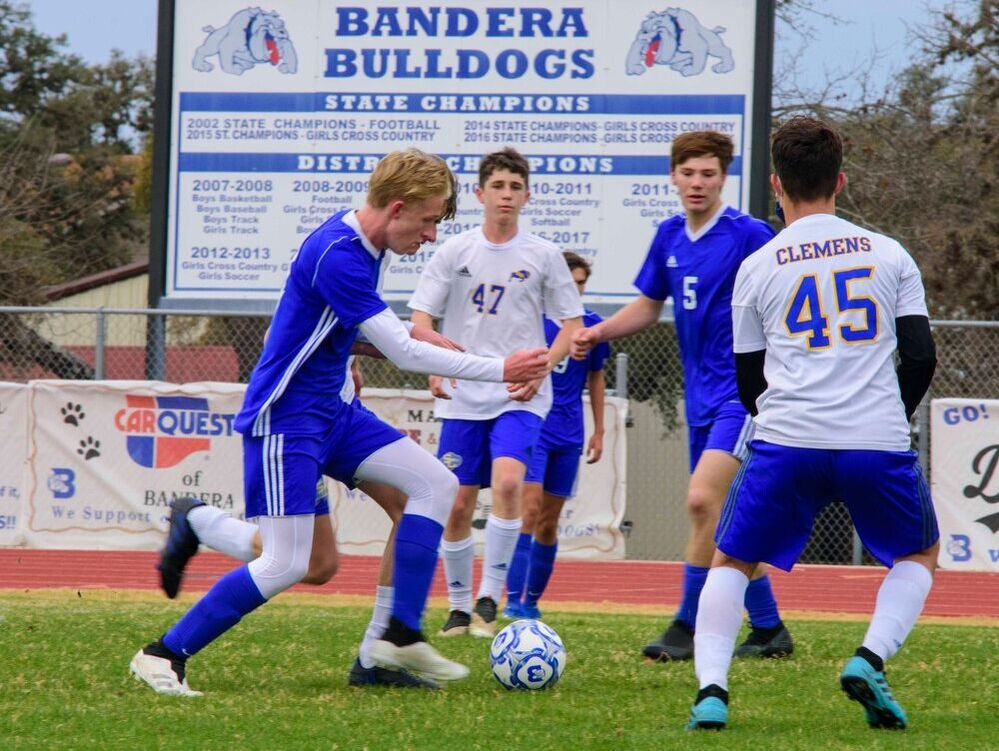 Girls Soccer
After two cancellations for games on the non-district schedule, Bandera Lady Bulldog varsity soccer finally got to play a match as they travelled to Burnet to take on their Lady Bulldogs last Tuesday. Playing a mix of seasoned and new varsity players, Bandera fought hard, but lost by a 5-0 tally.
"We had some bright spots despite the score, our two goalkeepers, Maci Morrison and Jasmine Thane, combined for 31 saves, Hannah Edwards had nine shots on goal, Courtney Dowda led the team with six steals and freshmen, Jayden Mason, Izabel Kennedy and Emily Presa, showed a lot of grit in their first start as varsity players," coach Keith Kuenzel said.
Unless a pickup game is found, the next match on the schedule is a home contest against Somerset on Wed. Jan. 20, which is also Senior Night.

Boys Soccer
The JV Bulldogs took a 2-0 decision at Bulldog Stadium Saturday against the S.A. Clemens JV squad. The contest was evenly matched as evidenced by a 0-0 score at the half, but the Bulldogs scored late in the second half to get the win. Cody Jureczki was in net for Bandera and gets the shutout.
The JV Bulldogs have Uvalde next up on the schedule for a Jan. 19 home date.
The varsity Bulldogs have a scheduled match on the road against Poteet on Tuesday, Jan. 12.
The Bandera Prophet is grounded on the premise that relevant news delivery is ever-evolving. Founded by newspaper veterans, the Prophet delivers up-to-date information by writers and photographers who combined have 50-plus years of experience in the field and newsroom. Completely free to readers, the Prophet is published on multiple platforms, and shared within the online community. No paywalls and no paid subscriptions
make news, sports, feature stories and more immediately available with one click of a button or one swipe on a keypad.
All content copyright property of The Bandera Prophet