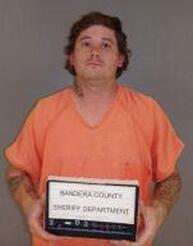 Fatal shooting suspect Austin Small was released from custody Wednesday on a $125,000 bond, according to authorities. Small, 25, is facing charges of murder, two counts of deadly conduct and child endangerment.
Bandera resident Zachary Bower, 22, died Sunday night after being shot in the head just outside the Bandera city limits on Houston Street, according to reports.
Small was arrested in the early morning hours of Feb. 1. He was apprehended by Kerrville law enforcement officers and turned over to the Texas Rangers and the Bandera County Sheriff’s Office.
The Bandera Prophet is grounded on the premise that relevant news delivery is ever-evolving. Founded by newspaper veterans, the Prophet delivers up-to-date information by writers and photographers who combined have 50-plus years of experience in the field and newsroom. Completely free to readers, the Prophet is published on multiple platforms, and shared within the online community. No paywalls and no paid subscriptions
make news, sports, feature stories and more immediately available with one click of a button or one swipe on a keypad.
All content copyright property of The Bandera Prophet