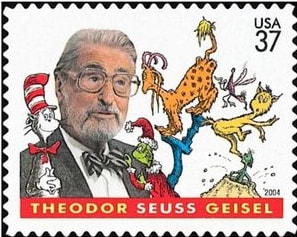 Dr. Seuss and some of his characters, from a commemorative U.S. postage stamp issue in 2004.

​Dr. Seuss, pseudonym of Theodor Seuss Geisel, was born March 2, 1904, in Springfield, Mass. He was best known as an American writer and illustrator of children’s books.
Geisel was rejected by 27 publishers before his first book, And to think That I Saw It on Mulberry Street, was accepted by Vanguard Press in 1937. He went on to publish 44 best-selling books, characterized by nonsense words, playful rhymes and unusual creatures.
Geisel said he was walking home to burn the manuscript home, stinging from his 27th rejection, when he bumped into a friend from college who was just made editor of children’s books at Vanguard.
“If I'd been going down the other side of Madison Avenue, I'd be in the dry-cleaning business today,” Geisel said.
He died September 24, 1991.
The Bandera Prophet is grounded on the premise that relevant news delivery is ever-evolving. Founded by newspaper veterans, the Prophet delivers up-to-date information by writers and photographers who combined have 50-plus years of experience in the field and newsroom. Completely free to readers, the Prophet is published on multiple platforms, and shared within the online community. No paywalls and no paid subscriptions
make news, sports, feature stories and more immediately available with one click of a button or one swipe on a keypad.
All content copyright property of The Bandera Prophet