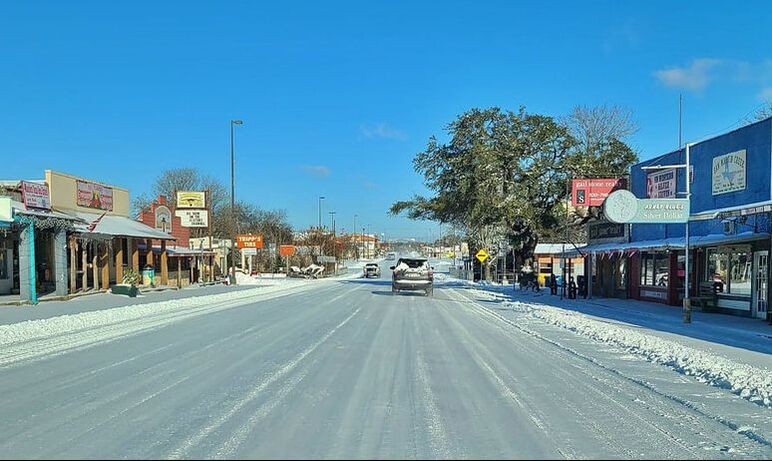 When phones were down, Bandera County answered the call

Bandera County commissioners delivered an after-action report of problems caused by the extreme winter weather two weeks ago, and the creative solutions many departments implemented to keep people safe.
County Judge Richard Evans complimented the Road and Bridge Department and TxDOT (Texas Department of Transportation) for their efforts, despite a flooded office with no heat.
“Road and Bridge did a fabulous job keeping roads open, as well as TxDOT,” Evans said.
Sheriff Dan Butts said some areas with steep hills were inaccessible because they were iced over.
“We can’t fix all the roads all the time,” Butts said, adding the county’s investment in four-wheel drive pickups paid off. “In the past, we would not have been able to get all the places we got to.”
EMS Director Calvin Plummer said the new EMS station worked exactly the way it was built to. An on-site generator kept the heat and lights on during the rolling blackouts. He temporarily moved ambulance units to the Bandera facility to keep them powered up, and commuted throughout the county to help citizens without power fill oxygen tanks and stay warm.
“We couldn’t get certain places because of the hills, the units kept sliding off. Some EMTs took off on foot to get to patients,” Plummer said, adding EMS had 63 patient calls within the five-day period. “It was busy. My staff needs some credit…the EMTs took ambulances some places I didn’t want them to go.”
Pct. 3 Commissioner Bruce Eliker said Fire Marshal John Stith assisted EMS to help take care of patients.
“I want to praise everybody for what they did, because it was a challenge,” Eliker said.
County dispatchers had to contend with lost power and downed phone lines, Emergency Operations Coordinator Carey Reed said. 911 was down for 12 hours, Reed said, and calls were temporarily rerouted to Medina County.
“Every time we got turned off by the coop, the dispatchers would go outside with walkie talkies and cell phones to dispatch,” Butts said, commending his staff. “If we would not have been on black outs we would not have had a problem.”
Evans said the City of Bandera did not experience rolling black-outs.
“It was disappointing to say the least. 911 and dispatch are more important than a beer joint staying open in town,” Evans said. “We did make it with a lot of hard work and innovation.”
Other damages to county facilities included a frozen water pump at the Justice Center, and broken, leaking pipes at the tax office, juvenile probation, Mansfield Park and the County Park in Lakehills.
“All in all I think we fared very well because of the people we have who are dedicated to the county,” Evans said.