The Lady 'Cats meet Kayla Evans at the plate after her homer against Goldthwaite.

Medina ISD
Softball
Medina's Lady 'Cats started the season with an 8-5 decision over Menard and had a strong runnerup finish in the first annual Medina softball tournament.
But, the tables have turned  with the Lady 'Cats suffering three district losses to Harper (20-7), Goldthwaite (n/a)  and Center Point (17-2).
Medina will travel to Junction today as new coach, Larry Jackson, and the team try to get back in the win column.


Bandera ISD
Baseball
Bulldog varsity Baseball is still looking for their first "W" of the season after going 0-3 this past weekend.
Bandera lost a close 5-2 contest to the Devine Warhorses,
had a tough go against Edison, 12-3 and suffered a 17-0 defeat at the hand of Cornerstone.
Devine
The Warhorses took an early 2-0 lead in the top on the second and Bandera scored one in the bottom of the fourth to make things interesting.
Devine added a run in the fifth, sixth and seventh innings and Bandera added one in the sixth.
Brock Cardenas had the complete game for the Bulldogs in the loss.

Edison
The Golden Bears pounded in 12 runs in the first two innings on nine hits to force Bandera's hand. The Bulldogs scored all three of their runs in the third but it wasnt enough to extend the contest.

Cornerstone
The Bulldogs were behind early in the 17-0 loss to Cornerstone. The Warriors scored six runs in the first and dogpiled another 11 in the second to bring the game to an early finish after 2.5 innings. The error bug struck again as Bandera recorded five in two innings.

Soccer
Boys
Bulldog Soccer finished their home games for the season with a rescheduled game against Comal Davenport.
Looking to take the game to Davenport after the 1-1 tie in the teams last meeting, Miles Short found the back of the net to give Bandera a 1-0 lead.
Felix Diaz and Joshua Short also scored before the half and Bryan Gonzalez scored at the 20 minute mark in the second half, giving Bandera a 4-0 lead.
The Wolves denied Bandera's shutout bid, scoring on a penalty kick and then shortly after to make it 4-2, before Diaz scored again to give Bandera a 5-2 lead.
"We were able to secure the first victory in district play since the Regional Finalist team of 2017. It could not have been done without a complete team effort. Defenders Ethan Brown, Wilber Zapeda-Diaz, Sam Nimmritchter and Logan Sadler all made key plays while Midfielders Bryan Gonzalez, Joshua Short, Miles Short, Beto Muzquiz and Jacob Haas controlled the tempo of the game allowing strikers Felix Diaz, Josue Enriquez and Cristian Garcia to stretch the field and place the ball in scoring positions," coach Westley Miller said.

Girls
Canyon Lake
The Bandera Lady Bulldogs lost to the Canyon Lake Lady Hawks last week by a 5-0 talley.
Bandera played good defensively in the first half, limiting Canyon Lake to just a single goal, but found the Lady Hawks solid defense hard to score against.
The Lady Hawks offense took over in the second half, scoring four goals to get the shutout.
Bandera netminders, Jasmine Thane and Maci Morrison, stopped 27 of 32 shots in the loss.
Coach Keith Kuenzel noted the defensive play of Hannah Edwards, Courtney Dowda, Lauren Benedict and Mia Ramirez in front of the goalie duo, helped to keep the score managable.

Softball
Bulldog Softball has a new look in the outfield with the addition of a new, updated scoreboard that was installed Thursday morning before the game against LaVernia.
The Lady Bears scored in the top of the first and Bandera answered in the bottom of the second with their only score to make it 1-1.
LaVernia scored in the top of the fourth, fifth and sixth innings to get the win.
Bandera's Aubrey Mangold had nine strikeouts and the team recorded eight hits and four errors in the loss. 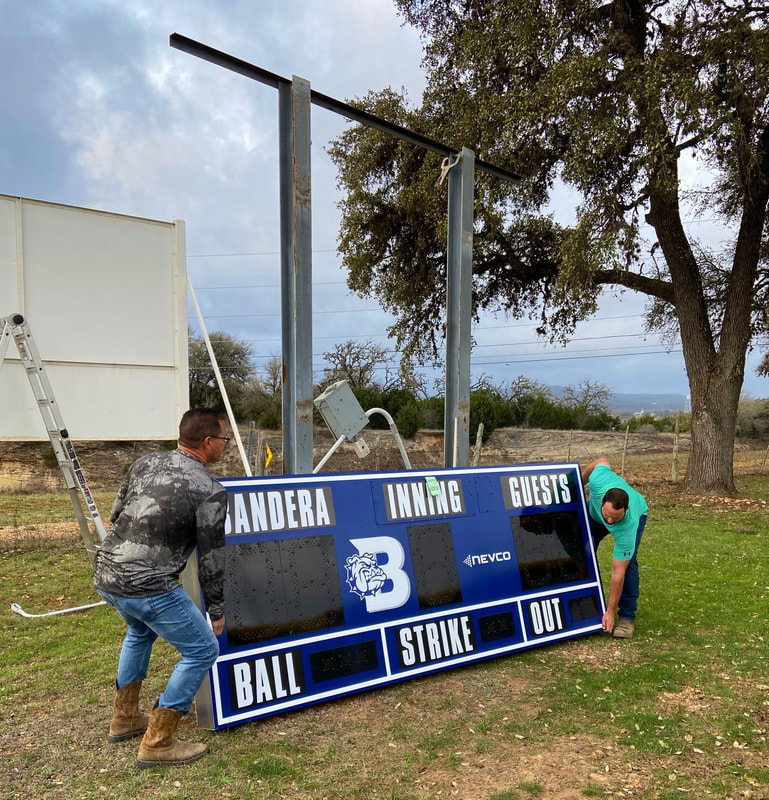 Workers from National Scoreboard and Display Services position the new scoreboard for the softball field in Bandera.
The Bandera Prophet is grounded on the premise that relevant news delivery is ever-evolving. Founded by newspaper veterans, the Prophet delivers up-to-date information by writers and photographers who combined have 50-plus years of experience in the field and newsroom. Completely free to readers, the Prophet is published on multiple platforms, and shared within the online community. No paywalls and no paid subscriptions
make news, sports, feature stories and more immediately available with one click of a button or one swipe on a keypad.
All content copyright property of The Bandera Prophet