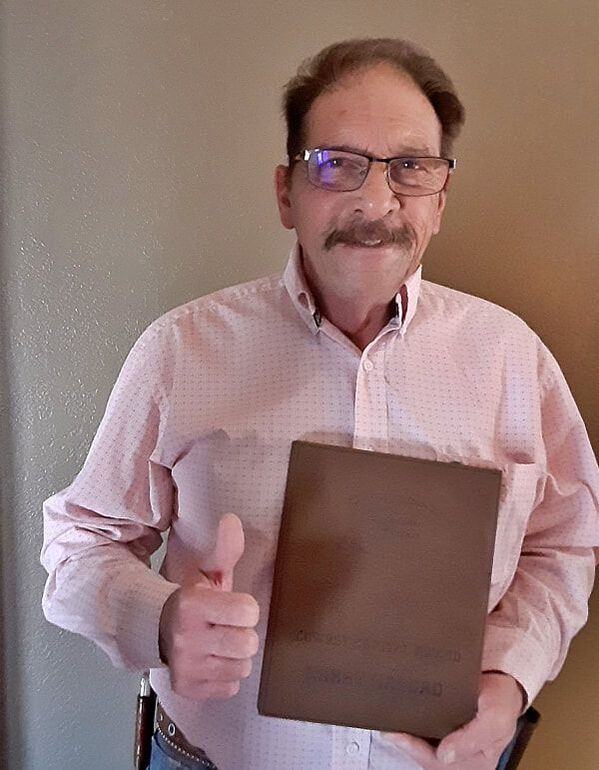 During the annual Bandera County Chamber of Commerce Gala, awards were presented to members in recognition for the work and the differences they made in the community during 2020. The Bandera Prophet’s Larry Haddad was named this year’s Cowboy Capital Award recipient.
The Cowboy Capital Award “is given to the individual who has made an outstanding contribution to Bandera’s image as the ‘Cowboy Capital of the World.’”
In addition to the work he does for the Prophet, Haddad is webmaster and owner of website design company Web-Wagon, owner of Studio 173 Hair Salon and music store, and of course, the well-known artist behind Caddo Kuntree.
Other award recipients from last week’s Gala include:
The Citizen of the Year Award was given to John Cressey-Neely;
The Business Community Service Award winner was Bandera General Store;
The Volunteer of the Year Award was given to Jack Moseley;
The Directors’ Award was given to Tim and Vanessa Churchman;
The Wilton Crider Cowboy Preservation Award was given to Kelly Scott.
The Bandera Prophet is grounded on the premise that relevant news delivery is ever-evolving. Founded by newspaper veterans, the Prophet delivers up-to-date information by writers and photographers who combined have 50-plus years of experience in the field and newsroom. Completely free to readers, the Prophet is published on multiple platforms, and shared within the online community. No paywalls and no paid subscriptions
make news, sports, feature stories and more immediately available with one click of a button or one swipe on a keypad.
All content copyright property of The Bandera Prophet