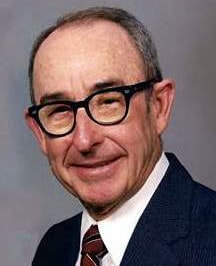 Charles William Weber, Jr. (Bill) died April 10, 2021. Born July 7, 1922 in Abington, Penn. and raised in Auburndale, Fla., Bill graduated from Auburndale HS in 1940, attended the Texas College of Mines in El Paso, and enlisted in the army in 1942.
He served in the Army Corps of Engineers in the Pacific theater during World War II, then graduated from Georgia Institute of Technology in 1948, with a B.S. in Civil Engineering.
Bill moved to Texas for employment as civil engineer, finding a home in Houston and at Brown and Root as a design civil engineer in 1952. He married Marianne Schoenerstedt in 1954 and adopted her two children Judith Gale (Judy) and David Bates. Their marriage was blessed with Charles William Weber, III (Chuck) and Richard Miles.
Bill retired in 1983 from Brown and Root and relocated with Marianne to their beloved ranch in Medina.
Bill’s parents Charles William Weber, Sr. and Edna Frances Weber (nee Willard), sister Frances Willard Weber, daughter Judy, and son David preceded him in death.
He is survived by Chuck and wife Debbie of Boerne; Richard of Ypsilanti, Mich.; granddaughters Katy of Decherd, Tenn., and Erika of Midland; great-grandsons Calum Runge and Crosby Rowe; and dear friend and companion Edra Bowdle.
Services will be on Friday, April 23, at 1 p.m., at St. Christopher’s Episcopal Church in Bandera, graveside to follow.
Family requests for donations to Peterson’s Hospice in Kerrville, or the Medina Community Library in Medina.
The Bandera Prophet is grounded on the premise that relevant news delivery is ever-evolving. Founded by newspaper veterans, the Prophet delivers up-to-date information by writers and photographers who combined have 50-plus years of experience in the field and newsroom. Completely free to readers, the Prophet is published on multiple platforms, and shared within the online community. No paywalls and no paid subscriptions
make news, sports, feature stories and more immediately available with one click of a button or one swipe on a keypad.
All content copyright property of The Bandera Prophet