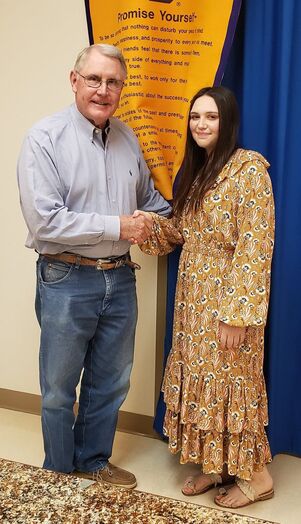 Bandera High School senior Kailey Gembler was recognized by Optimist Club board members during their regular meeting held April 28.
Gembler was named April Student of the Month by Bandera ISD administrators and teachers, who collectively described her as a wonderful student. Active in basketball and other activities, Gembler has focused her attention on theater, and is president of the theater club. She has been accepted into the theater program at San Angelo University, where she plans to major in theater. Her ultimate goal, she said, is return to Bandera ISD as a theater teacher.
Also named April Student of the Month was Irving Rodriguez.
In other business, Sally Jones, a docent at the Bandera Natural History Museum, delivered a presentation on the museum and its new art wing, the New Spain Art Hall.
The hall features art from the New Spain era, circa ~1500 - 1800, which is on permanent loan from Juan and Mary Infante, of Medina.
The New Spain territory covered portions of Canada, the United States, Mexico, Central America, and a portion of South America, as well as the Philippines.
The art of the New Spain era is influenced by Asia and Europe, styles picked up from the trade route. Many of the pieces represent Catholicism, the primary religion of Spain at the time.
To see more about the Bandera Natural History Museum and the New Spain Art Hall, go to www.facebook.com/BanderaNHMwww.facebook.com/BanderaNHM
The next regular Optimist Club meeting will be May 19, at the Bandera ISD administration building.
The Bandera Prophet is grounded on the premise that relevant news delivery is ever-evolving. Founded by newspaper veterans, the Prophet delivers up-to-date information by writers and photographers who combined have 50-plus years of experience in the field and newsroom. Completely free to readers, the Prophet is published on multiple platforms, and shared within the online community. No paywalls and no paid subscriptions
make news, sports, feature stories and more immediately available with one click of a button or one swipe on a keypad.
All content copyright property of The Bandera Prophet