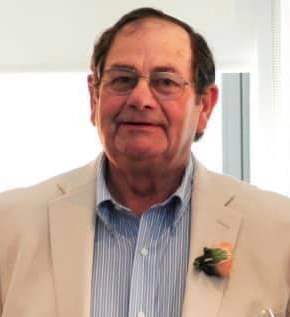 Kenneth Doyle D’Spain, of Bandera, passed away on May 24. He was born in Brady on June 6, 1938. He was the son of Nimrod “Doc” Johnson D’Spain and Otelia Pool. He was the brother of LaVern Wharton, Carol D’Spain and Willard D’Spain.
Kenneth attended Bandera High School where he was voted Class Favorite and Best Dancer. He made many lifelong friends at Bandera High School. This is also where he met his high school sweetheart, Betty Jane Laskowski. Kenneth and Betty were married at St. Stanislaus Church in Bandera on May 28, 1959. As luck would have it, Kenneth’s daughter Daphne inherited his awesome dance skills, and his three sons just happen to have his handsome good looks.
Kenneth played football for the Bandera Bulldogs and participated in FFA rodeo events. Kenneth won FFA All Around Champion for his participation in rodeo and bull-riding each year that he attended Bandera High School. Kenneth then went on to attend Sul Ross State University in Alpine on a football scholarship and continued bull-riding throughout his years at Sul Ross.
Kenneth was employed with Continental Oil Company at The Purple Sage Ranch in Bandera for nearly 10 years. Betty and Kenneth then moved the family to Green River, Wyoming, and they enjoyed living there for nearly 40 years. During their time in Wyoming, Kenneth coached football and softball and the family developed many friendships that endure today. Betty and Kenneth retired back to Bandera in 2008 after Kenneth retired from a 35-year career at General Chemical (now Tata Chemicals) in Green River, and Betty retired as a Director from the American Cancer Society.
Kenneth is pre-deceased by his mother and father; and his brother Carol.  Kenneth is survived by his wife Betty D’Spain; and his children Kenny, Rodney, Robert and Daphne. He is also survived by his grandchildren Tyler, Andrew, Chantalle, Taylor, Matthew, Ethan, Kendric, Keenan and Declan; and his great-granddaughter, Lyra.
Kenneth was a gentle, kind, loving person and he loved his family so much. His stories and his memory will eternally be our blessing.

Masses will also be offered for the Kenneth D’Spain in Green River at the Immaculate Conception Church on June 14 at 8:30 a.m., and June 27, at 11 a.m.

The family graciously welcomes any donations The Alzheimer’s Association.
https://act.alz.org/site/Donation2?48080.donation=form1&df_id=48080&mfc_pref=T&32112.donation=&utm_source=google&utm_medium=paidsearch&utm_campaign=google_giving&set.custom.wt=giving&gclid=CjwKCAjw47eFBhA9EiwAy8kzNA6lC3OveaY9ooagp5g16gqm5NzrRqurbcV7I_bkbCBzWgAljR7IrBoC948QAvD_BwE
The Bandera Prophet is grounded on the premise that relevant news delivery is ever-evolving. Founded by newspaper veterans, the Prophet delivers up-to-date information by writers and photographers who combined have 50-plus years of experience in the field and newsroom. Always free to readers, the Prophet is published on multiple platforms, and shared within the online community to more than 150,000 people. No paywalls and no paid subscriptions make news and feature stories immediately available with one click of a button or one swipe on a keypad.
​
All content copyright property of The Bandera Prophet