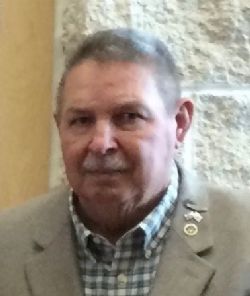 Richard Lee Keese, 76, of Medina, passed away Wednesday, Sept. 1, 2021 in Kerrville. He was born Sept. 17, 1944 in Kerrville to Howell Keese and Stella Henderson Keese, the second of four children.
Richard graduated from Kerrville Tivy High School in 1962. After school, he enlisted in the US Air Force. During his enlistment, he served in Southeast Asia as a radar operator.
He started his career in the oil and gas industry and used his GI Bill to graduate college from Sul Ross in 1970 with a BS in Business Administration.
He met his wife Sherrie while in college and they were married in Monahans on Jan. 3, 1970. They were blessed to add their two sons, Hal and John, to this union. The birth of their two grandsons, Call and Cord, added more joy.
Richard served 14 years in the Texas National Guard. He retired from the oil and gas industry in 2015. He also served Bandera County as Precinct 3 Commissioner for three terms, a total of 12 years.
Richard is survived by his wife Sherrie of 50-plus years, of Medina; his oldest son Howell (Hal) Keese of Medina; his youngest son John Keese and his wife Angie of LaVernia; his grandsons Call and Cord Keese, of La Vernia; brother Keith Keese and sister Karen Keese, both of Medina; father-in-law John E. Miller Sr., of Bandera; brother-in-law John (Jay) Miller Jr. and wife Patricia, of Pipe Creek; and many nieces and nephews.
He was preceded in death by his parents Howell and Stella Keese; his brother Orville Keese; and his mother-in-law Peggy B Miller.
Funeral services are scheduled for 10 a.m. Monday, Sept. 6, at Oak Rest Cemetery in Medina.
Pallbearers are Tom Carpenter, David Rees, Henry Hubble, Jamie Bocock, Neal Keiser and Andy Lautzenheiser. Honorary pallbearers are John (Jay) E Miller Jr., Bob Bocock and Allen Stieler.
In lieu of flowers, the family requests memorials be given to Peterson Hospice of Kerrville, Medina Library or Medina First Baptist Church.
The Bandera Prophet is grounded on the premise that relevant news delivery is ever-evolving. Founded by newspaper veterans, the Prophet delivers up-to-date information by writers and photographers who combined have 50-plus years of experience in the field and newsroom. Completely free to readers, the Prophet is published on multiple platforms, and shared within the online community. No paywalls and no paid subscriptions
make news, sports, feature stories and more immediately available with one click of a button or one swipe on a keypad.
All content copyright property of The Bandera Prophet