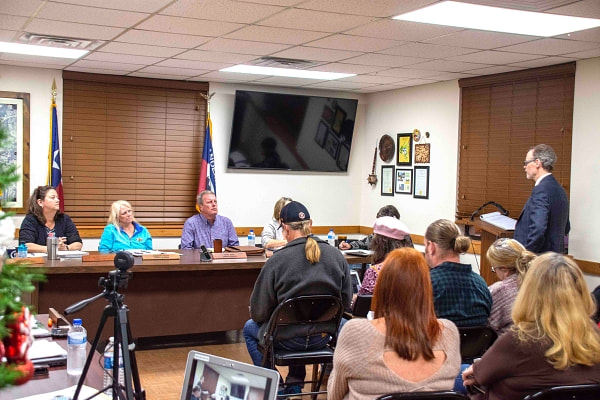 After deliberating in closed session for more than an hour, Bandera City Council members unanimously rejected former Deputy William Smith’s appeal of his termination from the Marshal’s Office.
“He is probably the most effective deputy you had on your city marshal’s force,” Smith’s attorney Shawn Fitzpatrick said during the public forum of Tuesday night’s regular meeting.
Fitzpatrick said Smith was notified Nov. 24 of his termination, for reasons he did not disclose other than he “is accused of making some comments that had nothing to do with his job.” He said the city has a progressive disciplinary policy, which he said was not implemented in Smith’s case. Every disciplinary policy has an escape clause in which an employer can terminate anyone for any reason, Fitzpatrick said, but he questioned the point of the policy if it is not utilized.
“We’re asking you to reverse the termination,” Fitzpatrick said.
Neither Smith, nor Fitzpatrick, were invited to participate in the executive session. Other than the final vote, council members did not comment further.
The Bandera Prophet is grounded on the premise that relevant news delivery is ever-evolving. Founded by newspaper veterans, the Prophet delivers up-to-date information by writers and photographers who combined have 50-plus years of experience in the field and newsroom. Completely free to readers, the Prophet is published on multiple platforms, and shared within the online community. No paywalls and no paid subscriptions
make news, sports, feature stories and more immediately available with one click of a button or one swipe on a keypad.
All content copyright property of The Bandera Prophet