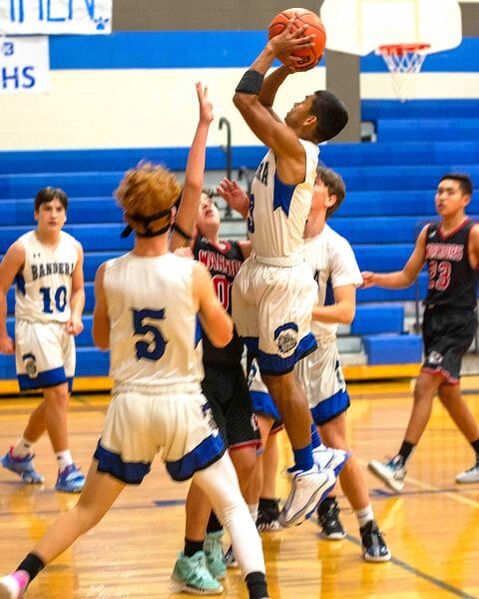 Varsity
The Bandera varsity boys basketball team improved to a perfect 4-0 at home with a 61-45 win over Ingram Tuesday night.
The Bulldogs pulled away early in the third quarter thanks to a series of defensive stops that led to points in transition for the home team.
Bandera outscored the Warriors 36-22 in the second half, thanks in part to a strong fourth quarter from freshman Eli Salas, who finished with 9 points, all in the final eight minutes.
Bandera improves to 7-4 on the season with the win.
Coach’s Notes: “Ingram hit some shots in the first half and we cam e out slow offensively, but the guys did a good job of creating turnovers early in the third quart er to start to pull away. We have to continue to work on starting with more intensity, but we did a good job of winning the rebounding battle from start to finish and of attacking the rim and making plays offensively down the stretch. We will have another chance at four games in three days this weekend and we’re looking forward to continuing to grow as a team early in the season.”
The Bulldogs will look to extend their winning streak to three games when they travel this weekend for the Comfort Tournament.

Bandera stats:
Scoring: Ryan Perez, 16, Tyler Moore, 13, E. Salas, 9, Noah Barnett, 8, Kayden Brown, 5, Cale Barnett, 4, Joseph Kennedy, 2, Kyle Morgan, 2, Gavin Oritz, 5
Assists: N. Barnett, 5, Perez, 4, Brown, 2, Kennedy, 2, Ortiz, 2
Rebounds: N. Barnett, 9, Moore, 7, Ortiz, 4, Perez, 4, Kennedy, 3
Steals: Perez, 5, N. Barnett, 2, Brown, 2, Kennedy, 2, Moore, 2
JV
The JV Bulldogs used a full court press to jump all over In gram in the first quarter and never looked back on their way to a dominant 85-22 victory Tuesday night.
The Bulldogs outscored the Warriors 45-9 in the first half and continued their impressive defensive effort through the final two quarters, allowing Ingram to score just 13 second half poi nts. Bandera shared the ball effectively on offense as well, with all 14 Bulldog players contributing on the scoreboard in the win.
Jesse Cardenas led all scorers with 15 points while Isaac Segura added 12.
The Bulldogs improve to 4-2 on the season and will comp ete in their first tournament of the year this weekend as they travel to Navarro on Thursday.
Bandera scoring: J. Cardenas, 15, Isaac Segura, 12, Zachary Quesnot, 9, Corben Gonzales, 8, Jorge Cabasos, 6, Alex Dirck, 6, Salvador Enriquez, 5, Hank Pate, 5, Hudson Jackson, 4, K yle Moore, 4, David Padgett, 4, Tim Danour, 3, Logan Bourgeois, 2, Adan Ramos, 2
The Bandera Prophet is grounded on the premise that relevant news delivery is ever-evolving. Founded by newspaper veterans, the Prophet delivers up-to-date information by writers and photographers who combined have 50-plus years of experience in the field and newsroom. Completely free to readers, the Prophet is published on multiple platforms, and shared within the online community. No paywalls and no paid subscriptions
make news, sports, feature stories and more immediately available with one click of a button or one swipe on a keypad.
All content copyright property of The Bandera Prophet