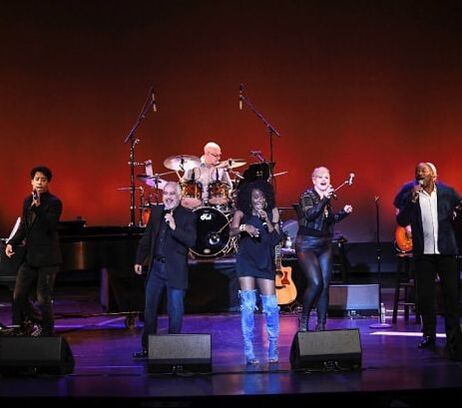 Boerne Performing Arts is pleased to welcome composer, musician, and producer Neil Berg and his outstanding group of musicians and vocalists to perform “50 Years of Rock N Roll.”
After having to cancel the entire 2021 season due to the covid pandemic, organizers are thrilled to reschedule the performance which will bring some of the most talented singers on Broadway and Rock and Roll music to the stage at Boerne Samuel V. Champion High School Auditorium on Saturday, Jan. 29.
The evening will celebrate the iconic music, history, and often unknown stories from the first 50-year span of the music that changed the world forever. The music is arranged and woven together by emcee Neil Berg, who “tells the story of America since the 1930s, and all the incredible influences and cultures that make up our ‘melting pot,’ which is poured into the fabric of our music, which influenced generations around the world.”
From the earliest creators of Rock and Roll music in the 1940s, through the glory years of the ‘50s, ‘60s and ‘70s, up until MTV in the early ‘80s, Neil Berg’s “50 Years of Rock N Roll” uses fascinating stories and groundbreaking music with tributes to such important and iconic rock stars/groups/genres as Chuck Berry, Little Richard, Elvis Presley, Ray Charles, Buddy Holly, Bob Dylan, Frankie Valli, The Beatles, Beach Boys, Motown, Aretha Franklin, The Who, Janis Joplin, Woodstock, Simon & Garfunkel, Carole King, Led Zeppelin, Elton John, Stevie Wonder, Billy Joel, Aerosmith, Linda Ronstadt, Bruce Springsteen, Eagles, Fleetwood Mac, Disco, New Wave, Journey, and others.
The five supremely talented vocalists performing are drawn from the stars of Broadway’s greatest rock musicals and Rock and Roll artists. Each performer could justifiably headline the entire show but, as part of an ensemble, each gifted artist lends their vocal brilliance to an evening of top-notch entertainment.
In addition to opening the 2022 regular season, the performance also marks Boerne Performing Arts’ tenth anniversary. Helping to celebrate this milestone and the performance that night are sponsors City of Boerne, the GVTC Foundation, Hearts’ Home Acoustics and Sonora Bank.
Thanks to generous donors and sponsors, the artists will also present a Boerne Performing Arts FOR KIDS concert during school hours for 1,000 BISD fifth grade and secondary Fine Arts students as a special student outreach.
Before the concert begins, music will be provided in the lobby by the Boerne High School Chamber Singers under the direction of Nancy West. Concessions will be available from the Boerne Charger Orchestra Parent Organization and artwork will be on display by students representing Cibolo Creek, Curington, Fabra, Fair Oaks Ranch, Herff, Kendall and Van Raub elementary schools.

Tickets ($20-$60) for this and all other Boerne Performing Arts events can be found online at www.BoernePerformingArts.com; in person at the Greater Boerne Chamber of Commerce; and phone requests may be made at 830-331-9079.
Come and be a part of making this another shared moment in the collective memory of Boerne Performing Arts’ patrons and audience members.
The Bandera Prophet is grounded on the premise that relevant news delivery is ever-evolving. Founded by newspaper veterans, the Prophet delivers up-to-date information by writers and photographers who combined have 50-plus years of experience in the field and newsroom. Always free to readers, the Prophet is published on multiple platforms, and shared within the online community to more than 150,000 people. No paywalls and no paid subscriptions make news and feature stories immediately available with one click of a button or one swipe on a keypad.
​
All content copyright property of The Bandera Prophet