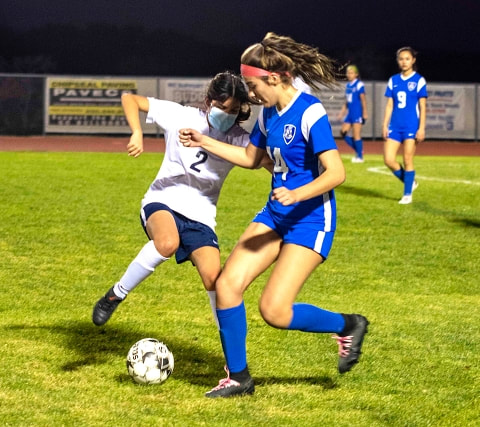 Players vie for control in the 1-0 Bandera loss to YWLA Tuesday night.

The Lady Bulldogs soccer team went 1-1 last week and got their first "W" of the season.
Bandera battled with Young Womens Leadership Academy (YWLA) at home Tuesday night and fell, 1-0.
It was a defensive match as neither team moved the ball very well offensively.
The Lady Bulldogs stand-outs were Bietzel Gonzalez, Taum Hubble, Jaydin Coiner, Lauren Benedict and Jetta Martinez.
Friday night, Bandera hit the road to Yoakum and came home with their first win of the season, 2-0. Bandera played an outstanding defensive game, only allowing three shots on goal.
Hannah Edwards scored both goals for Bandera. Defensive standouts were Jaydin Coiner, Ashlyn Brown, Emily Presa and Sydney Jaeger.
Bandera is in Hondo tonight for their final pre-district game of the season.
The Bandera Prophet is grounded on the premise that relevant news delivery is ever-evolving. Founded by newspaper veterans, the Prophet delivers up-to-date information by writers and photographers who combined have 50-plus years of experience in the field and newsroom. Completely free to readers, the Prophet is published on multiple platforms, and shared within the online community. No paywalls and no paid subscriptions
make news, sports, feature stories and more immediately available with one click of a button or one swipe on a keypad.
All content copyright property of The Bandera Prophet