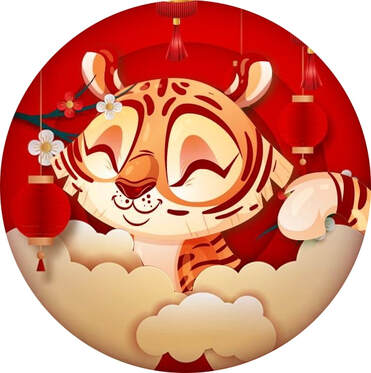 Welcome to the Year of the Tiger

This year, the Lunar New Year falls on Tuesday, Feb. 1 and lasts until Feb. 15, with the Lantern Festival marking the final day of the two-week-long celebration.
The Lunar New Year occurs when the moon moves into line with the earth and the sun (the new moon), typically between the end of January and middle of February. The lunar month has 29 or 30 days, versus the Gregorian calendar - calculated by the movement of sun - which has 30 or 31 days per month (with the exception of February). The lunar calendar is 21 to 51 days behind the Gregorian calendar.
On the zodiac, the tiger is the third in the 12-animal cycle. Tigers were born in 2010, 1998, 1986, 1974, 1962, 1950, 1938, and so on. People born in the Year of the Tiger tend to be powerful, rebellious, dynamic, adventurous, fiery, impulsive and unpredictable. Tigers also typically have strong ethics, and are passionate about causes. 2022 is the Year of the Water Tiger, referring to the elements fire, earth, metal, water and wood. The water tiger is more open-minded and less aggressive.
Celebratory foods prepared during the Lunar New Year include dumplings and fish, which symbolize wealth and luck, respectively.
The Bandera Prophet is grounded on the premise that relevant news delivery is ever-evolving. Founded by newspaper veterans, the Prophet delivers up-to-date information by writers and photographers who combined have 50-plus years of experience in the field and newsroom.
Completely free to readers, the Prophet is published on multiple platforms, and shared within the online community. No paywalls and no paid subscriptions required, the Prophet is built on the belief that information is so necessary to our community, that it should not depend on your income.
At the Prophet, news, sports, feature stories and more are immediately available with one click of a button or one swipe on a keypad.
All content copyright property of The Bandera Prophet