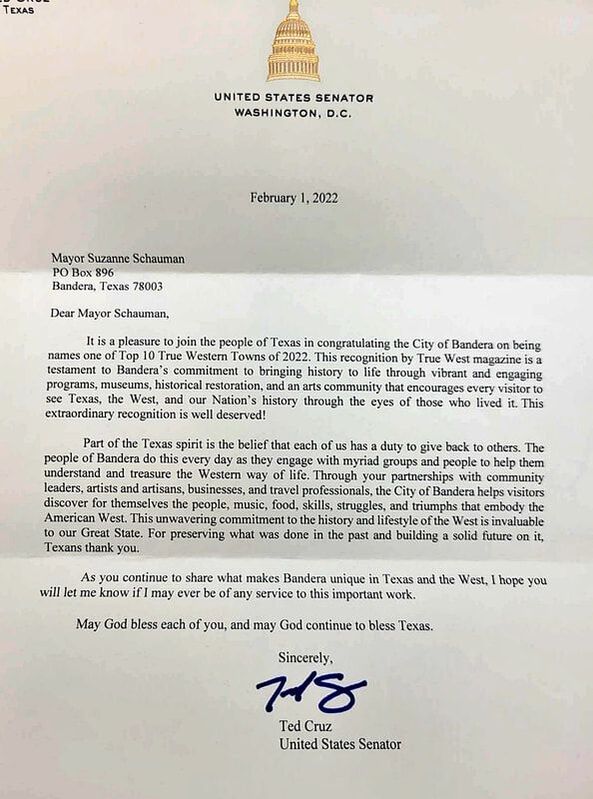 The City of Bandera has been named one of the Top 10 True Western Towns of 2022 by True West magazine.
In a letter from U.S. Senator Ted Cruz, City of Bandera Mayor Suzanne Schauman was informed of the designation.
“Part of the Texas spirit is the belief that each of us has a duty to give back to others,” Cruz said. “The people of Bandera do this every day as they engage with myriad groups and people to help them understand and treasure the Western way of life.”
In addition, Bandera received a second award from True West magazine recognizing Bandera as the “Best Place to Live Like an Old West Cowboy,” according to Convention and Visitor’s Bureau Executive Director Patricia Moore.
“We are extremely proud to be recognized as a community that strives to keep the history, authenticity and uniqueness of Western Cowboy culture,” City Administrator David Jordan said. “This award helps remind everyone that Bandera is The Cowboy Capital of the World!”
The Bandera Prophet is grounded on the premise that relevant news delivery is ever-evolving. Founded by newspaper veterans, the Prophet delivers up-to-date information by writers and photographers who combined have 50-plus years of experience in the field and newsroom. Completely free to readers, the Prophet is published on multiple platforms, and shared within the online community. No paywalls and no paid subscriptions
make news, sports, feature stories and more immediately available with one click of a button or one swipe on a keypad.
All content copyright property of The Bandera Prophet