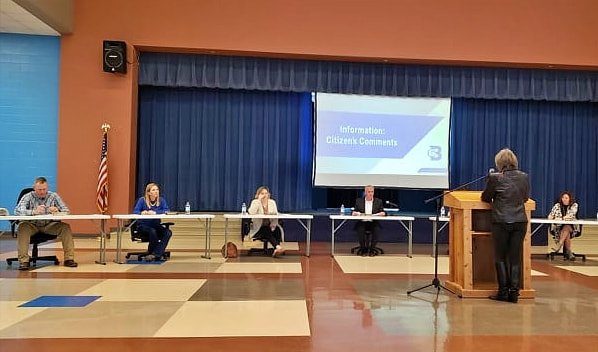 Susan Hull speaks during the public forum of the Bandera ISD board meeting on Monday, Feb. 14.

In a unanimous decision, Bandera ISD board trustees tonight voted against a Chapter 313 agreement requested by Montague Solar LLC, terminating the comptroller application under the Texas tax code.
The regular meeting was moved from the administrative offices to the Bandera Middle School cafeterium, where about 100 people were in attendance. Several people urged the board to deny the tax abatement request, the first being Susan Hull, who said Chapter 313 applications were the subject of bipartisan rejection in the Texas Legislature this year.
“Both sides agreed that it should not be renewed at the end of this year,” Hull said, adding a massive rush of corporations have begun submitting applications to beat the final deadline.
It’s otherwise known as corporate welfare, Hull said, stating, “They’re asking for a tax abatement. They’re saying ‘we’re going to give you this money that you won’t have to share with the state.' The money they’re offering is a tiny percentage of what they’re gaining, and they’re giving nothing back. They’re trying to trick you that there’s something in it for Bandera, but there isn’t.”
Janice Mikeska expressed concern for decreased property values, which she said could drop up to 20 percent. She said she retired to a property three miles from the proposed solar farm site, so the impact would affect her directly.
“We should not be helping Pine Gate,” Mason Hunt said, adding he would help raise money for the district’s needs. “We can raise funds and keep your coffers full. I’m respectfully asking you to vote against this application.”
The application was filed under the umbrella of Montague Solar parent company Pine Gate Renewables, which has proposed a multi-million dollar 1,000-acre solar farm project on FM 3240. Pine Gate Senior Manager Alan Hancock said his company is still determining whether to file 313 applications with the county and groundwater district, as taxing entities. Although the school district voted it down, Hancock said during a Q&A forum in January that the company does not require the district’s cooperation to proceed.
Following Monday night’s vote, Board President Brittany Hicks thanked the community for speaking before the board, and meeting with Superintendent Gary Bitzkie to discuss the issue.
“This board loves Bandera and they want the best for our children and our community,” Hicks said.
She said the board was compelled to consider the application as a business matter, because of the funding potential it may have represented.
“We need new roofs, we need new HVAC systems,” Hicks said. “We have children in our school district who are homeless…we want them to be able to come to a safe place…this is the only place where they can have a meal every day.”
Hicks also thanked those who spoke for offering to help.
“I continue to ask all of you to be positive, and let’s keep this momentum going for our school,” Hicks said.
The Bandera Prophet is grounded on the premise that relevant news delivery is ever-evolving. Founded by newspaper veterans, the Prophet delivers up-to-date information by writers and photographers who combined have 50-plus years of experience in the field and newsroom. Always free to readers, the Prophet is published on multiple platforms, and shared within the online community to more than 150,000 people. No paywalls and no paid subscriptions make news and feature stories immediately available with one click of a button or one swipe on a keypad.
​
All content copyright property of The Bandera Prophet