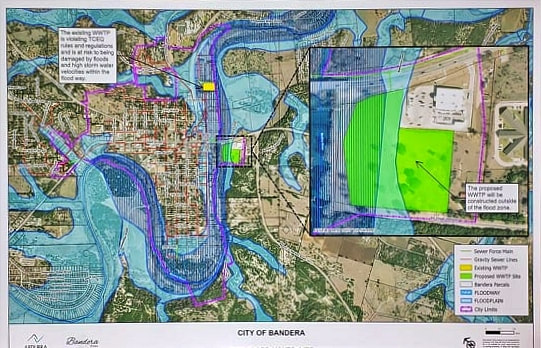 As they inch closer to relocating the municipal Wastewater Treatment Plant, Bandera City Council members discussed logistics during a Tuesday night workshop.
The facility, in place for nearly 50 years, must be moved out of the floodplain, per the Texas Commission on Environmental Quality. Derek Naiser, operations director and managing principal at Ardurra Group of San Antonio, said a feasibility study to look at suitable relocation areas was done about two years ago. He said a target property has been identified as a potential operating site, and now the city has two options: to discharge at the same location, or at the new one.
Council members inquired about a Texas Land Application Permit (TLAP) to dispose of treated effluent on the land surface, however Naiser said that could increase costs due to different land requirements and the city’s expected growth.
“It’s something we can look into to, or something we can look into later on,” Naiser said.
Council Member Jerry Russe said he would like to see the possibility of a TLAP explored before making any final decisions.
“To do the same old thing again, financially it may be the way we’re going, but I would like to see it presented,” Russe said. “We don’t know what the cost difference will be. We don’t have a clue.”
Council Member Rebeca Gibson concurred, stating council has consistently requested information on how to change the way the city uses effluent.
“What are some creative ideas that other communities are using,” Gibson said, while also foreboding the community may not be completely on board. “I have seen grassroots movements come up for other discharge permits.”
Concerned about cost, Mayor Suzanne Schauman said the $15 million budget is based on a “modern version of where we started 50 years ago,” without alternative ways of dealing with treated sewage and solids.
“It all boils down to, we can’t buy a Cadillac with a Chevrolet budget,” Schauman said.
For now, the city awaits a decision on three grants, which if approved could completely pay for the initial project budget as is. As a last resort, City Administrator David Jordan said the city could borrow money from the Texas Water Development Board with a potential debt forgiveness of 70 percent.
Ben Rosenberg, managing director of the public finance group U.S. Capital Advisors, said “green” methods of discharge open more funding opportunities, but not much.
“It’s not a showstopper, but there is more money out there,” Rosenberg said, adding no decisions need to be made until word from the grant applications is received.

In other business, council members continued their discussion about the ongoing problem of short-term rental owners not making the required HOT (Hotel Occupancy Tax) payments.
“The question posed was how can we regulate short-term rentals. In order to do that, you have to have a system that you know where the properties are,” City Attorney Dan Santee said.
Santee said cities similar to Bandera struggle with the airbnb and vrbo market, which may negatively impact residents with traffic, parking and noise, and drive property taxes up. He said fewer affordable housing and starter homes are generally available for full-time residents in small towns full of short-term rentals.
Santee said potential solutions include regulating land use or special use permits, neither of which come without issues - such as overly burdening existing property owners and maintaining consistency.

=Finally, Cindy Beckham of the Bandera Business Association told council during the public forum that they, with the Bandera County Chamber of Commerce, are looking at different venues for the 2022 RiverFest. Last year, the annual event moved from Bandera City Park to the Twin Elm Guest Ranch.
“We are looking at options and how we can work together,” Beckham said, who asked to have the item placed on a future agenda for City Council review.
The Bandera Prophet is grounded on the premise that relevant news delivery is ever-evolving. Founded by newspaper veterans, the Prophet delivers up-to-date information by writers and photographers who combined have 50-plus years of experience in the field and newsroom. Always free to readers, the Prophet is published on multiple platforms, and shared within the online community to more than 150,000 people. No paywalls and no paid subscriptions make news and feature stories immediately available with one click of a button or one swipe on a keypad.
​
All content copyright property of The Bandera Prophet