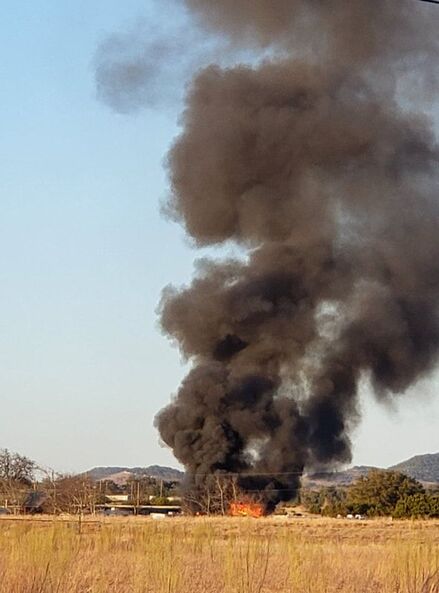 Firefighters worked quickly to contain an RV fire on Feb. 11 off of Hwy. 16 in Bandera.

In the last two-and-a-half months, Bandera County fire fighters have responded to 183 fire calls, according to Fire Marshal Jason Rutherford.
In his report to commissioners on Thursday, Rutherford said since December, January and in February thus far, there have been 32 brush fires, 14 confirmed structure fires, and eight vehicle fires. He said 13 prescribed burns were approved, compared to 26 unauthorized burns, some of which were cited with tickets and fines.
“The fire departments have been busy in Bandera County. They’re doing a good job keeping up with demand,” Rutherford said, adding in the last two months, 12,071 people have called in asking to, or inquiring whether it was safe to burn.
Rutherford said the Red Cross has assisted with three different families whose homes were lost or severely damaged by fire. He said he will meet with Red Cross representatives on Wednesday to discuss the launch of a free smoke detector program for county residents.

Sheriff Dan Butts said last month deputies traveled 25,498 miles, received 1,067 incoming 911 calls, and responded to 446 calls for service. He said the average response time was 13.45 minutes. The Sheriff’s Office provided 29 agency assists, was the primary responder for two city calls, served 143 warrants, and investigated 23 property crimes and 45 crimes against a person. There were 36 bookings into the jail, 15 out-of-county transports, and the average inmate population was 51, two of whom were contract inmates.
Butts said there were 94 animal calls, pointing out about 21 percent of the incoming calls were animal related. He said 35 dogs were picked up by animal control, and the average dog population in the animal control facilty was 27.

*In other business, commissioners approved the purchase of a new ambulance and equipment. Items include a new cardiac monitor with five-year warranty plan, a new Stryker stretcher and power lift system, a Stryker intubation scope, and a Stryker LUCAS chest compression device with an extended six-year warranty plan.
“My goal is to get a LUCAS device on every unit,” EMS Director Shannon Griffin said. “Right now we have two.”
The total cost for the equipment is $120,514.36, which will be paid for by the Coronavirus State and Local Fiscal Recovery Funds, part of the American Rescue Plan Act of 2021.
Commissioners also unanimously approved the $267,037 purchase of a second new ambulance, with $118,000 new equipment, also to be paid for with the Fiscal Recovery Funds.
“We have to keep our ambulances turning over,” Pct. 4 Commissioner Jody Rutherford said, who asked the county auditor to bring a list of what has been spent so far with the rescue funds.
The ambulance is expected to arrive in March or April.
Griffin said she is applying for a $110,030 grant from the Perry and Ruby Stevens Foundation in Kerrville to purchase a third LUCAS device and new supervisor’s vehicle. She said she would like to buy a Ford F250 4X4 with a camper shell, which will replace the current 2016 Chevrolet Tahoe that has 215,000 miles. She said the transmission has been replaced and will soon need a new catalytic converter.
Griffin said if the grant is approved, she plans to keep the Tahoe as a back up.

*Commissioners discussed a preliminary plat request from Dollar General, across from the Flying L subdivision. Bandera County Engineer Dieter Werner said historically, when commercial properties develop, variances are requested for construction access and other road changes or improvements. In this case, Werner said, a variance does not appear justified because TxDOT (the Texas Department of Transportation) has approved an entrance off Hwy. 173.
Werner said there would be vehicle access off Wharton’s Dock Road, but truck traffic would come off Hwy. 173. Further, he said he did not anticipate increased traffic or heavy loads coming off the county road.
“I don’t see the impact that couldn’t be addressed with a concrete approach,” Werner said, adding he would request a traffic impact analysis - paid for by the developer - and present it to the court.

=*Commissioners unanimously approved the use of the courthouse front lawn on May 5 for National Day of Prayer. Christopher Dion, of White Rock Fellowship, said set up would take place at 5 p.m., the event would begin at 6 p.m., followed by clean-up that should be concluded by 8 p.m.
The Bandera Prophet is grounded on the premise that relevant news delivery is ever-evolving. Founded by newspaper veterans, the Prophet delivers up-to-date information by writers and photographers who combined have 50-plus years of experience in the field and newsroom. Completely free to readers, the Prophet is published on multiple platforms, and shared within the online community. No paywalls and no paid subscriptions
make news, sports, feature stories and more immediately available with one click of a button or one swipe on a keypad.
All content copyright property of The Bandera Prophet