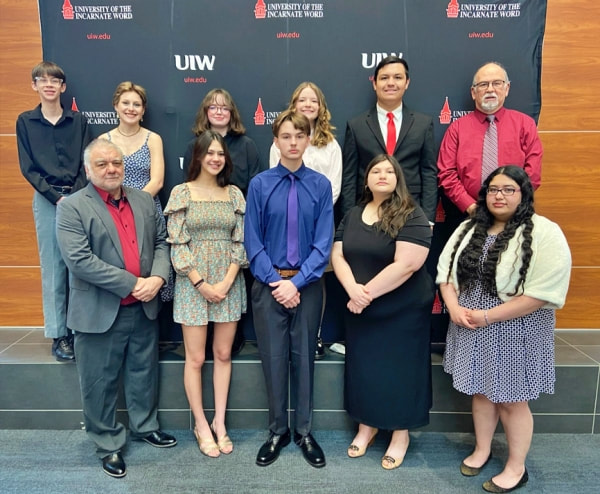 For the fourth consecutive year, the Beast does it again
Bandera Academic Decathlon Team brings home the gold

The Bandera Academic Decathlon Team competed at the state competition at the University of Incarnate Word, in San Antonio, Feb. 25 – 27, and for the fourth consecutive year, the team earned gold at state competition.
Bandera has been the champion of five state-level events and one national-level event within the past six years. This year, the team members have earned a total of $16,500 in decathlon scholarships.
The team members are Megan Mize, Savannah Venegas, William “Ozzie” Knowles, Laurel Morsi, Emily Ramos, Karina Garcia, Chandler Knowles, Christopher Pallesen and Riley Longobardi. The team is coached by Dan Zavorka and Joe Cortez.
The team is comprised of high school students who are divided into three divisions depending upon their grade-point average. These divisions are Honors, Scholastic and Varsity. The 4A varsity students compete against all other 4A varsity students from other teams, the 4A scholastic compete against 4A scholastic students, and 4A honors students compete against 4A honors students.

Additionally, five students were recognized for their overall top scores among the 4A schools:
Laurel Morsi – 5th overall Scholastic
William Knowles – 4th overall honors
Christopher Pallesen – 3rd overall varsity
Riley Longobardi – 3rd overall varsity
Chandler Knowles – 1st overall varsity
The Bandera Prophet is grounded on the premise that relevant news delivery is ever-evolving. Founded by newspaper veterans, the Prophet delivers up-to-date information by writers and photographers who combined have 50-plus years of experience in the field and newsroom. Completely free to readers, the Prophet is published on multiple platforms, and shared within the online community. No paywalls and no paid subscriptions
make news, sports, feature stories and more immediately available with one click of a button or one swipe on a keypad.
All content copyright property of The Bandera Prophet